Penny Lane is a Beatles song composed by Paul McCartney and John Lennon . It was released on February 13, 1967 under the copyright Lennon / McCartney together with Strawberry Fields Forever as a single with two A-sides. The two pieces were equally important to them; The group neither wanted nor could give preference and thus banish the other to the B-side .

The recordings for Penny Lane took place from the end of December 1966 to the first weeks of January 1967 in London's Abbey Road Studios . The piece was produced by George Martin .

The concise trumpet part was not planned at all; McCartney had the idea when he saw a performance of the Brandenburg Concerts by Johann Sebastian Bach on television . The solo from the 2nd Brandenburg Concerto was played by David Mason on a piccolo trumpet . In several recording sessions, basic tracks were first recorded and later overdubs with oboes and flutes were added.

In 1980 a hybrid of the German stereo version and the original ending of the song appeared on the American edition of Rarities , with David Mason's piccolo trumpet again, with Penny Lane ending on the promotional version distributed by Capitol Records in 1967 . For Anthology 2 a take with english horn was used, to which the ending with piccolo trumpet was added. In May 2017, on the fourth CD of the Limited Super Deluxe Edition for the 50th anniversary of the album Sgt.Pepper 's Lonely Hearts Club Band, a full version of the Capitol Records promotional mix from 1967 was first released on compact disc. 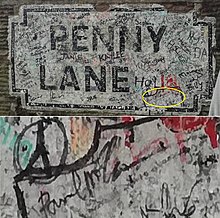 Penny Lane is a street in Liverpool that, due to the popularity of the song, kept the street signs stolen, so that they were eventually replaced by painted versions. The street is where John Lennon and Paul McCartney grew up. All the places and people mentioned in the song come from McCartney's memories or from a notebook in which he - as a young man waiting for John Lennon - wrote observations. The lyrical self stands at a bus station while it is pouring rain and observes everyday and strange things and people: a hairdresser who shows photos of all the people he knows in his salon. Many passers-by look in to say "Hello". Then there is talk of a bank clerk who never wears a Mack even in the pouring rain , of a firefighter with an hourglass and a portrait of the Queen in his pocket, of a pretty nurse who sells poppies. What is interesting about the descriptive text is the tension between the observations expressed in the song stanzas and the chorus , in which the lyrical self is under a summery blue suburban sky and remembers these observations. The words "four of fish and finger pie" (in German about "four fingertips and fish") in the lyrics are a hidden allusion to petting - and thus one of the few nonsense in the entire work of the Beatles.

Originally, Penny Lane and Strawberry Fields Forever were slated for release on Sgt. Pepper's Lonely Hearts Club Band album . Instead, both songs then appeared on a single. In the US , Capitol Records used the tracks to replenish the LP Magical Mystery Tour .

For Penny Lane one was promotion film rotated. The single was the only one, along with the debut single Love Me Do and Please Please Me , that did not reach the top position of the British charts, although it contains two of the band's most famous pieces. This was because the sales of the single were divided by two in order to be listed as two individual singles in the British charts. Instead, Engelbert Humperdinck took first place with the single Release Me .

In 1978 Udo Lindenberg covered the song under the German-language title Reeperbahn on his album Lindenbergs Rock Revue .

Albums by The Beatles