Federal Ministry for the Environment, Nature Conservation and Nuclear Safety 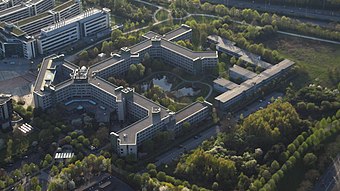 The Federal Ministry for the Environment, Nature Conservation and Nuclear Safety ( BMU for short ) is a supreme federal authority in the Federal Republic of Germany . Its head office or first office is located in the federal city of Bonn , its second office in Berlin .

Entrance area to the headquarters of the ministry in Bonn

The Chernobyl reactor disaster was the trigger for the establishment of the Ministry of the Environment . The Federal Ministry for the Environment, Nature Conservation and Nuclear Safety was founded on June 6, 1986, about five weeks after Chernobyl. With this step, the federal government at the time ( Kohl II cabinet ) wanted to consolidate the responsibilities in this sector under a new minister in order to better meet the environmental challenges. The French expert on Germany, Brigitte Sauzay, commented on this in her book Le vertige allemand , published in Paris that same year, with the words: “In Germany, the entire population feels addressed. The whole of social life is under the sign of ecological necessities; each of the political parties, above all the CDU, has written this dispute on their flags so as not to leave a field that is so important in terms of election tactics to the Greens. "

From its inception until 1998, the ministry was headed exclusively by CDU ministers. The first, Walter Wallmann , left the post eight months later when he became Prime Minister of Hesse . In particular, his successor Klaus Töpfer (May 1987 to November 1994), who later became Executive Director of the United Nations Environment Program , implemented numerous changes to environmental legislation . Angela Merkel was Environment Minister in the Kohl V cabinet (November 1994 to October 1998). She dismissed Clemens Stroetmann, State Secretary of many years, three months after taking office, because of irreconcilable differences.

In the red-green coalition of 1998 ( Cabinet Schröder I ) Jürgen Trittin (Greens) was given the ministerial office. This went hand in hand with a stronger focus on environmental protection and, in certain areas, a change in environmental policy, which was evident, for example, in the areas of nuclear phase-out , final storage of radioactive waste (see AkEnd ), one-way deposit (from January 1, 2003) and eco-tax . Trittin also held the office in the Schröder II cabinet . After the federal election in 2005 there was a change of government. The grand coalition ( Merkel I cabinet ) appointed Sigmar Gabriel (SPD) as environment minister.

In the black and yellow Merkel II cabinet (2009 to 2013), Norbert Röttgen (CDU) became Environment Minister. On May 16, 2012, Chancellor Angela Merkel surprisingly announced that she had asked the Federal President to dismiss Minister Röttgen (more in the article on Röttgen ). Successor was Peter Altmaier appointed.

In the black and red Merkel III cabinet , the area of ​​construction and urban development was separated from the Ministry of Transport on December 17, 2013 by organizational decree of the Federal Chancellor and incorporated into the BMU. For the next four years this was called the Federal Ministry for the Environment, Nature Conservation, Building and Nuclear Safety (BMUB). Barbara Hendricks (SPD) was the environment and building minister at this time .

In 2019, the Federal Ministry received a complaint from the Federal Audit Office for a lack of transparency with regard to the support services and advice that were used, which were at least 600 million euros expensive, in the period from 2014 to 2018.

The German Democratic Republic (GDR) had already formed its own ministry for environmental protection and water management in 1971 , 15 years before the Federal Republic. Minister ( Hans Reichelt ) had the longest term of office of almost 20 years from December 1971 to January 1990.

The nature conservation in East Germany suffered under conditions of massive promotion of brown coal , the strong chemistry program and among the small number of paid staff. A strong environmental movement had developed in the country long before the fall of the Berlin Wall . Their activists were members of the Kulturbund , church members and committed citizens.

The Federal Environment Ministry is in charge of environmental policy and matters of environmental and nature protection . The ministry is headed by the Federal Minister for the Environment, Nature Conservation and Nuclear Safety, who is currently under the responsibility of a permanent state secretary . The two Parliamentary State Secretaries appointed by the Minister have no control over the administration.

Organizationally, the ministry is divided into eight departments:

The BMU can draw on the expertise and statements of various expert bodies, namely the Council of Experts on Environmental Issues (SRU), the German Advisory Council on Global Change (WBGU), the Reactor Safety Commission (RSK), the Radiation Protection Commission (SSK), and the Waste Management Commission (ESK), the Commission for Plant Safety (KAS) and the Environmental Verification Committee (UGA). 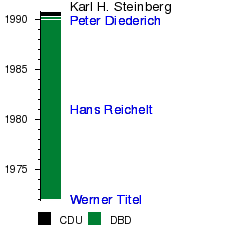 In Bonn, the BMU resides at Robert-Schuman-Platz 3, in the middle of the former government district. There are also buildings of the former Federal Post Office , some of which are used by the BMU. Under one of these buildings there is a now decommissioned nuclear bunker . The BMU is located in the western and southern parts of the building complex. The eastern part is occupied by the BIBB, the Federal Institute for Vocational Training. The pavilions to the north also use areas of the BIBB and the Armed Forces Office of the Bundeswehr, a part outsourced from the Federal Ministry of Defense .

In Berlin , after the Berlin / Bonn law had to set up an office here , the ministry moved into several floors in 1999 in the Haus der Elektroindustrie on Alexanderplatz . However  , a new building was planned at Stresemannstrasse 130, more towards the other ministries. Its planning and execution are from Geier Maass Pleuser Architects , and the topping-out ceremony was held on September 25, 2008. On June 6, 2011, the official move to the properties at Stresemannstrasse 128–130 in Berlin-Mitte and Köthener Strasse  2–3 ( Park Kolonnaden ) in Berlin-Kreuzberg . Some elements of the Berlin Wall have been permanently preserved in the vicinity of the modern building . However, these painted wall elements are not in their historical places. Since the building of today's BMU was the two-row border development, no graffiti could be seen on the wall elements, the elements were white. The neighboring building, which was previously used for administration, was renovated and incorporated into the BMU complex. In Berlin, some of the Ministry's premises are open to the public. After the federal election in 2013, the construction department of the Federal Ministry of Transport was incorporated into the Federal Ministry for the Environment. The employees in this department work in the Krausenstrasse 17-18 property in Berlin.

Due to the growing areas of responsibility and the associated larger number of employees, a supplementary building is planned, which will directly adjoin the listed building along Stresemannstrasse. To this end, the Federal Office for Building and Regional Planning (BBR) organized a planning competition in 2019, which was won by the companies JSWD Architekten with landscape architect Stephan Lentzen (Cologne and Bonn) and CF Møller Architects with CF Møller Landsacpe (Aarhus, Denmark). The new building will offer around 30,000 square meters of usable space, on which, in addition to offices, a canteen, a conference center and a media and information center for the ministry will be built. Other uses by other ministries and by the Berlin House of Representatives are conceivable. In January 2020, the designs will be publicly exhibited in the BBR, Straße des 17. Juni 112.

Free brochures are published on special events and topics, which are available on paper and on the Internet. For education, booklets, often in several languages, are published.

Environment ministries in the Federal Republic of Germany