Muro Lucano is a municipality in the province of Potenza in the southern Italian region of Basilicata with 5200 inhabitants (as of December 31, 2019). It is located on a rock at around 600  m slm above a gorge of the Rescio river in the Lucanian Apennines . 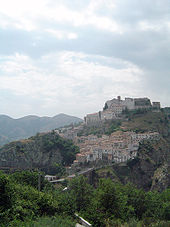 Muro Lucano from the east

Remains of the wall were found below the city and identified with Numistro , where 210 BC. A battle between the troops of Hannibal and Marcellus took place. This numistro is said to have been destroyed by the Saracens in 879 , causing the population to flee to the surrounding hamlets. In search of a safer place, she is said to have built a new settlement on the highest point in the area and provided it with a fortification wall. The new place was initially called Pianello , the location of the oldest houses on the fortification wall, ital. Sul muro as the name of a quarter is said to have gradually become the name for the center. Muro was a bishopric as early as the 11th century and was under the rule of various feudal lords in the following centuries. In 1382 the Queen of Naples, Johanna I , was killed in the castle on the orders of her adoptive son and successor Karl von Durazzo . In 1530 Muro became the fief of the Orsini di Gravina family, where it remained until 1830. Between 1571 and 1768 the city waged a legendary guerrilla war for pasture land for the sheep with its neighboring municipality Castelgrande . On April 24, 1863, the city was given the additional adjective Lucano to distinguish it from the Apulian town of Muro Leccese . Two earthquakes in 1694 and 1980 caused severe damage to the city.

The Muro Lucano dialect, known as Mures , differs greatly from the other Lucanian dialects; therefore theories see it in connection with the Oscar language .

Municipalities in the Province of Potenza in the Basilicata Region