Maratea is an Italian city with 4995 inhabitants (as of December 31, 2019) in the province of Potenza and the region of Basilicata .

The municipality of Maratea is a major tourist destination and the only town in the Basilicata region on the Tyrrhenian Sea , with about 32 km of coastline on the Gulf of Policastro . The coastline includes cliffs, sandbars, grottos, spacious beaches and lush vegetation of pines, olive trees, oaks, holm oaks , carob trees and a thicket of rosemary , myrtle and gorse (the so-called macchia mediterranea ).

The town stands on a slope of Monte San Biagio (Sankt-Belasiusberg), a mountain range of the Apennines .

The Basilica of San Blasio 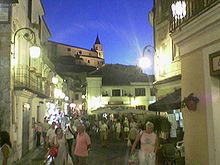 Because of its many churches and chapels, Maratea is called "the city of 44 churches".

There are other churches and chapels in the vicinity of Maratea.

The Christ of Maratea

The statue of Christ in Maratea was created in 1965 by the Florentine sculptor Bruno Innocenti from cement and white Carrara marble . It stands on the summit of Monte San Biagio in front of the facade of the Basilica San Basilio.

Several historic towers have been preserved on the Maratea coast, both old lighthouses and watchtowers from the time of the Kingdom of Naples , which were built to protect against pirates . They were built towards the end of the 16th century.

The Salerno – Reggio di Calabria railway has a train station in the city.

The closest airports are:

Municipalities in the Province of Potenza in the Basilicata Region