The title of this article is ambiguous. Further meanings are listed under Straßkirchen (disambiguation) . 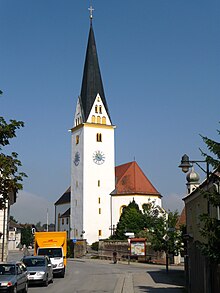 The parish church of St. Stephen

Straßkirchen is a municipality in the Lower Bavarian district of Straubing-Bogen and the seat of the Straßkirchen administrative community .

Straßkirchen is located in the Danube Forest region and in the Gäuboden . The Danube flows past Straßkirchen at a distance of about three kilometers.

Straßkirchen was first mentioned in a document in 1140. Straßkirchen belonged to the Straubing Rent Office and the Natternberg Regional Court of the Electorate of Bavaria . Court brands existed in Schambach, Paitzkofen and Stetten . In the course of the administrative reforms in Bavaria , today's municipality was created with the municipal edict of 1818 .

On April 1, 1949, Niederharthausen 's parts of the municipality Haberkofen, Niederast and Oedhof were incorporated, which went hand in hand with an increase in area from almost 471 hectares to 1610.13 hectares.

As part of the municipal reform in Bavaria, the previously independent municipalities of Irlbach , Paitzkofen (officially until 1870 Peitzkofen ) and Schambach and parts of the dissolved municipalities of Amselfing (Entau, Sophienhof) and Grafling (Gänsdorf, Seehof, Thal) were incorporated on May 1, 1978 . After a judgment by the Bavarian Constitutional Court in 1983, Irlbach became an independent municipality again, into which Entau and Sophienhof were also spun off.

In 2014 he was elected with 56.6% in the runoff election against the incumbent of the SPD and re-elected in 2020 against a candidate of the FW.

After the 2020 local elections, the local council has 16 members with the following distribution of seats:

Important architectural monuments in the community are the church and inn on the church square in the main town of Straßkirchen and Schambach Castle .

According to official statistics, there were 17 employees at the place of work in 1998 in the field of agriculture and forestry, 197 in the manufacturing sector and 105 in trade and transport. In other economic sectors 155 people were employed at the place of work subject to social security contributions. There were a total of 1083 employees at the place of residence subject to social insurance contributions. There were two companies in the manufacturing sector and eight in the construction sector. In addition, in 1999 there were 80 farms with an agriculturally used area of ​​2781 ha, of which 2725 ha were arable land and 56 ha were permanent green space.

Straßkirchen is right on the B 8 and also has a station from which daytime hour commuter trains of agilis both in the direction Straubing / Regensburg and after Plattling / Passau drive. The municipality spends over 200,000 euros each year on street lighting and road maintenance.

Municipalities in the district of Straubing-Bogen