University of Art in Berlin 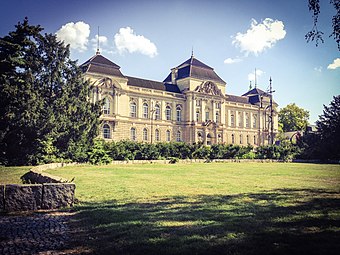 Main building of the UdK Berlin in Hardenbergstrasse

It is currently divided into four faculties - visual arts , design, music and performing arts - as well as a central institute for further education / UdK Berlin Career College. In addition, it operates two inter-university centers, the Jazz Institute Berlin (with the “Hanns Eisler” University of Music ) and the Inter-University Dance Center (with the “Ernst Busch” Academy of Dramatic Arts ).

The university is spread over around 15 locations, mainly in the Charlottenburg-Wilmersdorf district. The main building of the university is located at Hardenbergstrasse 33, near the Zoologischer Garten train station . There are also other buildings in Hardenbergstrasse. For example, there is the former Royal Institute for Church Music at 41 and a university building at number 9. Further university buildings and facilities are in Bundesallee 1–12 (former Joachimsthalsches Gymnasium ), at Einsteinufer 43–53 (former State Technical School for Optics and photo technology ), in Fasanenstraße 1b and 88, there you will find the Volkswagen University Library , in Grainauerstraße 12, in Grunewaldstraße 2-5, in Karlsruher Straße 7a, in Lietzenburger Straße 45, in Mierendorffstraße 30 and in Strasse des 17. Juni 118. The Uferstudios are located at Uferstrasse 23 in Berlin-Gesundbrunnen .

The following important information is missing from this article or section:
History ends in 1977.
Help Wikipedia by researching and pasting it .

University of Fine Arts on Hardenbergstrasse, around 1928

On September 30, 1975, the Berlin University of the Arts (HdK) was created by merging the State University of Fine Arts and the State University of Music and Performing Arts . On November 1, 2001, the HdK was awarded the title of University . This change of name did not represent a change of status, because the HdK was the only artistic educational institution in Berlin to have the right to award doctorates and was treated in budgetary terms like the other three universities. The reason for the renaming to Universität der Künste (UdK) Berlin was the efforts of the university management to describe the range of the offer with an internationally common name. In addition to the Bremen University of the Arts and the Folkwang University of the Arts in Essen, the UdK Berlin is one of those art colleges in Germany that unite fine arts and design on the one hand, music and performing arts on the other hand under one roof.

The history of the university up to 1975 is complex. The previous institutions on the visual arts and design side include the Electoral Academy of Mahler, Sculpture and Architectural Art (1696), the teaching establishment of the Berlin Museum of Applied Arts (1867), the Royal School of Art in Berlin (1869), and the School of Applied Arts and Crafts (1861) and the Master school of Visual Commercial (1892), on the part of music and Performing Arts, the Royal music Institute Berlin (1822), the Stern'sche Municipal Conservatory of music (1850), which led by Joseph Joachim founded Royal Academic College for Performing Music (1869, since 1918: State Academic College for Music ) and the Hebbel Theater School (founded in 1946, closed in 1951). The Acting course arose from the below 1951 by Hilde Körber founded the Max Reinhardt School of Drama , the 1964 integrated into the then University of Music and Performing Arts and in 1974 with the then College of Fine Arts for the University of the Arts (now University of the arts).

In the winter semester 1976/1977, there was at the Free University of Berlin to prohibitions strike , which spread immediately to all universities and technical colleges in the western part of the city. From December 6, 1976, numerous departments at the HdK also went on strike.

President since HdK Berlin was founded in 1975

Honorary senators of the UdK Berlin

Due to their services to the university, the following people were awarded the honorary senator of the UdK Berlin:

About 220 professorships teach at the UdK Berlin, of which about 20% are scientifically oriented. In all rankings related to equality , the UdK Berlin occupies a leading position in the Federal Republic: in some faculties the proportion of female professorships is over 50%, a total of almost 40%.

Apart from internationally famous artists such as Ai Weiwei , Aribert Reimann , Olafur Eliasson or Monica Bonvicini , the Artemis Quartet , Heinz Emigholz , Steven Sloane , Francois Benda , Hito Steyerl , Josephine Pryde and others - the fundamental claim of the UdK Berlin is the to appoint the most outstanding representatives of their subjects, although many names are not equally common in design or the performing arts.

Over 70 courses are offered at the UdK Berlin. As a result of the Bologna Process , the degrees to be acquired are largely the Bachelor of Arts and the Master of Arts. At the same time, the UdK Berlin has not introduced any tiered courses in any of the liberal arts. Teaching-related and advanced courses, for example doctoral courses, are also offered.

For years, a confirmation has been issued at the UdK Berlin on request, according to which the concert exam passed at the UdK Berlin and the master class in visual arts are equivalent to a doctorate. The faculty also trains not only artists, but also art teachers for different school levels. The Art in Context master’s course is also offered. With the exception of the latter, all courses begin with a two-semester basic apprenticeship, which forms the basis for the subsequent study in a specialist class.

At the UdK Berlin Career College , which was set up especially in 2007 , the further education courses of music therapy , cultural journalism , leadership in digital communication and sound studies and sonic arts can be studied. In addition, certificate courses such as curating, music therapy in a palliative context, artistic narration - storytelling in art and education and creating dance in art and education are offered.

Other facilities are affiliated with the university. The affiliated institute Institute of Electronic Business e. V. in Hardenbergstrasse 19.

As part of the project “Sustainable vitalization of the creative quarter on and around the Charlottenburg campus” (NAVI BC), the hybrid platform for networking science and art was launched in 2008 . Since 2011 this has been based at the UdK Berlin and the Technical University (TU). The office is located in the UdK location on Einsteinufer.

The Career & Transfer Service Center of the UdK Berlin is the first career center at an artistic university in the Federal Republic of Germany. It has been advising and informing students and graduates from all artistic disciplines about their perspectives on the art, culture and media market since 2001. Since 2004, the CTC has also been open to students at the three other artistic universities in Berlin.

KlangKunstBühne is the name of a summer academy for students after completing their studies and has taken place every two years for three weeks since 2003. It is offered by the Faculties of Music and Performing Arts in cooperation with the Central Institute for Continuing Education / UdK Berlin Career College. Also located at the UdK Berlin Career College is the Berlin Summer University of the Arts , which has been offering short workshops every year for international artists from all disciplines and advanced students since 2012.

The UdK publishes the journal - visual arts / design / music / stage / knowledge four times a year . With a few exceptions, attending the announced events such as B. musical lecture evenings, exhibitions and lectures free of charge.

Wikisource: The new academic universities for the fine arts and for music in Berlin-Charlottenburg (magazine article, approx. 1903)  - sources and full texts