The Academy of Fine Arts in Munich is one of the most important and, taking into account the educational institutions that preceded it, also one of the oldest art universities in Germany. 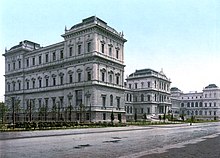 The prehistory of the academy goes back far into the 18th century, even before the 1770 by Elector Maximilian III. Joseph founded the so-called "drawing school", which already had the name "academy" in its name ("drawing school, respectively painter and sculptor academie"). This should be taken into account in the apparently late establishment in 1808 by King Maximilian I of Bavaria as the “Royal Academy of Fine Arts”. Its first director was Johann Peter von Langer , formerly head of the Düsseldorf Art Academy . The philosopher Friedrich Wilhelm Joseph Schelling became the first general secretary . Von Langer was followed by Peter von Cornelius in 1824 . In addition to the Academy, the Royal School of Applied Arts in Munich was founded in 1868 . In 1886 the academy moved into the prestigious new building on Akademiestraße / Leopoldstraße near the Siegestor . In addition to its role as a training center, the academy was soon also an artists' society. The landscape painters of the first generation (e.g. Max Joseph Wagenbauer , Joseph Wenglein , Johann Jakob Dorner the Younger , Simon Warnberger , Franz Xaver von Meixner ) were stylistically trend-setting for the development of the Munich school located in the vicinity of this academy , but are not so became known as their successors.

From 1852 to 1920 no women were admitted to study at the Academy of Fine Arts in Munich . Up-and-coming artists could only receive artistic training at expensive private schools or at the newly founded women's academy of the Munich Artists ' Association. It was not until the winter semester 1920/1921 that women were admitted to study under the same conditions as men.

In the middle of the 19th century, the Munich Academy had a leading reputation worldwide. It taught here z. B. the painters Franz von Defregger and Franz von Stuck as well as the sculptors Adolf von Hildebrand and Ludwig Schwanthaler . Franz von Lenbach was a student at the time . The academy experienced a heyday under Wilhelm von Kaulbach († 1874), his successor Karl Theodor von Piloty († 1886) and Nikolaus Gysis († 1901).

Between the wars and National Socialism

After the First World War, the academy quickly lost its importance, and the suppression of the Munich Soviet Republic left a repressive climate. In 1924 German Bestelmeyer took over the supervision of the arts and crafts school as government commissioner and intensified cooperation with the academy. After 1933 , the academy was an important place of activity for National Socialist cultural policy . Nazi artists like Adolf Ziegler and the sculptor Josef Thorak were appointed to the academy, while “ non-Aryan ” professors were dismissed. President Karl Caspar (since 1922), who had already been largely disempowered , was retired in 1937. Under the subsequent leadership of Bestelmeyer, so-called "decay art since 1910" was removed from the holdings of the Academy.

View of the academy from Akademiestrasse

Bestelmeyer died in 1942 and received a pompous state funeral. After his death, Bernhard Bleeker took over the management of the academy on a temporary basis. The academy building was largely destroyed in a bomb attack in July 1944, with extensive collections of works of art, plaster casts and costumes as well as the archive being lost. The art library that had been outsourced was largely preserved and, with around 90,000 volumes, is one of the best of its kind today. However, it is only intended for internal use.

In October 1945, former NSDAP members and artists from the Nazi era were dismissed by the military government, and Adolf Schinnerer took over the provisional management. In 1946 the Academy of Applied Arts was incorporated. After 1946 the academy was renewed with the appointment of Franz Xaver Fuhr and Toni Stadler (all two in 1946), Albert Fessler (1945), Charles Crodel (1952), Sep Ruf (1953) and Georg Meistermann (1964). In 1953 the academy was given its current name. In the post-war years, however, the Munich Academy found it difficult to break away from its National Socialist character and to join international modernism. The most controversial example of a neglected denazification was Hermann Kaspar , who was one of the cultural celebrities of the Third Reich and who again worked as a professor of painting from 1956 to 1972.

In the 1950s, the artist group SPUR was formed at the academy . On June 26, 1967, the "University Group of Socialist Art Students (HSK)" was constituted at the academy. In 1968 several pieces by the anti-theater around Rainer Werner Fassbinder were performed in the academy , the student representatives (AStA) showed the documentation on the "Hermann Kaspar case". The Academy was closed on February 22nd, 1969 by the Minister of Education and Cultural Affairs Ludwig Huber , an administrative court ruling overturned this closure. In 1978, the appointment of Franz Bernhard Weißhaar by the ministry again led to heated arguments. In 1989 the AkademieGalerie was built on the mezzanine floor of the Universität subway station . In 2005, the modern extension building was inaugurated at Akademiestrasse 2.

The extension of the academy

The older building of the academy was designed by Gottfried von Neureuther and built between 1876 and 1885 as a pompous three-wing complex of a palatial Wilhelminian style building in the neo-renaissance style. Neureuther consistently used pilaster templates on the facades of the academy to further structure the wall surfaces. The outside staircase with bronze equestrian figures of Castor and Pollux comes from Max von Widnmann , the rear auditorium extension was added in 1911/12 by Friedrich von Thiersch . After being destroyed in the war, the academy was repaired by Sep Ruf in the 1950s . With the general renovation of the historic old building, the listed garden was also prepared and a residential and studio building was built there.

On October 26, 2005, the modern extension by the architects Coop Himmelb (l) au was opened in the style of deconstructivism . In the new building there are plastic workshops, sculpture studios, photo workshops, screen printing and multimedia workshops as well as parts of the administration. Thanks to the "Foundation of the Munich Art Academy" established by Ben Willikens , the realization of the new building and the restoration of the old building were made possible.

In addition to the academy's classic range of painting and sculpture courses, the Academy's range of courses was expanded considerably after the Second World War. The arts and crafts school and training for teaching at grammar schools were incorporated.

There are therefore the undergraduate courses

There is a cross-course and cross-class offer

as well as the cx center for interdisciplinary studies and various project classes .

The students exhibit for the public in the academy building during the annual exhibition. In the AkademieGalerie in the Universität U-Bahn station , students and graduates of the academy exhibit their works. The exhibition room, which is around 8 meters deep and 20 meters long, is separated from the rest of the mezzanine floor by a glass wall and can be seen from there over its full length. Other regular exhibitions take place in the cube in Petuelpark .

The debut award is a grant from the Bavarian State Ministry for Research, Science and Art.

Many important artists have taught or studied in Munich. You can find an overview in the list of members of the Academy of Fine Arts Munich .