Map of the planned city expansion (from 1935)

City expansion to the west of Amsterdam began between 1875 and 1900. These included the former districts Spaarndammerbuurt , Staatsliedenbuurt , Kinkerbuurt , Frederik Hendrikbuurt and part of the Zeeheldenbuurt . In the years from 1920 to 1940, the city expanded into the area of ​​the formerly independent municipality of Sloten with the districts Admiralenbuurt , Hoofddorppleinbuurt as well as the Mercatorplein and the Surinameplein . These districts have belonged to De Baarsjes since 1990 . At the beginning of the 1950s Amsterdam Nieuw-West was built, known as the "Western Garden Cities " ("Westelijke tuinsteden") with the districts of Slotermeer , Geuzenveld , Slotervaart , Overtoomse Veld and Osdorp .

The quarter lies between the Bilderdijkkade , Kinkerstraat and Tweede Kostverlorenkade and was part of the first urban expansion outside of the Amsterdam Canal Belt ( Grachtengordel ) in the second half of the 19th century. Here lies the Ten Kate market and the shopping street Kinkerstraat . The district is characterized by its many narrow streets. There is a " petting zoo " for children (in Dutch Kinderboerderij ) at the room clean . Bellamy Noord has 2,800 inhabitants and Bellamy Zuid has 3,590.

A typical Amsterdam residential area that has been renovated in recent years. The Borgerbuurt has many social facilities for the residents and is considered a neighborhood with an average low income. In 2017, 2,855 people lived here.

The district is located between Baarsjesweg , Postjesweg , Admiralengracht , Jan Evertsenstraat and Admiraal de Ruijterweg . The Chasseebuurt has 6,205 inhabitants, around 50% of whom are foreign citizens with many companies that are concentrated in a shopping street. Restaurants are hardly to be found, with the exception of a few snack bars and cafes. In the future, the community wants to improve the economic and social conditions in the district. The provisionally estimated costs for this are given at 122 million euros . Unemployment is high compared to other residential areas. Most of the Chassebuurt was built between 1900 and 1940 and is the oldest district in De Baarsjes .

The Cremerbuurt has many yuppie residents and is close to the Vondelpark . The annual “ Sinterklaasfeest ” on the Cremerplein and the “Wilhelmina Huiskamerfestival” were a great success. There are 2,270 inhabitants in Cremerbuurt Oost and 5,675 in Cremerbuurt West.

The Da Costabuurt (named after Isaäc da Costa (1798-1860)), like the Bellamy and Borgerbuurt, is a typical Amsterdam residential area. The Da Costaplein is a central square in the district with numerous resident activities ("Da Costa & Co"), a large number of foreign citizens and many small houses. The quarter has 4,735 inhabitants.

This quarter is called “Does-, Tromp- and Geuzenbuurt” for short, three roads run through the three smaller neighborhoods with around 6,935 inhabitants, of which in the Pieter van Doesbuurt 1,965 and in the Trompbuurt 3,285. There are three primary schools, a playground, old people's home and the Jerusalemkerk. 61% are foreign citizens. The Geuzenbuurt is mainly a residential area with few businesses. The Trompbuurt was named after the seafarer Maarten Harpertszoon Tromp . The district used to be in the municipality of Sloten and belonged to the municipality of Amsterdam from 1921 and to Amsterdam West since the beginning of 2010.

The Erasmusparkbuurt is characterized as a quiet, child-friendly and "green" area and is regarded as the "affluent area" in Bos en Lommer with many homeowners. 1,995 people live in Ersamusparkbuurt Oost and 3,995 in West.

This residential area is known as "Frederik Hendrikbuurt", "Hugo de Grootbuurt" and "Marcantieeinland" because it consists of three small neighborhoods that are equipped with lots of green spaces. A village culture with an urban character. This is where Fredrik Hendrik Plantsoen is located , called by the residents "the green heart" of the district. The Frederik Hendrikbuurt was built in the first half of the 17th century. The Hugo de Grootbuurt , with the Hugo de Grootplein (named after the early baroque philosopher, theologian, and constitutional and international law scholar Hugo de Groot ) as the center with many shops and bars, impresses with the architecture of the 19th century. The neighborhood has 8,410 inhabitants.

The southern border of the Gibraltarbuurt is formed by the Bos en Lommerweg and the Admiraal Ruijterweg , the eastern part borders on the Westerpark . The "Volkstuinen VVS Sloterdijkmeer" and Nut en Genoegen as well as the Nieuwpoortkade , Den Brielstraat and Adolf van Nassaustraat, which are a bit out of the way, belong to the quarter. The neighborhood is called a “real residential area” although there is a small industrial area there. The former village of Oud Sloterdijk and the Petruskirche bear witness to the historical character of the district.

There is a weekly market , the Bader mosque , two primary schools, a kindergarten and a children's playground, and many old, unrenovated houses.

Located near the Leidseplein , with the Vondelpark , which serves as the "back garden" ( eight- quarter), the quarter was named after the Dutch poet Jan Frederik Helmers . Due to the influx of new residents in recent years, street parties are regularly organized in this area in summer. 7,465 people live in the quarter.

The Houthaven is a port on the IJ and is also known as a residential area and consists of the Oude Houthaven , the Nieuwe Houthaven ("old and new Houthaven") and the Houthaven . It is located in the western port area of Westpoort and is mainly used for inland shipping .

In 1876 the port was laid out together with the Noordzeekanaal . On the eastern border of the Houthaven are two large luxury apartment buildings, seven artificially created islands are planned on which a residential and industrial area with 1,700 apartments and 52,000 m² of business premises is to be built.

The January Maijenbuurt is in the neighborhood District De Baarsjes and is surrounded by the January Evertsenstraat , Jan van Galenstraat and Admiralengracht . The many coffee shops and drug addicts cause problems in the “Buurt”.

The Kolenkitbuurt was built shortly after the end of the war (1945) and has its name after the Opstandingskerk , today a Rijksmonument . 80% of the 6,020 inhabitants are foreign citizens. The quarter has 11.5% unemployment and is in the list of “20 problem areas” in the Netherlands.

Between Bos en Lommerweg , Haarlemmerweg , Westelijk Marktkanaal , Jan van Galenstraat and Admiraal de Ruijterweg lies the Landlustbuurt , which in turn belongs to the Bos en Lommer district, with two community houses ( Buurthuis ) on Karel Doorman-Plein , a children's playground, a primary school and a youth center . Built in the 1930s, the district is one of the oldest in Amsterdam West and based on the urban "expansion plan " ( Algemeen Uitbreidungsplan , AUP) from 1935. The name comes from a former farm on the Haarlemmerweg. 55% of the quarter consists of foreign residents, the number of residents was 18,640 (as of January 1, 2017) with a relatively high level of unemployment.

The Mercatorplein was designed by the architect Hendrik Petrus Berlage . The square got its name after the cartographer Gerardus Mercator and was modernized in 2009, including more green areas.

This quarter borders partly on the Rembrandtpark . This is where the Suriname Square is located, where annually on June 30th and July 1st a commemoration of the abolition of slavery takes place. The Postjesbuurt is a typical quiet residential area and is surrounded by the Postjeskade , the Hoofdweg and the Surinameplein . 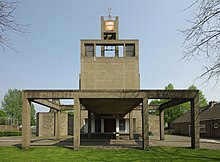 Around 1920 until after the Second World War , the Robert Scottbuurt was built in parts. The Jan van Galen sports park , the Sint-Josephkerk and the Bos en Lommerplantsoen are located here . Lots of senior citizens populate the neighborhood and new apartments are planned for the near future. "Wedged" between the busy streets Hoofdweg and Jan van Galenstraat , the area is difficult to reach by car, especially since there are few parking spaces. The name comes from the explorer Robert Facon Scott and has the character of a village with many trees and shrubs. Most of the houses were built in the 1950s. In the west lies the Erasmuspark . The Erasmusgracht is the dividing line between the old and the new residential area.

Named after the Spaarndammerdijk and the Spaarndammerstraat , the area was part of the Westerpark between 1990 and 2010 , along with the Staatsliedenbuurt , Zeehelderbuurt and the Frederik Hendrikbuurt . The quarter was laid out at the end of the 19th century and was primarily used as a residential area for dock workers. In the 1910s and 1920s, workers' apartments were built there in the style of the Amsterdam School , which are among the highlights of this style. The Het Schip building in particular was designed with great care. 2,750 residents live in Noordoost of the Spaarndammerbuurt, 1,020 in Zuidoost, 1,735 in Zuidwest, 1,155 in Midden and 2,010 in Noordwest.

In the 1980s the Staatsliedenbuurt was known as the stronghold of the Amsterdam squatter movement . Today the quarter is characterized by social housing and its multicultural character. This quarter was built at the same time as the Spaarndammerbuurt and in the mid-1980s new apartments and older houses were renovated. With residents from more than 90 different cultures, the Staatsliedenbuurt is known for cultural initiatives that, among other things, come from the artists who live there.

The Zeehelderbuurt borders on the Westelijke Eilanden . The first development dates from the 17th century from small industrial establishments: shipyards, Reepschlägerij (Dutch Touwslagerij ), tanneries (Dutch Leerlooien ). Many streets were named after sea heroes and explorers, including Willem Barents , Antonio van Diemen , Jacob van Heemskerk , Jacob Le Maire , Jakob Roggeveen and many others. In 2017, 2,085 inhabitants lived in the district.

For more residential areas in the Amsterdam West district see the articles:

The Slotervaartziekenhuis (Slotervaartkrankenhaus) was merged from four hospitals at the end of the 1960s and was considered the most modern hospital in Europe when it opened. The Vredeskerk ( Church of Peace ) is on the edge of the De Pijp district . The parish "Onze Lieve Vrouw Konigin van de Vrede" (literally: Our Lady Queen of Peace ) was founded on December 8th, 1918, the inauguration took place on August 7th, 1924. Before the church was built, there was a small parish here called De stal van Bethlehem ( The Bethlehem Stables ). The January Evertsenstraat is a road which in 1925 was named after the Dutch navigator January Evertsen (from 1600 to 1666) and was the first covered shopping street in the Netherlands .

It runs through the districts of De Baarsjes and Slotervaart. The architecture is shaped by the Amsterdam School ( Amsterdamer School ). In 1956 the street was extended from Orteliuskade to Sloterplas. The number 7 and 13 trams have been running between Admiraal de Ruiterweg / Witte de Withstraat and Marcatorplein since 1927. The theater in de Nes has a long history dating back to the 16th century . Around 1585 were the "Rederijkerskamer" ( Chamber of rhetoric is historically in the Dutch language for "rhetorician" and "Meistersinger") with the name " 't Wit Lavendel" some ideas listed. One of the members was Joost van den Vondel . The Ten Katemarkt in Ten Katestraat in the residential district of Oud-West is a multicultural market with several thousand offers.