The north of Amsterdam was in the 14th century a small peninsula ( Dutch Schiereiland ) with the name "Volewijk". Amsterdam got the right of disposal over the peninsula in 1393. The inhabitants of Volewijk lived mainly from fishing . Amsterdam was expanded for the first time in 1482, then in 1583, 1593 and 1612. In the course of time, the inhabitants did not limit themselves to fishing, they became merchants who traded in their goods. After the completion of the North Sea Canal in 1876, Amsterdam urgently needed industrial land and in the 20th century Amsterdam Noord expanded into an important industrial area. The current size of the city district originated in 1921 when the former municipalities Buiksloot , Nieuwendam and Ransdorp were assigned to the district. Today Amsterdam Noord is not only known as an industrial area, but also for its “garden villages” ( Tuindorp in Dutch ). These are Tuindorp Nieuwendam, Tuindorp Buiksloot and Tuindorp Oostzaan . The Amsterdam Public Library has three branches in Noord. A Museum de Noord is located in the former "Gemeinde Badhaus" (Dutch community Badhuis ). With the Cafe du Nord , the museum offers visitors a place to relax and get to know each other.

Since the 1960s, the shipping industry in north Amsterdam has largely declined and the Vogelbuurt residential area emerged in the 1980s . The north of the city is divided by the IJ and until 1957 was only connected to the center by ferry boats . The first bridge to connect with the city, Schelling Wouderbrug , was built in 1957. The Coentunnel was added in 1966, the IJtunnel in 1968 and the Zeeburgertunnel in 1990 .

Waterland : (literally: " Waterland ") in the north of Amsterdam is an area with low-lying moorland, crossed by many ditches (Varten) and small canals (Sloten).

There is an ecological zone (Dutch Ecological Zone Schellingwoude ) which connects Waterland with the IJmeer . A nature area with many grass snakes, voles, herons, kingfishers and hundreds

of orchids. The Waterland Zeedijk had protected the area against the IJ and the Zuiderzee for centuries . In 1625, 1687, 1825 and 1916 dikes were breached. The danger of flooding was averted with the construction of the barrier dike ( Afsluitdijk ) in 1932.

Landelijk Noord (as much as: rural area in the north ) is located in Waterland Oost with the villages Schellinwoude, Durgerdam, Holydorp, Ransdorp and Zunderdorp. In 1987 the area was placed under the administrative area of ​​Amsterdam Noord.

Banne Nord und Süd is a residential area from the 1970s with a population of: Banne Zuidwest 3,750, in Zuidoost 3,585, in Noordwest 2,640 and in Noordoost 3,670. With lots of green space and the De Rietwijker theater , six schools, a children's playground and a health service on Parlevinkerplein . Banne Zuid : divided into Banne Zuid and Banne Noord (since 1990). The neighborhood has existed since the 1970s. The shopping center de Ankerplaats , a " petting zoo " (Dutch Kinderboerderij ) for children, the Buiksloterkerk (Buiksloterkirche), two schools, two old people's homes and a hospital are located here. The "Banne bruist" event takes place annually with around 25,000 visitors.

The Bloemenbuurt (German flower district ), built in the style of the Amsterdam School in the mid-1920s, is also called Floradorp . It is one of the oldest districts in Noord and has 2,475 inhabitants in Bloemenbuurt Zuid and 2,385 inhabitants in Noord . In 1920 600 apartments were planned, in 1927 183 and in 1929 the last apartments were completed. Strikes and conflicts often broke out during the construction work. In 1955 the district was renovated. The Bloemenbuurt is limited by the Florapark and the Noorderpark .

For other residential areas in Amsterdam Noord see: → Buiksloot and Buikslotermeer

The Asterdorp settlement, which no longer exists today, served as accommodation for “ asocial ” families from 1927 onwards . From 1942 it was used by German occupiers to accommodate Jewish people before they were transported to the Westerbork transit camp .

Built between 1995 and 1998, it is a large, almost square "island". The layout of the streets, a tight, geometric street model is remarkable. The name Jeugdland is also used in Amsterdam-Oost for the children's playground Jeugdland Oost . In Jeugdland Noord there is a petting zoo ( Kinderboerderij in Dutch ) for children. Jeugdland lies between the neighborhoods of Kadoelen and Nieuwendam Noord . There is a villa area and sports fields.

Markengouw was created in the 1950s. In addition to outdated housing, there are villas in the Beemsterstaart and a trailer park on the other side . The Baanakkerspark and a gardening association ( De Swaenen ) are located here. In the nursery, residents of the residential area can plant their own vegetables. Number of inhabitants: 5605.

There are three neighborhood quarters named Molenwijk , Kermisbuurt and Walvisbuurt . In the 1960s a shopping center, De Molenwijk , and a library were built.

Tuindorp Nieuwendam , created in 1930 and belongs to “Oud – Noord”. Number of inhabitants in Tuindorp Nieuwendam West 1067 and in Oost 2358. The name comes from the garden village of the same name Tuindorp . These districts have a typical village character with lots of green spaces.

Built in the 1920s with many single family homes. In the center is the Zonneplein (German sun place ), a meeting point for many residents. The district borders the municipalities of Oostzaan and Zaanstad . Construction of the first 1,000 apartments began there in 1919, and in 1924 the quarter was completed with 1,324 workers' apartments. The quarter has 11,345 inhabitants (as of January 1, 2017).

With the newly built district of Twiske West (2,460 inhabitants) and Twiske Oost (1,130 inhabitants), the district used to belong to Landsmeer .

Created in the 1990s, it is a quiet area with little traffic.

Originated in the north on the IJ in the 1920s and today there is a library and hotels there.

Durgerdam also belonged to the then municipality of Ransdorp between 1818 and 1921. A flood in 1421 ensured that the residents were able to build a new dam in 1422, the "Waterlandse Zeedijk". Durgerdam was created in the bend of the dam. The original name was Ydoornickerdam , a reference to the flooding in the ( "Sint Elisabethsvloed") ruined place IJDoorn . Between 1400 and 1700 the village had different names: Yoort, Yoortdam, Doornickerdam, Major k erdam and major g erdam. In 1840 Durgerdam had 518 inhabitants, today 420 (as of January 1, 2017).

Between 1818 and 1921 the village belonged to the municipality of Ransdorp. The name means something like "low-lying area on a (road) ditch" (Dutch laagleger area aan een sloot ). There is only one road to get to Holysloot by car. In summer, a ferry brings pedestrians and cyclists to the area. The first official mention comes from the 13th century when Count Floris V granted some privileges to "the van Ransdorp en Hoolesloot". Holysloot has 260 inhabitants.

Created in 1516 after the Waterlandse Zeedijk dam broke. Emperor Charles V decided that a new dam had to be built and the towns of Buiksloot, Kadoelen, Nieuwendam, Schellingwoude and Durgerdam were created. Tuindorp Nieuwendam Noord , which was built between 1924 and 1927, belongs to the village . Before World War II , Tuindorp was the most prestigious working-class neighborhood in Europe. The houses had their own small bathrooms and a garden. The bathrooms were considered "revolutionary at that time". Nieuwendam had 13,265 inhabitants in 2017. The village lies in a line with Buiksloot, Kadoelen, Durgerdam and Schellingwoude. Many wooden houses from the 17th and 18th centuries have been preserved as in the other villages. Buiksloot and Buikslottermeer also belong to Nieuwendam. The smallest church in Amsterdam, built around 1840, is in the village. A 27 hectare forest (Bos) named Viegenbos is assigned to Nieuwendam and was named after the socialist alderman WH Viegen, who had the forest laid out in 1911. Until the construction of the IJtunnel in 1968, Nieuwendam could be reached by ferry alone. Nieuwendam Noordwest : was created in the 1960s and 1970s with a park that is used by residents from all over Amsterdam Noord. The district is bordered by the IJdoornlaan , the Noordhollandsch Kanaal , the A10 ring road and the Baanakkerspark . 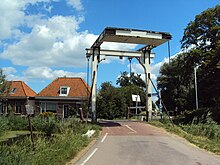 In the Middle Ages , Ransdorp was regarded as the most important village of six localities in Waterland , these were Zunderdorp, Schellingwoude, Zuiderwoude, Broek, Landsmeer and Ransdorf. Burgerdam and Holysloot were still too insignificant to be viewed as independent villages. Ransdorp is "in the heart" of Landelijk Noord or Waterland Oost . Earlier names in the history of the village were Raarop, Raardorp and Randdorp. Since agriculture was not possible, the inhabitants lived from trade and shipping. In 1619 the six villages allied to form the "Unie van Waterland" to defend their rights and freedoms. The 32 meter high tower in Ransdop, "De Ransdorper Toren", built between 1502 and 1542, is a prominent point in Landelijk Noord . In the last years of the 19th century it was partly set up as a prison. In 1900 the prison was closed. The tower can be visited from the beginning of April to the end of September. After the great flooding in 1916, the villages were unable to help themselves with their own financial means. For this reason, Ransdorp joined the municipality of Amsterdam in 1921. In 1811 the village had 220 inhabitants, today 295.

The village lies between Durgerdam and Nieuwendam. The Oranjesluizen lock has been located in the south of the village since 1870 and separates the IJsselmeer (formerly: Zuiderzee ) from the inland IJ, the North Sea Canal and the Amsterdam-Rhine Canal . In 1840 Schellingwoude had 133 inhabitants. Schellingwoude was known for a long time as the "Scheepsbouwcentrum" (German center for shipbuilding ). Until 1857 the village was an independent municipality. During the Second World War, German distress pilots lay here for some time . In 1957 the Schellingwouderbrug (German Schellingwouderbrücke ) was completed and was the first land connection over the IJ between Amsterdam north and east. In 1990 the Zeeburger tunnel was put into use. Since 2011 there has been a walking route ( called Ecowijk ) for recreation (Dutch Recreatie ) and leisure opportunities between Schellingwoude and the village of Durgerdam, which was created with a subsidy of 150,000 euros from the province of North Holland . The footpath leads through pastureland, reed land and open rural areas. Schellingwoude has a marina.

The village is located in the north rural area of ​​the municipality of Amsterdam. Until 1921 the place belonged to the municipality of Nieuwendam . Every three years a Boerenmarkt (German farmer's market ) takes place in Zunderdorp , which is organized by around 150 volunteers. Zunderdorp has 10 Rijksmonumente (information from the Rijksdienst voor het Cultureel Erfgoed ) selection: