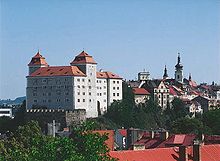 View of the old town and the castle

Church of the Assumption of Mary

Entrance 7 to the Škoda plant

The place was founded in the second half of the 10th century by Boleslav II as a royal castle. The town castle on a ledge at the mouth of the Klenice and Jizera comes from this time.

In 1255 a monastery of the Order of St. John was founded in the village . The town charter Mladá Boleslav received partly in 1334 and partly in the 1436th

In the spring of 1279, Margrave Otto V, head of the Ottonian line of Brandenburg, since the death of King Ottokar II of Bohemia, he was appointed guardian of Crown Prince Wenceslaus, his nephew and imperial administrator of Bohemia, the seven-year-old heir to the throne and his mother, Queen widow Kunigunde Jungbunzlau, where both were held under harsh conditions at the local castle. The queen managed to escape soon afterwards and she made serious accusations against the margrave and his servants.

In the 16th century the town became the center of the Bohemian Brethren , who followed Jan Hus's ideas . A diocese was established and a cathedral built in the Renaissance style. The religious wars of the 17th century brought a decrease in the population and recatholization .

Industrialization began in Mladá Boleslav in the 19th century . The company Laurin & Klement was founded in 1895 , originally as a bicycle manufacturer. After successful development and diversification of production in the direction of automotive engineering, this company was sold to the heavy industry group Škoda based in Pilsen in 1925 . The automobile branch was spun off as a state company after the Second World War . This company was privatized in 1990 and has since been part of the Volkswagen Group as Škoda Auto . The plant occupies a large part of the area of ​​the city.

In the 1920s, several buildings of Czech modernism were built in Mladá Boleslav . Emil Králík (1880–1946) built the city theater, Jiří Kroha (1893–1974) built the Gellner department store and the district polyclinic.

The headquarters and the largest factory of the automobile manufacturer Škoda Auto are located in Mladá Boleslav . The company employs 23,976 people in the Czech Republic (as of 2006), most of them in the Mladá Boleslav plant. This means that more than three quarters of all those in work in the city are employed by the subsidiary of Volkswagen AG . Škoda Auto is also the most important automobile manufacturer in the Czech Republic and the country's largest exporter.

Born in the place