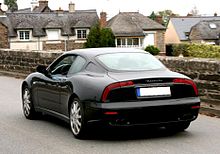 Giorgio Giugiaro or Giorgetto Giugiaro (born August 7, 1938 in Garessio ) is an Italian industrial designer . His most important creations include the style-defining design classics Lotus Esprit , Fiat Panda , Fiat Uno , Fiat Punto , Lancia Delta , VW Golf I and Audi 80 as well as the Nikon F4 in the camera area .

Giugiaro comes from an artistic family and therefore strived for an artistic future from an early age. His grandfather Luigi created church paintings , and his father, Mario Giugiaro , was first active in decorative-religious art, but then switched to oil painting.

During his stay in Turin he switched from studying art at evening classes for technical design and developed a passion for sketching of automobiles . In June 1955, Giugiaro showed some of his designs at the year-end exhibition of his technical drawing course.

Dante Giacosa , technical director at Fiat , discovered the young talent there and recruited Giugiaro. Giugiaro joined Fiat in September 1955 under the leadership of Fabio Luigi Rapi , in the department of design studies of special vehicles. As early as December 1959, he became head of the “ Bertone Styling Center”. Giuseppe Bertone supported the young designer intensively with advice and action and was not disappointed. The years that Giugiaro spent with him were formative for his education and allowed him to secure a place in the Turin designer scene.

In November 1965 he moved to the management of the competitor Carrozzeria Ghia , where he was responsible for the styling center and the prototype department. The Maserati Ghibli and the De Tomaso Mangusta , both of which were presented at the Turin Motor Show, date from this period. For Ghia he developed a. a. the design studies Fiat 850 Vanessa (1960) and Oldsmobile Toronado Thor (1967) as well as the production models Isuzu 117 Coupé (1966) and Iso Fidia (1967). Although his time at the company was extremely successful, he increasingly had a desire for independence.

On February 7, 1967, he founded his own design studio, Ital Styling . There he initially continued his work for Ghia on a freelance basis, but prepared himself for a previously unexplored area. Giugiaro wanted to invest his professional and financial capital in a global challenge, a professional service company for the automotive industry. Together with the engineer Aldo Mantovani, who had been Fiat's production manager for 20 years, he founded the company SIRP (Studi Italiani Realizzazione Prototipi SpA) in February 1968, which was renamed Italdesign that same year . After he took over Aldo Mantovani's shares in 1999, the company name was Italdesign Giugiaro . The company designed more than 200 vehicles, many of which went into series production . At Italdesign he still works today under the direction of his son Fabrizio Giugiaro . In 2010 the family sold 90 percent of the company's shares to the Volkswagen Group, and in June 2015 Audi took over the remaining 10 percent. In the same year, Giorgio and Fabrizio Giugiaro founded the GFG Progetti design studio in Turin , which mainly develops design concepts for electric vehicles on behalf of Chinese companies.