Niko Kovač pronunciation ? / i [ ˈniːkɔ ˈkɔʋaːtʃ ] (born October 15, 1971 in West Berlin ) is a former German-Croatian soccer player and today's coach . As a player, he was active in his hometown at Hertha BSC , Bayer 04 Leverkusen , Hamburger SV and FC Bayern Munich . He played in 83 international matches for the Croatian national team . After three years in Austria with FC Red Bull Salzburg , he ended his career as a player in 2009 and began his coaching career.

From October 2013 to September 2015 he was the coach of the Croatian national team. From March 2016 he was coach of the Bundesliga club Eintracht Frankfurt , with whom he won the DFB Cup in May 2018 . From July 2018 to November 3, 2019, Kovač was the head coach of FC Bayern Munich, with whom he won the championship and DFB Cup double and the DFL Supercup in his first season . He is also the only German coach with dual nationality who was able to win the championship as a player and as a coach. Kovač has been the head coach of AS Monaco since July 2020 .

Niko Kovač's Croatian parents had emigrated from Livno in the SR Bosnia-Herzegovina , part of the SFR Yugoslavia , and settled in Berlin-Wedding on Turiner Strasse. Niko and his two siblings (a brother and a sister) were born there at the nearby football field, Ruheplatzstraße, of whom his brother Robert is also a former soccer player and current coach. Kovač first attended the Wedding elementary school on Antonstrasse. He then passed his Abitur at Lessing-Gymnasium with an average of 2.9 and then studied business administration for eight semesters. Niko Kovač has both Croatian and German citizenship . The children were raised in a Christian way by their parents ; Even today, according to his own admission , the Bible is a valuable source for Niko Kovač. He is a practicing Catholic .

Niko Kovač started playing football at Rapide Wedding . In 1989 he moved to Hertha Zehlendorf , where Kovač made his debut in the men's division in 1990/91 in third place in the Berlin season of the third-class amateur league . In the summer of 1991 he went to the second division Hertha BSC , where he developed into a regular and leading player until 1996 , but never made it to the Bundesliga. He made his professional debut on November 2, 1991 (16th matchday) in a 1-1 draw at home against VfL Osnabrück , when he came on for Armin Görtz in the 77th minute . He scored his first goal the following season on December 12, 1992 (25th match day) in a 3-0 home win over Hannover 96 . He was also used six times in the DFB Cup .

After three more seasons for Hertha BSC, Kovač moved to Austria in 2006 for FC Red Bull Salzburg , where he became the Austrian champions as team captain at the end of his first season in 2007 . After the end of the 2008/09 season , in which he was again champion, he ended his career as an active footballer on May 31, 2009.

Kovač made his debut in 1996 in the Croatian national team , for which he appeared 83 times and scored 14 goals until he retired as a national player in January 2009. He participated in the World Championships in 2002 and 2006 and in the European Championships in 2004 and 2008 . In each of the three group games of these tournaments, he also scored two goals: On June 21, 2004 in the 2: 4 defeat in the last group game against England and on June 22, 2006 in the 2: 2 in the last group game against Australia .

Career as a coach 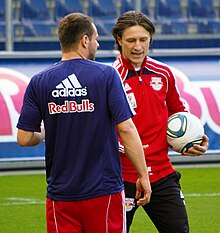 From the summer break of 2009 to June 2011, Kovač coached the second team of Red Bull Salzburg ("Juniors") as the successor to Adi Hütter . After the head coach of the 1st team Huub Stevens was on leave in April 2011 , Kovač took over the training of the 1st team as an assistant coach alongside the newly signed Ricardo Moniz . At the end of June 2012, Kovač was released after Ricardo Moniz resigned and the new head coach Roger Schmidt had planned without Kovač.

In January 2013, Kovač became the coach of the Croatian U-21 national team . His brother Robert assisted him as an assistant coach.

On October 16, 2013, Kovač was appointed as the successor to Igor Štimac as coach of the Croatian men's national team after they had lost the last two games and thus missed the direct qualification for the 2014 World Cup . Under the leadership of Kovač, the Croatian team prevailed in the play-offs against Iceland and thus managed to qualify for the World Cup. At the tournament in Brazil, the Croatians did not get beyond the preliminary round.

The qualification for the Euro 2016 went first very successful for Kovač. For example, you could beat Azerbaijan 6-0 at home or Norway 5-1; but in the course of that qualification his team only played 0-0 in Azerbaijan and lost 0-2 in Norway. The Croatian Association then released Kovač on September 9, 2015.

From March 8, 2016, Kovač was the successor to Armin Veh as head coach of the German Bundesliga club Eintracht Frankfurt . He signed a contract with a term until 2019. a. agreed that Kovač could leave the club for a fixed transfer fee for offers from top European clubs.

He took over the team in 16th place in the table, which they also held at the end of the season. Thus, the team had to play two relegation games against the second division third 1. FC Nürnberg . With a 1-1 home game and a 1-0 win in Nuremberg, the league was retained. At the winter break of 2016/17 he was 4th with Eintracht and 11th place in the table at the end of the season. He also led Frankfurt into the DFB Cup final , in which they were defeated by Borussia Dortmund with a 1: 2.

For the 2018/19 season , Kovač took over the Bundesliga team of FC Bayern Munich from Jupp Heynckes . He received a contract that runs until June 30, 2021. He won the 2018 DFL Supercup with Bayern and finished the first half of the season with 36 points in second place in the table. In the Champions League they were eliminated in the round of 16 against Liverpool , so Bayern left this competition as early as 2011. In the DFB Cup, on the other hand, Kovač and his team made it to the final, for him personally this meant the third participation in the final in a row.

In the Bundesliga, Bayern caught up nine points behind Borussia Dortmund in the second half of the season and won the championship with a 5-1 win against Eintracht Frankfurt on matchday 34. For Kovač this is the first championship title as a coach. Besides Franz Beckenbauer and Hansi Flick, he is the only one who has won German championships with FC Bayern both as a player and as a coach.

A week after winning the championship, he won the final of the DFB Cup with FC Bayern Munich in Berlin's Olympic Stadium with a 3-0 win against RB Leipzig . Together with Hansi Flick, he is the only one who was able to win the double both as a player and as a coach with one team.

On November 3, 2019, FC Bayern parted ways with Kovač and his brother and assistant coach Robert after a 5-1 defeat at Eintracht Frankfurt . At this point the team was in fourth place in the Bundesliga with 18 points after 10 matchdays.

For the 2020/21 season , Kovač took over AS Monaco together with brother Robert , with which they signed a contract until June 30, 2023. In addition to Thomas Tuchel from Paris Saint-Germain , he is the second German head coach in the French Ligue 1 .

In 2016, Kovač received the Fair Play Prize of German Sports from the German Olympic Sports Confederation for his behavior towards the defeated Nürnbergers after they lost their relegation games against Frankfurt. “The honest empathy for the sporty opponent, especially in the face of one's own, important victory, is an example of fair behavior in sport,” judged the jury of the award.