With around 170 film roles in more than 30 countries, numerous appearances on stage , for television and radio and as a voice actor, Kolldehoff was one of the busiest actors in post-war Germany and one of the few Germans who could also make a career in international film.

The son of a post office clerk financed his Abitur and later his private acting lessons by taking on extra roles at the Great Theater and the State Opera in his hometown. In 1936 Kolldehoff made his debut at the Landestheater Altenburg . In 1941 he had his first small cinema appearance in the Heinz Rühmann film Der Gasmann . In the same year he was called up for military service.

After the war , Kolldehoff was part of the ensemble of the Berlin Hebbel Theater until 1948 . In the following years he was also active on the stage, since 1955 at the Hamburger Schauspielhaus under Gustaf Gründgens . Kolldehoff turned his attention to a career in cinema. From 1948 he first appeared in some films for the East German DEFA , for example in Erich Engels Affaire Blum as a school teacher involved in a judicial scandal in the 1920s, later as a worker enthusiastic about the burgeoning National Socialism in Wolfgang Staudte's rotation (1949) and as a returnee from the war in Hans Müller's comedy Mayor Anna (1950).

Most of the critical acclaim were Kolldehoff's appearances in the cinema in Jacques Tati's Herrliche Zeiten (1967) as a confused German manager and in Luchino Visconti's Die Verdammten (1969) as a weary man of strength. One of his few main roles was the portrayal of a displaced village pastor in Peter Fleischmann's social satire Das Unheil (1972). 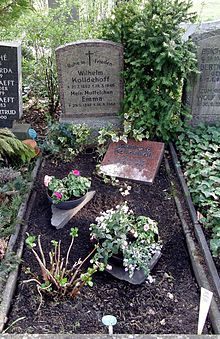 Kolldehoff's grave in the Wilmersdorf cemetery

Typical for the cast of Kolldehoff in the film were roles such as that of "club foot" in Fritz Lang's Die 1000 Augen des Dr. Mabuse (1960), that of the seedy “Butler Addams” in Josef von Báky's Edgar Wallace film adaptation The Strange Countess (1961) and that of the SS officer in Paul Verhoeven's The Soldier of Orange (1977). He was also featured in literary adaptations such as Everyone dies for himself (1962) based on the novel by Hans Fallada . As a voice actor he lent his voice to Lex Barker (in Just For My Wife ) and Sam Shepard (in In der Glut des Südens ).

Kolldehoff was cast almost exclusively in supporting roles. His gigantic stature and his distinctive voice impressed the audience for decades without his name becoming a household name outside of specialist circles. His outward appearance predestined him for appearances as a "film villain" and especially abroad for the type of the "ugly German". Although he took on many such roles, Reinhard Kolldehoff was repeatedly cast by directors contrary to his usual type of role and in unfamiliar contexts.

At the end of the 1980s, Reinhard Kolldehoff fell ill with Parkinson's disease and diabetes . He made his last appearance in front of the camera in 1989 for the German television series Forstinspektor Buchholz in a wheelchair. He then worked as a speaker for some time before he had to end his professional career.

Reinhard Kolldehoff died at the age of 81. He found his final resting place in the Wilmersdorf cemetery in Berlin. He was married for the second time and left behind his wife Helma and two children, Colette (* 1970) and René (* 1973).

“Yes, my life was very colorful. A nice career through three quarters of the world, I was called a world star. A nice feeling. Popular and respected. What remains - totally unable to work! God screwed up again. "

“ In Hollywood he would have been one of the 'heavies' - the actors who are not afraid of portraying violence. It was obviously too heavy for us. "