The Sportvereniging Roda Juliana Combinatie Kerkrade (until August 2010 only Roda JC ) is a football club from the municipality of Kerkrade in the Netherlands (in the south of the province of Limburg ), whose first team in the 2016/17 season in the Eredivisie , the highest Dutch football league, plays.

The club colors are yellow and black. The home shirt for the 2009/10 season is completely yellow. The sockets are also dominated by yellow. The pants are completely black. The away clothing is held in a light blue from jersey to shorts and socks.

Before 1962: history of fusion

Today's club is based on the merger of several regional clubs. The oldest of these, Juliana , was founded in 1910. The clubs SV Bleijerheide (1914), SV Kerkrade (1924) and Rapid '54 (1954) were founded later. 1954 merged SV Bleijerheide and SV Kerkrade to Roda Sport. In the same year, Juliana and Rapid '54 also merged and called themselves Rapid JC from then on. The latter should become the more successful in the next few years. In 1955/56 the team won the Dutch championship, in 1958/59 they came second. In an agreement dated June 27, 1962, the boards of directors of Rapid JC and Roda Sport decided to merge together to form Roda JC.

1962–1989: Development and establishment in the first division

The full name of the club was Sport Vereniging Roda Juliana Combinatie when it was founded . Roda is a reference to the region (Kerk rade , Herzogen rath ); JC is the abbreviation for Juliana Combinatie ( SV & AV Juliana was one of the predecessor associations from what is now Spekholzerheide, probably named after the heir to the throne who was born a year before it was founded ; Combinatie stands for fusion association). The club started its first year in the second division (1e divisie). But at the end of the season they were relegated to the 2e divisie. Until 1971 one fights for the rise again. Apart from 1969/70 when the team was only ninth, the club was always among the top five teams in the third division. In 1970/71 they were represented one class higher and achieved a respectful fourth place. In the following year, the team increased again and in the end there was no other team in front of the Kerkraders. This also meant promotion to the first Dutch league . In the first year, the club barely held the class. With 22 points from 34 games, the team is only one point ahead of the relegated FC Groningen and NEC Nijmegen . In the following years, Roda JC established itself and often reached single-digit positions. On April 7, 1976, the team was in the final of the KNVB Cup for the first time . There they had to admit defeat to PSV Eindhoven 1-0. In 1977 and 1979, the team reached fifth place. This was to be the Kerkrader's best ranking by 1986. Although three and five points less than 1977 and 1979, it was enough to place four in the league in 1986/87. In addition, Roda reached the final of the national cup for the second time. They managed to score two goals, but lost again to PSV Eindhoven 3-2. Nevertheless, it qualified for the European Cup Winners' Cup for the second time since 1977 . In the first and second round, they won first against Portuguese club Vitória Guimarães and then against the Soviet representative Metalist Kharkiv . In the quarterfinals, the team was then eliminated only after a penalty shoot-out against the Bulgarian team CSKA Sofia .

In 1992, the team wanted to finally win the trophy in the new KNVB Cup final. But this time too they were left behind and had to go home as a loser with 0: 3 against Feyenoord Rotterdam . In 1994/95 the team celebrated their greatest success to date when they took second place behind Ajax Amsterdam . With sixteen goals, striker Maurice Graef made a significant contribution to the success. With only twenty-eight goals they had as many as the eventual champions, and with 70 goals scored themselves, the Kerkrad attackers were third-best in the league. Only in 1985/86 did the black and yellow strikers score more goals (76), but they never conceded fewer goals.

After the off in the first round in the UEFA Cup against FC Schalke 04 with 0: 3 and 2: 2 changed successful coach Huub Stevens beginning of October 1996 to the Gelsenkirchen Kirchnern with which he sensationally 1997 UEFA Cup winner against Inter Milan was .

Already in 1990/91 Roda JC was eliminated in the first round of the first UEFA Cup participation.

On May 8, 1997, the SC Heerenveen were opponents when they returned to the final of the Dutch Cup. With 4: 2 they prevailed for the first time and were able to celebrate the first national club title in club history. This qualified them again after nine years for the European Cup Winners' Cup. In the first round there was then against Hapoel Beersheba from Israel with 10: 0 the highest victory in a competitive game for Kerkrade. But a 0: 5 in the quarterfinals against Vicenza Calcio also means the biggest defeat in an international competition. In 1999/00 it came in the UEFA Cup, the team qualified by fifth place in the league, for the second meeting with a German team. As against Schalke in 1996, they drew once against VfL Wolfsburg and lost the second game. In the national cup, however, things went better. There you only had to intervene in the tournament from the round of 16 and won this round against Ajax Amsterdam. They reached the final via FC Utrecht and Vitesse Arnheim . A game with a result other than 1-0 was never won. In the final, the team scored twice against NEC Nijmegen and won 2-0. It was the second cup success after 1997. This allowed you to participate in the 2001/02 UEFA Cup . With successes over the Icelandic club Fylkir Reykjavík , the Israeli team from Maccabi Tel Aviv and the French from Girondins Bordeaux , the team had to go to AC Milan in the round of 16 . After a 1-0 defeat in the first leg, the Italians were forced into penalties after a 1-0 return win . There the Kerkrad players lost out and lost 2: 3.

Since then, there have been no notable successes. In 2008 the team was back in the final of the KNVB Cup, but lost 2-0 against Feyenoord Rotterdam. Roda has not qualified for an international competition (except for the Intertoto Cup ) since 2001. For the 2008/09 season they only reached 16th place in the table and thus had to go into the relegation phase. While you could still win five games in the first half of the season, it was only enough to win two in the second half. Nevertheless one could still avert the descent. With the beginning of the new season, the club fought again to stay in the league, but was able to stabilize in the second half of the season and ultimately reached ninth place. For the 2010/11 season the club , which was in financial difficulties, received a loan from the city in return for a 37 percent stake in Parkstad Limburg Stadium ; In return, the club added the name of the city to the club name and has since been officially called not just Roda JC , but Roda JC Kerkrade . The team was able to establish itself again in the first half of the table during the following season.

A merger with Fortuna Sittard , which has been discussed for years, was decided by a joint commission of the two clubs at the beginning of April 2009, but was rejected a few days later. The name of the new club should be Sporting Limburg . However , due to the financial difficulties of both clubs, the province of Limburg found the risk of putting 6.5 million euros into the new merger club as too high. The financial planning for Sporting Limburg had thus become obsolete. After the decision, both clubs wanted to try to exist independently. The then President Servé Kuijer , who had led the association since 2000, also failed because of this project . Fans and supporters forced him to resign because of the planned merger.

The fans and supporters of Roda Kerkrade were in close contact with the club and the team in the early years. This was due to the fact that neither the field nor the changing cubicles were fenced in at the former Kaalheide stadium. The site was not fenced in until the 1970s. A roofed grandstand was set up for fanatical supporters in the north curve. The mix between the players, the board and the team was still possible. Since the move to the Parkstad Limburg Stadium, there is a fangerade directly behind the north gate. Safety has been increased and greater distance from the field and players has been established. This intensified the relationship between the club's leadership and its supporters. The surge came about through a planned merger (see above) in 2009 with rival Fortuna Sittard . This should offer new financial opportunities, as the club had economic problems. Some board members resigned under threat of violence. Other fans set up an institution called Hart voor Roda organiseert (Foundation: Heart for Roda) to support the club. With the help of events and events, money is mainly collected for the club.

Other fan projects are: 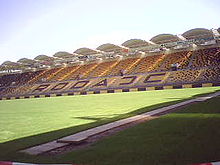 Roda JC has been playing his home games at the Parkstad Limburg Stadium in the municipality of Kerkrade since August 2000 , which has a capacity of almost 20,000 spectators. It was built between 1999 and 2000. Roda Kerkrade inaugurated the stadium on August 15, 2000 in a friendly against the team from Real Saragossa .

Up to and including the 1999/00 season, the Kaalheide Sports Park , also in Kerkrade-Kaalheide, was Roda's home.

The predecessor club Rapid JC Kerkrade was Dutch champions in 1956 and the first title holder to take part in the European Cup for the Dutch Association . Roda JC won the Amstel Cup , the former KNVB Cup, in 1997 and 2000. 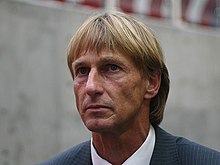 On March 1st, 2008, the club founded a women's team especially for the Eredivisie for women , which had been newly founded a year earlier . The first coach was the former professional player René Eijer . On July 20, 2008, the team completed a game for the first time. Opponent was a male B-Junior team from The Star RKSV . The Roda women lost 0: 4. Three days later, on July 28th, the team celebrated a 3-2 win against German representative Teutonia Weiden in their first international and first game against another women's team . On August 23, 2008, the Kerkraders played their first competitive game. In the point game against the women of ADO Den Haag , they drew 2-2. With just one win and four draws from 24 games, the 2008/09 season ended in last place in the table. Since the club was also charged three minus points, there were only four points on the account. With 22:65 goals, the team had scored the fewest goals and received the most goals. The best shooters with four goals each were Stephanie Harmsen and Shirley Kocacinar . On May 5, 2009, the board announced that it would dissolve the women's team for financial reasons. In addition, they did not see themselves in a position to be able to set up a competitive team.

In addition to the Jong Roda JC , young footballers from E to A youth are looked after.