The Moos Castle is a castle in the village of moss of the Upper Palatinate municipality Kümmersbruck in the district of Amberg-Sulzbach of Bavaria . The trenches around the former moated castle were fed by the Krumbach and drained at the beginning of the 20th century.

The facility was on the trade route leading from Nuremberg via Amberg to Hiltersdorf and Nabburg to Bohemia and was secured by the owners of the property. Moos was the seat of the noble family of the von Moos. In 1121 Otto von Moß is documented as a witness on the occasion of a donation to the Ensdorf monastery . In 1126 Hermann von Moße is mentioned, also as a witness of a donation from Wienand von Wolfsbach to the monastery. In 1166 another Otto von Mose is a witness when Engelsdorf came to the monastery. In 1190 a Friedrich Mosaer is also mentioned as a documentary witness. It is not known in which services this family was and also their coat of arms. Presumably at that time there was no brick seat, but a moth piled up on a hill . The von Moos family appears until the end of the 12th century, then its trace is lost.

In the first half of the 14th century, moss was already a Hofmark . The Nortweiners, who were wealthy in the area ( Theuern , Kümmersbruck Castle ), are named as owners . In 1326 Ruger Nortweiner, Vitztum von Amberg, received the income from the ducal court of Moos. In 1369 his son Wolfhardt Nortweiner took over the property. In the same year his widow, Anna the Nortweinerin von Moos, sells the estate to Wolfhardt, the Reich von Amberg. In the control system of the Rieden maintenance office from 1441 you can find a Krezl to the owner of the country estate . In the middle of the 15th century Moos came to Jörg Kastner († 1464). The other ownership relationships are confused, but in 1568 Georg Fraihslich (Fraislich, Freißner) appears as the owner, but then again in 1525 Paul Hegner († 1536). He was married to Dorothea Kastner von Schnaittenbach († 1559). The sons of Paulus Hegner, Hector († 1563) and Endres (Andreas), owned moss together. Andreas († 1590) was married to Susanne, b. Trainer. The widow married Christoph Kastner († 1626) von Ittelhofen . He was succeeded by Christoph Hegner († 1634), married to Maria Kastner von Holzhammer . His son Wilhelm (* 1614) could not take over Moos due to excessive indebtedness and Moos was auctioned off after Christoph Hegner's death.

The seat came into the center of Bavarian history when Elector Maximilian surrendered the city of Amberg to Moos Castle on October 8, 1621 after the Battle of White Mountain . With this, the seat of the Electoral Palatinate came back to Bavaria. The elector stayed here several times because he felt safer in Moos than in Amberg.

Because of the high level of debt, the property went to the government in Amberg, which gave it to the rent master Georg Egid Siggenhausen. In 1634, Englbert von Hirschau appeared here together with Hans Konrad von Lichtenau auf Lendting as Siggenhauser's guardian; both sell moss on February 15, 1656 to August von Fritsch (born April 23, 1662), who also owned Kümmersbruck Castle and was then captain of Waldsassen . After his death, his widow Salome handed over the property to her son Johann Michal von Fritsch in 1665, who died without male descendants on April 27, 1697 as a councilor in Amberg.

The property then went to his daughter, Maria Franziska von Fritsch, who married the government councilor Johann Kaspar Miller von Ammerthal in 1669 . The couple had a daughter, Maria Martha. On February 25, 1695, she married Max-Adolf von Boslarn, the keeper of Weiden († June 23, 1733). The next followed in 1735 by their son Franz Josef Sebastien von Boslarn, electoral councilor, the castle. In 1738 he had the residence converted into a baroque castle, as it still exists today. After his death († April 22, 1760) the property passed to his 19-year-old son Konrad Josef, who died three days later. The widow Maria Walburga von Boslarn, b. Werner was so saddened by this stroke of fate that she entered the Salesian convent in Sulzbach . Moos handed it over to her son, the former Jesuit priest Franz Josef von Boslarn. He taught mathematics and physics at the Amberg Lyceum . Since he was unmarried, the property went to Maria Anna von Pelkoven , née von Boslarn. She was the sister of the spiritual councilor Josef von Boslarn. After her death († August 12, 1828) Moos passed to her son Johann Nepomuk von Pellkovern on Theissing, royal Bavarian treasurer and government and district school councilor. He sold the castle to the royal on April 21, 1829. District Administrator and Magistrate of Amberg, Johann Nepomuk Wurzer. The next owner is Franz Xaver von Simmler from Ebermannsdorf . Two of his daughters, Anna Katharina and Amalia Walburga, moved into Moos Castle in 1855. Chief forester Johann Thoma inherited the property from his aunts, who died around 1879 († June 11, 1897). His widow Anna Thoma sold Moos Castle on May 2, 1904 for all reasons to the Amberg-Land Loan Association.

In 1904 the entire property belonging to the castle was smashed and the castle chapel was donated to the municipality of Moos. A year later, Leonhard Bernreuther acquired the castle, who renovated it in an exemplary manner. Then it came to the Uwe Hermann family, who set up a flower school here.

The newly renovated castle is a three-storey solid building with a hipped roof , dormers and simple plaster structure. The construction goes back to the late Gothic period, it may have been a permanent house before . In 1738 it was rebuilt with the exception of the four main walls. Until the renovation, it was a well-fortified building with 1 m thick walls on the ground floor and slits of light instead of windows. Two more have survived on the east side. There is an exposed late Gothic window with a straight lintel and stone on the first floor , as well as a toilet bay. The building originally had high stepped gables , which were hewn down during the renovation in 1738 and the interior of the house gutted. With the exception of the east facade, the facades were designed symmetrically. 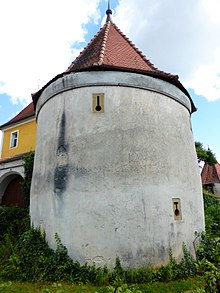 Corner tower of the curtain wall with key notches

A circular wall with numerous key notches hewn from ashlar and four protruding corner towers from the first construction phase stretches around the castle . This is about 3 m high and 80 cm thick. On the inside there is a heel under the notches, on which so-called bounce wood was presumably placed. The hook on the underside of the rifle barrel of the hook bushes could be pried into this beam to reduce the recoil. The protruding corner towers made it possible to fire from the side of the wall base. These were originally inwardly open shell towers , which were later closed by wooden walls. The tall helmets were put on during the last renovation (1982–1984).

The former moat can still be seen as a strip of wasteland on the south and east sides. The facility is accessed from the north; there used to be a bridge here, the inner part of which could be raised.

Castles and palaces in the Amberg-Sulzbach district