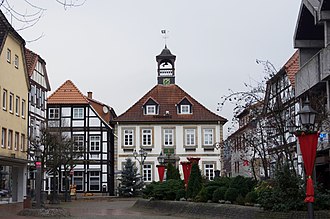 Bad Münder am Deister is a spa town in the Hameln-Pyrmont district in Lower Saxony . The city with 16 districts has around 17,400 inhabitants (as of the end of the 2010s). The core town of Bad Münder is the administrative center with around 8,000 inhabitants.

Bad Münder am Deister is located in the Deister-Süntel Valley on federal highway 442 and is surrounded by the wooded Deister and Süntel mountain ranges in the Weser Uplands , north of Hameln . The Hamel flows through the city.

The following municipalities border the urban area in a clockwise direction:

Since the regional reform on January 1, 1973, the town of Bad Münder am Deister has belonged to the Hameln-Pyrmont district and consists of the 16 districts listed below:

The place in the Deister-Süntel valley was first mentioned between 856 and 869 as "Munimeri". The healing power of the brine, sulfur and bitter springs was known early on. Monks may have come from Minden on foot because of the brine springs , at least almost 50 km. This could give rise to the name "Mindener Pay", which over time could have developed into "Mündener Pay". The actual origin of the name is uncertain. Certainly Münder appears in a document from Emperor Conrad II in 1033 as "Munnere". Salt production , which had existed since 1033, was not stopped until 1924. A Cistercian monastery was founded in Loccum in 1306 in what is now Hamelspringe .

During the Hildesheim collegiate feud from 1519 to 1523 and in the Thirty Years' War , the city was completely destroyed. In the Klein Süntel district, the Klein Süntel glassworks produced hollow glass and other glass products with interruptions between the 17th and 19th centuries . In 1872 Münder got a railway connection to the network of the Hanover-Altenbeken Railway Company .

The history of the Jews in Bad Münder begins around 1700 when protective Jews were first mentioned in a document. The Jewish cemetery of the community is documented for the first time in 1782; from 1835 there was a synagogue in the village . In the 19th century around 50 people of Jewish faith lived in the village. After that, their number fell to less than 10 people in the 1930s at the time of National Socialism . Jewish citizens were deported from Bad Münder in 1942. At least 18 people who were born or lived in Bad Münder were victims of the Holocaust .

In 1936 Münder received the status of a spa town, so that Münder became Bad Münder and today it bears the title “State-approved mineral spring spa”. The health resort has a charming old town with historic half-timbered houses and sandstone buildings from the Weser Renaissance . The city lives today, apart from the glass and furniture industry , mainly from health care and tourism .

On September 9, 2002, 40,000 liters of the chemical epichlorohydrin were released in a train accident .

Due to the incorporation, there was initially a statistical increase. But over the course of more than 50 years (as of 2015) a steady decline has been recorded, the reasons cannot be precisely stated.

The council of the city of Bad Münder am Deister consists of 32 councilors and councilors. This is the specified number for a city with a population between 15,001 and 20,000. The 32 council members are elected for five years each by local elections. This term began on November 1, 2016 and ends on October 31, 2021.

The full-time mayor is also entitled to vote in the city council.

The local election on September 11, 2016 led to the following result:

Mayor until the end of World War II

Blazon : “The city's coat of arms is a green shield with a black border and in the middle shows an upright golden lion with red claws, red tongue and red eye, looking to the left from the perspective of the observer. Above the sign is a three-tower stone-colored wall crown shown in red. "

The coat of arms is derived from a seal from 1318. The lion stands for the former sovereigns of the princes of Lüneburg . The top of the wall stands for the city as such; town charter was granted at the end of the 13th century.

The city's flag is green with the city's coat of arms in the middle.

In the main town there are two museums sponsored by the local group of the Heimatbund Lower Saxony :

In the district of Eimbeckhausen there is a museum sponsored by an association:

In the district of Bakede there is the handicraft museum and the paths of the senses with 20 stations.

The federal highways 442 and 217 offer connections to Hameln, Hanover and to the Lauenau junction of the federal motorway 2 .

Passenger traffic on the former Bad Münder – Bad Nenndorf railway was discontinued in 1968 and the last remaining goods traffic in 1995.

In the core city:

Municipalities in the district of Hameln-Pyrmont

Districts of the municipality of Bad Münder am Deister