The Technical University of Cologne ( TH Köln ) is the largest university of applied sciences in the Federal Republic of Germany with 26,000 students and 430 professors . The TH Köln offers a total of around 100 bachelor's and master's degree programs , full-time, part-time and as a dual study program. 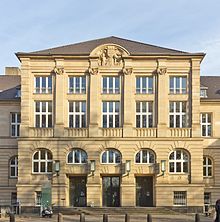 Central staircase in the Südstadt campus

Some previous institutions can be traced back to the "Royal Provincial Trade School" founded in 1833.

The university was founded on August 1st, 1971 under the name of Cologne University of Applied Sciences ( FH Köln ) and is one of the first wave of technical universities in Germany and one of the first in North Rhine-Westphalia . The founding rector was Johann Atrops . As was common at the time, existing training facilities were combined to form a university of applied sciences. These were:

On April 3, 1995, the University of Applied Sciences for Libraries and Documentation (until 1982 “Librarian Training Institute of the State of North Rhine-Westphalia”) was incorporated as the 22nd department “Library and Documentation” (today integrated in “Faculty 03”).

On October 8, 2014 Christian Averkamp, Dean of Campus Gummersbach, the name change of confirmed Fachhochschule Köln in Technical University of Cologne , which was already in February 2014 in an interview. The name was changed in September 2014 by an announcement to Technische Hochschule Köln ; The name has been used officially since the 2015/16 winter semester, which began on September 1, 2015. In addition to the renaming, the corporate design of the university was also revised and given a new logo. The university retains the status of a university of applied sciences.

The TH Köln has its headquarters at Römerpark in Cologne's Südstadt . The prestigious building erected in 1907 for the Cologne University of Applied Sciences at the time , which was incorporated into the University of Cologne in 1919, was designated as the main building and the headquarters of the administration . This used the building until 1934. After that, the Gauleitung of the Gaus Köln-Aachen of the National Socialist German Workers' Party moved in here . After the war u. a. the Lufthansa here until 1969 its Germany headquarters. The building has been a listed building since 1985 .

At the entrance of the TH Köln in Claudiusstraße (Campus Südstadt, GWZ) there has been a memorial for the names of the authors since 2001 , a reminder of the book burning in May 1933 in front of the main university building at that time, with the names of authors ostracized by the Nazis who were written with iron in basalt lava blocks are and will be admitted, an idea of ​​the art critic Walter Vitt .

The main building of the Deutz campus is in need of thorough renovation. A renovation in the current academic mode after the experience of the old building (it was in the years 2005 to 2008 redeveloped ) only with significant restrictions may apply. Due to the change in the Abitur from 13 to 12 years, there have been more new students since 2013. These exceed the current capacities of the campus. For this reason, a new building on the former site of the Dom brewery in the south of Cologne was discussed. This would then be in the immediate vicinity of the Südstadt campus, so that a single campus would be created in Cologne. However, these plans were discarded. Instead, it was decided to demolish the old main building of the Deutz campus , but to rebuild it in the immediate vicinity on a piece of land that is still vacant.

At the end of 2016, the university announced that it wanted to completely rebuild the Deutz campus by 2030. This is estimated to cost 320 million euros. According to the plans, which have existed since 2012, the site will encompass around 100,000 square meters. The start of construction was originally planned for 2015, but due to disagreements with the owners of the surrounding land that was bought for the new building, this is expected to be delayed until 2020. Around 80 percent of the previous buildings are to be demolished for the new building, only the campus library and the old building on Deutz-Kalker-Straße should be preserved. The new building will be divided into three construction phases. A new lecture hall and IT center are to be built by 2022. In the second construction phase, a new cafeteria and a learning center for electrical engineers and mechanical engineers are to be built. The third construction phase, which is planned from 2024, calls for the demolition of the IWZ main building. The new campus is designed for around 8,500 students. The current campus only has a capacity of 5,000 students and is overloaded with up to 10,000 students. The exact building designs are to be decided through architectural competitions, but the university does not want to build new buildings with more than six floors.

It was only in June 1983 that it became the Gummersbach campus of the TH Cologne.

In August 2007, the company finally moved to a new building on the Steinmüller site in Gummersbach.

This created new places in the technical and pharmaceutical chemistry courses for the 2009/2010 winter semester . These courses were not previously offered by the TH Köln. The new campus will be built on the site of the new railway city: opladen . On June 21, 2014, Minister Walter-Borjans handed over the request so that construction can begin. The course events will take place in Chempark Leverkusen until completion .

Astrid Rehorek was appointed founding dean of the Faculty of Applied Sciences (F11). She followed in the 2012/13 winter semester as the first elected dean Matthias Hochgürtel.

The TH Köln is headed by a full-time executive committee.

Members of the new university council have been since February 1, 2018:

The Senate is made up of members of the university (professors, employees, students) and supports the Presidium in its tasks. It meets for regular university-public meetings.

The basic organizational units of the TH Köln form the twelve faculties with their numerous institutes. The faculties are headed by a faculty council and a dean or dean 's office. The faculties currently offer a total of around 90 courses.

The faculties in turn consist of institutes that were formed according to subject-specific criteria and are each supported by a small, medium or large number of professors. Depending on requirements, employees in research and teaching, technicians and other specialist staff are also located there. Each institute is headed by a committee (institute board with director). The large institutes in particular - such as the Institute for Computer Science with almost 30 professorships - are usually divided into laboratories that represent individual areas of expertise and are responsible for the corresponding teaching and research activities.

Central facilities complement the university's internal range of services. These include, for example, the "Campus IT" for the provision of information technology and services, various technical workshops and the university library.

The courses offered by the TH Köln are implemented in the faculties. Diverse research activities are also located here. The faculties initially emerged from the previous departments in September 2002 . At that time ten faculties were formed. An eleventh was added in 2009. The youngest faculty was founded in October 2019.

Other institutes and facilities

The KISD is a multi-award-winning institution of the TH Köln, which offers courses in the field of design .

The Institute for Design is an institute within the Faculty of Architecture at the TH Köln. The institute's focus is on experimental design, CAD / CAM, corporate architecture and design.

In the Cologne Game Lab (CGL), which is operated in cooperation with the International Film School Cologne , training and further education for games , game developers and game design take place.

The ZBIW is a training provider for employees of public and academic libraries and other information facilities. The offers are aimed at employees who want to gain further qualifications while working, as well as at organizations and companies. The ZBIW is part of the Institute for Information Science of the TH Köln.

The Sustainable Technologies and Computational Services for Environmental and Production Processes (STEPs) is the first research institute of the TH Köln. The institute has set itself the goal of developing sustainable technologies for the environment and production. In interdisciplinary projects, research is carried out to find environmentally friendly, yet economical solutions for product development and process optimization. Another goal is to promote young scientists.

The university has set the following priorities in research and development:

The TH Köln is spread over five locations in three cities:

In the CHE university ranking, the TH Köln (as of 2017) ranks in the middle of all rated universities of applied sciences. In 2015, the Faculty of Economics (F04) came third nationwide for business studies.

In surveys of HR managers, the TH has been in the top 10 or top 5 in engineering subjects for about 10 years:

In 2009, the TH was awarded one million euros among 108 universities for the implementation of its educational diversity concept in the competition for excellence in teaching, which was launched by the Stifterverband für die Deutsche Wissenschaft and the Kultusministerkonferenz . Here, students are provided with more individual learning materials on an online platform.

In 2014 the Cologne University of Applied Sciences completed the machine house transfer project with the Association of German Mechanical and Plant Engineering (VDMA). The aim of the project is to increase the success of studies through improved course planning through the so-called curriculum workshop.

TH Köln has its own motorsport racing team, which was founded in 2006 as FH Köln Motorsport eV . A touring car is used as the only student racing team. Cooperations exist with Honda , Ford and Audi , whose cars also take part in the VLN endurance championship Nürburgring .

TH Köln is a member of the Graduate Institute NRW. On July 11, 2019, the institute was transformed into a legally independent doctoral college due to a change in the University Act. The graduate institute primarily enables and arranges cooperative doctorates.

With the abolition of tuition fees in North Rhine-Westphalia, the Technical University of Cologne has stopped charging tuition fees since the 2011/12 winter semester. However, a semester fee of approx. 274 euros (2019) has to be paid. This fee already includes the semester ticket, which entitles you to unlimited travel in public transport throughout North Rhine-Westphalia. In addition, one additional person can be taken along free of charge in the Rhein-Sieg transport association (VRS) in the evenings and at the weekend . Thanks to a cooperation with the Cologne transport company , the KVB-Rad rental bike offer can be used free of charge for 30 minutes per trip. The remaining part of the semester fee is used by the Kölner Studierendenwerk to look after the students .