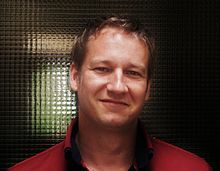 Tobias Kluckert is the son of the actor Jürgen Kluckert . He first grew up in Berlin, but lived in Rostock from 1982 to 1989 . There he played for six years as a child and youth actor in the theater. After graduating from high school in 1991, Kluckert studied political science for four semesters at the Free University of Berlin before he began training as a businessman in 1993 and completed it in 1995. From 1994 to 2001 Kluckert was also employed as a bartender in the Berlin district of Prenzlauer Berg in the Blaumilchkanal pub and worked as a lighting technician and sound assistant for film and television . 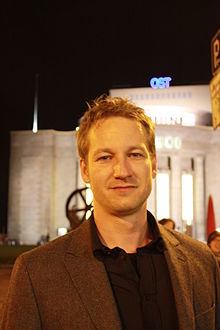 Tobias Kluckert lives in Berlin. He is the father of a daughter.

From 1997 he took acting lessons in parallel and was trained in speech education and singing . From 1998 to 2006 he dubbed Brian Krause as Leo Wyatt in the eight-season fantasy series Charmed . At the same time, he applied to the Berlin-based dubbing studios and worked as an ensemble speaker for four years, where he lent his voice to the character of Raditz in the anime series Dragonball Z , before taking on other leading roles in 2001, including for Mekhi Phifer in O - Confidence, seduction, betrayal (2001) or for Michael Vartan as Michael Vaughn in the crime series Alias ​​- The Agent (2003).

To his most important roles the synchronization of one Joaquin Phoenix in the film adaptation of Johnny Cash - biography Walk the Line (2006). Kluckert is now regularly used for dubbing Seth Rogen , Tyrese Gibson , Bradley Cooper and 50 Cent and increasingly for Kevin McKidd , Jason Bateman and Gerard Butler . In the last few years until his death in 2008 he also dubbed Guillaume Depardieu . In 2006 he lent Eli Roth his voice in the film Aftershock - Hell after the quake (director: Eli Roth). In 2007, he spoke the roles of narrator / Dilios for David Wenham in the comic book adaptation 300 . In 2012 he voiced Tom Hardy as Bane in the comic book adaptation The Dark Knight Rises and Karl Urban in DREDD (3D) . Since 2012 he has been the standard dubbing voice for Jason Clarke . In the 2019 re-edition of Stephen King's Stuffed Animals Cemetery , he will play the lead role in Louis Creed. He also speaks Clarke et al. a. starred in the films White House Down , Planet of the Apes: Revolution , Everest and Departure for the Moon .

Kluckert's voice is known to television viewers through several series characters, including He-Man in Masters of the Universe (2003), Eric Balfour as Eddie in OC, California (2004), Kevin McKidd as Dr. Owen Hunt in Grey's Anatomy (since 2009), Stephen Moyer as Bill Compton in True Blood (2009–2015) for Nathan Fillion as Richard Castle in Castle (2009–2016) and John Nolan in The Rookie (since 2019), also for Adam Baldwin in the television series Firefly - Der Aufbruch der Serenity (2002/2003, as Jayne Cobb) and Chuck (2007–2012, as John Casey). He also speaks for Tyrese Gibson, the role of the novel Pearce in the films 2 Fast 2 Furious , Fast & Furious Five and Fast & Furious 6 . Tobias Kluckert also speaks Andy Whitfield and Liam McIntyre in Spartacus (2010–2013) and the character Shane Walsh, played by Jon Bernthal , in the series The Walking Dead (2010–2012). From 2008 to 2012 he dubbed the character of Harry "Opie" Winston in the series Sons of Anarchy . From 2008 to 2013 he voiced Charles Baker ("Skinny Pete") on the Breaking Bad series. In the Netflix animation series BoJack Horseman , he played the leading role from 2014 to 2020. In the science fiction series Future Man , which was filmed in 2017-2019 and published in German on Prime Video from 2018 , he lent his voice to Derek Wilson in the role of Wolf.

Kluckert also uses his voice to set computer and video game productions to music , including as Martin Septim in The Elder Scrolls IV: Oblivion , as Captain Rumford in Diablo 3 , as Tron in Kingdom Hearts 2 , as Kane in The Legend of Spyro : The new beginning , as Alex Mason in Call of Duty: Black Ops and Call of Duty: Black Ops II , and as Edward Kenway in Assassin's Creed IV: Black Flag (2013). He has also been the voice of the adult Master Chief from the Halo video game series since 2012. He previously did this in the video games Halo 4 and Halo 5: Guardians , the animated short film contained in the Halo Legends short film collection The Package and the real- life film Halo 4: Forward Unto Dawn released in late 2012 .

In the film Joker (2019) he lent the leading role Arthur Fleck, played by Joaquin Phoenix , the German voice.

In 2000, Kluckert could be seen alongside Horst Jüssen and Regine Lutz under the direction of Rolf Hochhuth in the production The Midwife at the Berlin Theater on Schiffbauerdamm . He also appeared in the UfaFabrik and in Katja Nottke's Kiez Theater , among others as part of the Berlin Nights in 2006 and in 2007 and 2008 in the Brecht revue Nur Now Don't Be Soft . In the early 2000s , Kluckert acted in front of the camera in various short films and in the ZDF series Coast Guard and Rosa Roth .

In addition, Kluckert acts as an off- voice for documentaries and commercials .

Tobias Kluckert could be heard as part of the improvised , interactive radio play Bei Call Soap broadcast by Deutschlandradio and, in addition to dubbing, is also active in the field of audio productions. In the radio play series Richard Diamond, Privatdetektiv , produced by Lauscherlounge Records , Kluckert plays the leading role of the same name and also appears in the form of this figure in staged readings in the Lauscherlounge. He can also be heard recurring in episodes of the horror cabinet series of Titania Medien ( Der Untergang des Haus Usher , Frankenstein, Der Freischütz, Dracula 2 and 3 ), as Chuck Novak in Jack Slaughter and in the mystery series Revelation published by LPL Records 23 . He has been reading the unabridged, non-staged audio books in the Cotton Reloaded series since 2012 .

In episode 38 of the radio play series Gabriel Burns , he plays the role of the fisherman Bobby Mills at the side of his father Jürgen Kluckert, who, as always, can be heard as the narrator.

In the radio play series Pater Brown from the WinterZeit label , he has taken on the co-leading role of the detective Hercule Flambeau.

As an audio book interpreter, Kluckert has read the unabridged versions of The Pillars of the Earth , The Gates of the World and The Foundation of Eternity by Ken Follett , the fantasy series The Sword of Truth by Terry Goodkind , In the Time of Death by David Baldacci , Blackmail by Greg, among others Iles or Nele & Paul by Michel Birbaek and Manhattan 2058 by Dan Adams 2018 from Lübbe Audio.

He has also read the previous volumes ( Der Spielmann , Der Lehrmeister ) of the Faustus series by Oliver Pötzsch , which were published in 2018 and 2019.

2001: Norbert Zähringer : The little ones and the bad ones - Director: Annette Berger (radio play - DLR )