Michael Rico Lang (born February 8, 1991 in St. Gallen ) is a Swiss football player . He is under contract with Borussia Mönchengladbach .

Michael Lang spent his junior years exclusively at FC St. Gallen . On May 24, 2007, he played for the first time in the Super League at the age of 16 when he was substituted on for FC St. Gallen in the game against FC Aarau . The midfielder has since been one of the three youngest players who have been employed in the highest league in Switzerland. From that day on, Lang was in the squad of the professional team of St. Gallen.

In June 2011 he moved to the Grasshopper Club Zurich . In the 2012/2013 season he won the Swiss Cup with his new club . In addition, the Grasshoppers with Lang as regular players were runner-up in the 2012/13 and 2013/14 seasons and each qualified for the Champions League qualification where they were eliminated in 2013 against Olympique Lyon and in 2014 against OSC Lille . 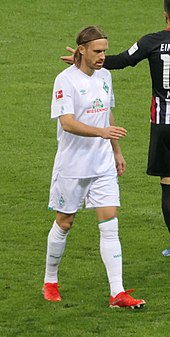 On the 3rd matchday of the 2019/20 Bundesliga season , Michael Lang moved to Werder Bremen on loan until the end of the season . The loan agreement contains a purchase option after it has expired. As a result of the extension of the season due to the COVID-19 pandemic , the loan contract was extended until the relegation games were completed on July 7, 2020. Lang played nine times for Werder Bremen in the Bundesliga and once in the DFB Cup. After the loan ended, he returned to Borussia Mönchengladbach.

Lang completed a total of 64 international junior matches for Switzerland and took part in the U-17 European Championship in 2008 in Turkey and the U-19 European Championship in 2009 in Ukraine . On August 14, 2013, Lang made his debut for the Swiss senior national team at the age of 22 . In the friendly against Brazil , he came on in the 62nd minute. In the summer of 2014 he was on the 23-man squad of the Swiss national team for the World Cup in Brazil . In the last group game on June 25, Lang made his first World Cup appearance against Honduras .

At the Euro 2016 in France he was included in the Swiss squad. He came to two short appearances in the group matches against Romania and France when he was substituted on in the final minutes. In the last sixteen, which the team lost, he was not used.

At the 2018 World Cup in Russia, he is also part of the Swiss squad . In the group stage, the 1-1 draw against Brazil and the 2-2 draw against Costa Rica made short appearances in the final minutes of the game. In the round of 16 against Sweden, however, he was in the starting line-up and received the red card in the fourth minute of stoppage time . As a result, he was suspended for the Swiss team's first game in the 2018/19 UEFA Nations League , as Switzerland ended the World Cup after losing 1-0 to the Swedes.

Squad of Borussia Mönchengladbach in the 2020/21 season

Swiss footballer of the year