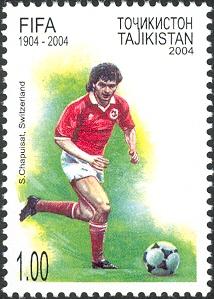 Before starting his football career, Chapuisat completed an apprenticeship as a commercial clerk in a trust office in Switzerland. Like his father Pierre-Albert Chapuisat , “Chappi”, as his nickname is, began his footballing career in 1987 with Lausanne-Sports , where he soon topped the Swiss top scorer list and made his debut in the Swiss national football team. In January 1991 Chapuisat moved to the Bundesliga for Bayer 05 Uerdingen , where he scored four goals in ten games. The manager of Bayer 05 and the initiator of the move was Felix Magath . After a serious injury at the beginning of the time in Uerdingen and the relegation of Uerdingen, Chapuisat left the club after only six months and was brought to Borussia Dortmund by the new coach Ottmar Hitzfeld for the 1991/92 season . He wore the number 9 on his jersey. In Dortmund he scored 20 goals in 37 games in his first year and quickly became a crowd favorite. With these 20 goals, he finished second in the German goalscorer list and shot Borussia to the runner-up championship.

In 1993 he made a significant contribution to reaching the UEFA Cup final (3-0 and 3-1 against Juventus Turin ) and scored 15 goals in 27 games in the Bundesliga. In 1994 he scored 17 goals in 30 Bundesliga games, he also played with Switzerland at the 1994 World Cup , scoring 2-1 in the group game against Romania .

German champion and winning the Champions League with Borussia Dortmund

Despite a torn cruciate ligament in the spring of 1995, which Chapuisat suffered during training, he scored twelve goals in just 20 games, which made him significantly involved in winning the German championship of Borussia Dortmund in the 1994/95 season.

Due to this cruciate ligament tear, he also missed the entire qualification for the 1996 European Championship with the Swiss national team. Nevertheless, and although he scored only three goals in 17 games in the 1995/96 season, he was eventually used in the finals.

In 1997 came his climax in club football: Chapuisat won the UEFA Champions League with Borussia Dortmund when they defeated Juventus Turin 3-1 in the final at the Munich Olympic Stadium . He contributed with an overhead kick submission to Karlheinz Riedle's header in the quarter-finals against the then French champions AJ Auxerre . In 1996/97 he scored 13 goals in 30 games in the Bundesliga. In the 1997/98 season he scored 14 goals in 27 Bundesliga games and won the World Cup in Tokyo, where Dortmund defeated Cruzeiro Belo Horizonte from Brazil 2-0. Borussia Dortmund also reached the Champions League semi-finals. In a German-German quarter-finals, Dortmund played defensively in both games against Bayern Munich ; Bayern were overwhelmingly superior, but in the second leg Chapuisat scored 1-0 in extra time (first leg 0-0). The goal brought BVB to the semi-finals against Real Madrid . The semifinals became known as the so-called “ Madrid Torfall ”. Shortly before the start of the game, Madrid fans brought a football goal down. The game kicked off one and a half hours late and Dortmund was eliminated after a 2-0 draw (0-0 second leg).

After his last year with Borussia Dortmund in 1998/99, in which he still scored eight goals and three assists for BVB, he moved back to Switzerland to the Grasshoppers Zurich .

In his 228 Bundesliga appearances, he scored 106 goals and received 21 yellow cards. This made him the first foreign football player in the history of the Bundesliga to score over 100 goals, and overall behind Robert Lewandowski , Claudio Pizarro , Giovane Élber and Vedad Ibisevic and together with Aílton the fifth most successful foreign goal scorer (as of May 2020). The 106 goals mean an average of 0.47 goals per game. There are also 4 goals in 16 DFB Cup games and a total of 16 goals in 44 European Cup games.

From 1999 to 2002 he played for Grasshopper Zurich, with whom he won his first Swiss championship title in 2001. In the 2000/01 season he was the top scorer in the Swiss Super League with 21 goals. In 2002 he finally moved to the Young Boys Bern , with whom he was Swiss runner-up in the 2003/04 season. With Bern he was again the top scorer in Switzerland this year with 23 goals.

On May 29, 2005, Chapuisat played his last game for Young Boys Bern against FC Schaffhausen . He scored 1-0 (final score 4-1). For the 2005/06 season he moved despite the announced withdrawal surprisingly to his home club FC Lausanne-Sport in the Challenge League , where he finally almost after last season, in which Lausanne-Sport, thanks to numerous goals from Chapuisat promotion to the Super League managed would have ended his active career for good.

Next to the square

After resigning as an active footballer, Stéphane Chapuisat was appointed FIFA Ambassador for SOS Children's Villages on January 10, 2007 by the SOS Children's Villages Foundation and FIFA . In addition to Kubilay Türkyılmaz , who has been the FIFA / SOS Children's Villages Ambassador since 2001, Chapuisat will also support the concerns of children in need in the future. At the 2008 European Championships , Stéphane Chapuisat was an ambassador at numerous promotional events. He has since ended his position as President of Lausanne-Sport . In 2008 he took over the position of technical director, striker coach and scout for BSC Young Boys . Since 2016 he has also been working as a forward coach for the Swiss Football Association.

Chapuisat plays in the senior team of FC Malley Lausanne . Before the European Championship in 2008, he competed in the Swiss legend team against the celebrities from Der Match and against the Austrian legend team.

Swiss footballer of the year