Guillaume Hoarau (born March 5, 1984 in Saint-Louis , Réunion ) is a French football player who was under contract with BSC Young Boys from August 2014 to August 2020 .

Hoarau began his football career on his home island in the Indian Ocean with Jeunesse sportive Saint-Pierroise . Here the striker drew attention to himself with his many goals in regional competitions. At the age of 19 he relocated to the mother country and signed a contract with the second division club Le Havre AC in January 2004 , which maintains a partnership with the club from the overseas department established by Florent Sinama-Pongolle , who is also from La Réunion .

In Le Havre, he initially hardly got a chance due to difficulties with the climate changeover and the strong competition in the storm of the second division team - a league appearance in the second half of the 2003/04 season and nine games in the 2004/05 season with only one goal. Also in the following season, the 1.92 meter tall striker could not prevail, so that Le HAC loaned him to the league rivals FC Gueugnon during the 2006/07 season . He revived in Burgundy, as he was under much less pressure here than in Le Havre. Also thanks to his eight goals in 21 games for Gueugnon, the club was able to achieve a safe midfield position; Hoarau recommended himself for a regular place after his return, which he also conquered at Le HAC in the 2007/08 season. His breakthrough culminated in the fact that he was voted top scorer of Ligue 2 and the best league player with 28 goals. In addition, Le Havre AC rose to Ligue 1.

The goalscoring qualities had aroused the desires of other clubs from home and abroad; Hoarau ultimately decided to move to Paris Saint-Germain for the 2008/09 season . The winning goal to 1-0 against Girondins Bordeaux was his first goal in the L1 on the second matchday. In total, he scored 17 goals in 33 league games in his first season in the capital and was second on the top scorer list . He also scored three goals in nine UEFA Cup games . In his second season, in which a protracted injury temporarily put him out of action, he scored six goals in 22 appearances in Ligue 1. His most important goal so far was the winning goal in extra time of the cup final , the PSG four years after the last success secured the eighth cup win. In January 2013, Hoarau moved to the Chinese first division club Dalian Aerbin , with whom he signed a three-year contract. In winter 2014 he went back to Ligue 1 for Girondins Bordeaux. His contract, which expired in the summer of 2014, was not renewed in Bordeaux, so he joined BSC Young Boys in August 2014 , where he was able to establish himself as an important scorer thanks to his strength in the ball. On December 12, 2018, Hoarau scored 2 goals in the club's 2-1 victory over Juventus Turin in the Champions League . This was the Young Boys' first victory in the Champions League. 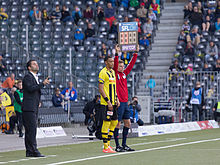 Compulsory game debut for the BSC Young Boys on September 14, 2014

Hoarau was first appointed in March 2009 by Raymond Domenech in the squad of the French national football team, but was not used. After the new national coach Laurent Blanc had renounced all players from the French World Cup squad because of the Knysna fiasco for the international match on August 11, 2010 against Norway , Hoarau was nominated again for the national team. In the 1: 2 defeat he was on the starting line-up and was substituted for Karim Benzema in the 61st minute . He played a total of five international matches until 2011.

From 1971 to 1993 the most successful shooters of the respective second division seasons are given.
Swiss footballer of the year