Map of the Württemberg upper offices, as of 1926

The Oberamt Backnang was an administrative district in Württemberg (on attached map no. 2) , which was renamed District Backnang in 1934 and enlarged in 1938 by parts of the dissolved districts of Marbach and Gaildorf to form the District of Backnang . For general comments on the Württemberg upper offices, see Oberamt (Württemberg) .

As early as the 14th century, the city of Backnang was the capital of a Württemberg bailiwick from which the secular office, from 1758 Oberamt, Backnang emerged. The area around Murrhardt , which was administered as a monastery office since the abolition of the Benedictine monastery there in the 16th century, was also old Württemberg . The administrative reform begun in 1806 merged these two offices as well as the previously Löwenstein area around Sulzbach that had come to Württemberg with the Rhine Confederation Act to form the enlarged Oberamt Backnang. Neighbors of the district, which was assigned to the Neckar District from 1818 to 1924, were, after the reorganization, the Württemberg regional offices of Gaildorf , Welzheim , Waiblingen , Marbach and Weinsberg .

In 1813, after the regional reform was completed, the district was made up of parts that had belonged to the following rulers in 1800:

In 1871 the following communities were subordinate to the Oberamt Backnang. The population numbers broken down by denomination refer to 1867:

Changes in the community since 1813 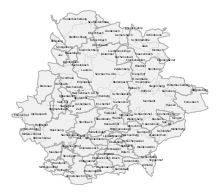 Parishes and marks around 1860

After the constitution of 1819 had prepared the basis for local self-government, the bourgeois communities were constituted in the modern sense. Up to 1828 the following were raised to independent communities: Althütte, Heutensbach, Jux, Neufürstenhütte and Sechselberg.

In 1827 Großhöchberg was incorporated into Spiegelberg.

In 1836 Vorderbüchelberg was incorporated into Spiegelberg.

Around 1858 the Kieselhof was changed from Sulzbach to Murrhardt.

In 1933 the following were changed:

Wikisource: Description of the Oberamt Backnang from 1871  - sources and full texts