from Wikipedia, the free encyclopedia
This is the spotted version , flagged on July 5, 2020 . There are 3 pending changes that have yet to be viewed.

Wagna is a market town with 6196 inhabitants (as of January 1, 2020) in the Leibnitz district in the Austrian state of Styria .

The municipality of Wagna is made up of four cadastral communities (area 2015) and towns of the same name (residents as of January 1, 2020):

In the area populated by Celts, around 15 BC Founded a Roman settlement, which was elevated to a city in 70 AD. The name Flavia Solva contains the name of the city's founder Flavius and the name of the Sulm river - "Solva". Flavia Solva was one of 11 Roman settlements in Austria with city rights and the only one in today's Styria. About 170 n. Chr. Flavia Solva was in Marcomannic war pillaged, then rebuilt and finally in the 5th century in the wake of the Great Migration totally destroyed.

The name Wagna is first found in documents from the 13th century as "Wagnach" = settlement at the river crossing. This should have been located near today's Sulmbrücke. In the 16th century, a noble seat was built on the Aflenzer Sulmbrücke, from which the "Wagna" rule developed. The village of Wagna was under the rule of Seckau and had 196 inhabitants in 1822. In 1848 the manors were dissolved and the political municipality of Wagna was established.

In the First World War one was camp for war refugees and ausgesiedelte civilians . In August 1915 families from Friuli were brought to the camp, which in November 1915 had 21,286 refugees. Almost 3,000 people died in the camp of cholera, typhus and typhus. A separate Italian cemetery was established. After the collapse of the monarchy, this refugee camp became the Wagna settlement.

During the Second World War , a sub-camp of the Mauthausen concentration camp existed in the Aflenz cadastral community from February 1944 to April 1945 . The warehouse served for the underground relocation of the aircraft engine production of Steyr-Daimler-Puch AG from Graz to Aflenz. A total of 920 prisoners were deployed in the Roman limestone quarry for tunnel construction and production. 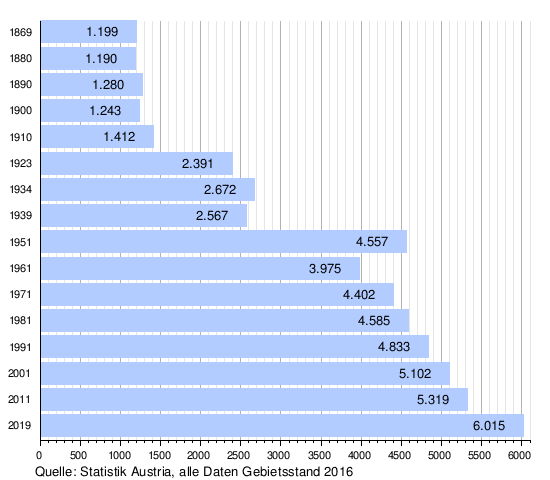 The interior of the parish church

In the area of ​​the former Roman settlement of Flavia Solva, a barrack hospital was built in the 19th century. This was completely destroyed in World War I and rebuilt by the Red Cross in the following years.

In 1936 the Red Cross handed the hospital over to the State of Styria. At that time, it had four departments (surgical, medical, infection and childbirth department with around 100 beds). At the end of the 1950s, the planning and construction of today's hospital began.

Today the hospital is in the middle of a large park and has been a standard hospital of the Styrian Hospital Society since 1986.

Together with Leibnitz, the community forms the tourism association “Die Beste Lagen.Südsteiermark”. Its seat is in Leibnitz.

The coat of arms of the market town of Wagna shows a key, ears of corn and two hands reaching out. The motif comes from a Roman coin and says “that friendship is the key to harvest”.

Cities and municipalities in the Leibnitz district