This article represents the actor; the military of the same name is represented under Hubert von Meyerinck (Lieutenant General) . 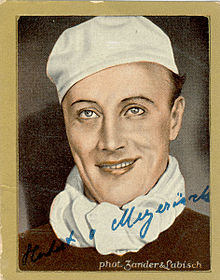 Hubert von Meyerinck (1933), collector's picture from the stage stars series and their autographs , which were enclosed with the Gold Saba cigarettes from the Garbaty cigarette factory in 1933

He was born as the only son of the captain in the Guard Jäger battalion and landowner Friedrich von Meyerinck (1858-1928) and his first wife Caroline (born von Hoppenstedt, 1868-1940). His grandfather was Lieutenant General Hubert von Meyerinck . Since the parents' early divorce (the marriage lasted from 1893 to 1909) he grew up on the family estate in Poznan . He then attended a grammar school in Godesberg and, after graduating from high school, was drafted into military service during the First World War . For a short time he served as a flag junior in Karlsruhe , but a lung disease that resulted in several stays in a sanatorium made him dismissed.

After taking acting lessons with Rudolf Lettinger , he made his theater debut in 1917 at the Berliner Schauspielhaus as Lieutenant von Hagen in Paul Heyses Kolberg . From 1918 to 1920 he had an engagement at the Hamburger Kammerspiele and then returned to Berlin, where he successfully appeared in the avant-garde pieces by Carl Sternheim . He has appeared in various revues and cabarets , including the famous Tingeltangel . He later played at the Deutsches Theater , in the Komödie am Kurfürstendamm (for example in the music revue Es ist in der Luft ) and at the Lessing Theater roles such as The Imaginary Sick , Mackie Messer , Mephisto and the Captain von Köpenick .

In 1920 von Meyerinck was discovered for the silent film . With a bald head, mustache, and often with a monocle, he became a well-known figure in German film. In the later sound film, he brought out his characteristic voice and rasping articulation. He played men with an allure demeanor who often turned out to be impostors or villains. He also appeared in numerous films during the Nazi era . In addition, he was repeatedly seen at the theater in the classic role subject, for example as Mephisto in Goethe's Faust or as Malvolio in Shakespeare's Was ihr wollt .

"Initially, von Meyerinck emphasized the feminine aspect of his appearance. In a Paul Wegener film he danced on the table, dressed in pink ballet panties, his mother's ermine cape and a blue silk cap as headgear. His distinctive homoerotic nuances later served his directors for negative character drawing. He became the most popular film villain in German cinema. "

Meyerinck was homosexual and, according to the memories of his friend and colleague Kurt von Ruffin , who was also homosexual, did not show any great restraint with regard to his inclinations and stood by friends who were at risk.

"Hubert von Meyerinck, my great friend, who was a wonderful colleague, a wonderful man, said (although he was always in danger because he was one of the liveliest): 'I'll accompany you to Alexanderplatz'. At that time the police station was on Alexanderplatz. He really went there with me, which was a noble deed. Afterwards he gave me a beautiful tie that I still have. "

- Kurt von Ruffin : in an interview with Friedrich Kuhn

“I remember a gay actor we called 'Hubsi', Hubert von Meyerinck. He never boasted of himself, but on Kristallnacht he walked down the Kurfürstendamm and shouted: 'Whoever among you is Jewish, follow me.' He hid people in his apartment. Yes, they did exist, the decent people whose words you could believe that it was difficult to become a resistance at that time. People like Meyerinck were wonderful, wonderful. "

- Billy Wilder : in an interview with Der Spiegel , Special from June 1997

In 1950 he moved to Munich , but also played on the stages in Göttingen and Wuppertal .

In 1966 he was given a permanent engagement at the Thalia Theater in Hamburg, where he gave his last performance on March 4, 1971 as Agamemnon in Die Schöne Helena .

In his later years, he was cast in film comedies for bizarre officials, nobles, generals, and devious impostors. Hubert von Meyerinck had his last film successes with the Edgar Wallace films Im Banne des Unheimlichen (1968), The Gorilla of Soho (1968) and The Man with the Glass Eye (1968), in which he played Sir Arthur, the quirky boss of Scotland Yard , embodied. Overall, he worked from 1965 to 1969 in five Wallace film adaptations. By the end of his life, he had more than 275 film appearances. 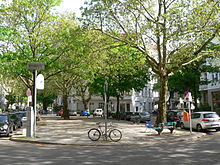 Von Meyerinck knew how to shield his private life from the media. He was called "Hubsi" or "Knurpsi" by friends, family and colleagues. His memoirs appeared in 1967 under the title My Famous Friends , in which he reports about prominent colleagues such as Marlene Dietrich or Adele Sandrock , but also about his beloved mother, with whom he lived in the same household until her death. Hubert von Meyerinck died of heart failure in the Hamburg Bethanien Hospital. His grave is located in the Protestant cemetery of the Schladen community near Goslar .

Berlin honored him in August 1994 with the naming of Meyerinckplatz in Charlottenburg .