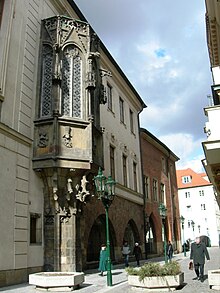 The Collegium Carolinum from the 14th century

The European Credit Transfer System has been implemented at Charles University since 2001 and, in addition to courses in Czech , there are also programs in English and German.

Josef Mathias Trenkwald : Foundation of the University of Prague 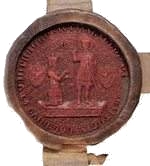 The seal shows Charles IV standing with his coat of arms as Roman King and King of Bohemia and kneeling St. Wenceslaus as the patron saint of Bohemia

Under Emperor Charles IV (Karel IV) and his son Wenceslaus IV (Václav IV), the city of Prague reached a boom in economic, cultural and political terms in the second half of the 14th century. Pope Clement VI granted on January 26, 1347 through a papal bull the privilege of founding a university. On April 7, 1348, Charles IV was founded by a letter of foundation from Charles IV, modeled on the Universitas magistrorum et scholarium in Paris, as "Studium generale" and the first university in Eastern Central Europe ("Alma Mater Carolina"). Charles IV signed this letter of foundation in his capacity as King of Bohemia. In the name of the Holy Roman Empire , he confirmed the privilege with the Eisenach diploma of January 14, 1349.

Monument in honor of Charles IV, the founder of the university, by Ernst Hähnel

Prague University attracted students not only from Bohemia , but also from Saxony , Bavaria , Silesia and the rest of the Holy Roman Empire, as well as from France , England and Italy . It was structured along the lines of the Paris University and taught in the four classical faculties : theology, law, medicine and philosophy. Special subjects that could not be easily inserted into this scheme, such as the disciplines of fine arts , rhetoric or mathematics , were assigned to the philosophical faculty, which was therefore also referred to as the artist faculty . The Magisters and Scholars were assigned to four nations according to their origin : Bohemia, Poland, Bavaria and Saxony. The Nationes are composed as follows:

The first graduation took place in 1359. The Faculty of Law was outsourced in 1372 as an independent university.

With the Kuttenberg decree (Czech decree kutnohorský , after the town of Kuttenberg or Kutná Hora ) of January 18, 1409, the Bohemian King Wenceslaus IV, who had been deposed as Roman king years earlier, changed the voting ratio in the bodies of Charles University in Prague. This step was initiated by Jan Hus , the spokesman for the Bohemian Nation in the university. So if the Nationes of Bohemia, Bavaria, Saxony and Poland each had one vote up to now, the Bohemians now received 3 votes, while the others together only received one. The background was that the cardinals gathered in the Council of Pisa , Gregory XII. and the antipope Benedict XIII. wanted to depose and wooed the support of the King of Bohemia. But this decided, until the final decision of the council, to be neutral towards both popes. In May 1409, many of the German students and professors left Charles University in Prague. About 1000 students and professors went to Leipzig and founded the University of Leipzig there . The German-speaking teachers Peter von Dresden , Nikolaus and Friedrich von Dresden, who were supporters of the Hussites , took over the Dresden Cross School .

The Hussites were now the Pope and the Council of Constance to heretics declared. The University of Prague, however, officially adopted the Hussite creed in 1417. In the course of the 15th century, this led to the university being largely isolated from the rest of the European university landscape and its importance declined. From then on, Bohemian Utraquists studied and taught in Prague .

The artist faculty became a center for the Hussites and an ideological center for the Utraquists . Graduations could not be made in 1417–1430, and at times there were just eight or nine professors.

Their teachers helped formulate the Prague Articles, but after the death of Johann von Seelau (1422), Masters were arrested and banned, colleges and churches were destroyed. The situation did not calm down until 1431, but graduations did not take place again until 1440, and at that time there was not a single master's degree in theology or law. The mutual interest in a reconciliation with the Pope led to the papal recognition of the lay chalice in Bohemia and Moravia in 1447 - and to the resumption of teaching. But as early as 1448, when Prague was conquered by the party of George of Podebrady, new quarrel broke out and because teachers and students had to swear to keep the compacts, most foreigners and a number of local teachers and students left the university. The university then limited itself to the artist faculty and almost merged with the "Lower Consistory", an episcopal chancellery similar to that.

The university and its colleges had lost most of their assets during the Hussite Wars , and in the 15th century, although several estates and villages were regained in 1471–1526, all students came from the utraquist regions of Bohemia; neither from other countries, nor even from Moravia. After 1500 the voices criticizing the deplorable state of the university education became louder: The pastor of the Teynkirche Jakob calls the Charles University “a rusty jewel” and most talented young people still stayed away from it to study elsewhere. The conservative university opposed the Catholic rulers, it received support only from the bourgeoisie, but was very dependent on the political upheavals in the town halls. Together with the “rebellious” cities, the university was punished by Ferdinand I even after 1547 .

In 1556 the Jesuits came to Prague at the invitation of the Roman-German and Bohemian King Ferdinand I (Emperor from 1558) and founded a philosophical-theological college at the Clementinum , which also had the right to obtain a doctorate. In 1609 a reform came about through the majesty of Emperor Rudolf II . The Catholic Clementinum acted as a strong competitor to the utraquist university and was elevated to a Catholic university in 1616.

In 1618 the Utraquist University took an active part in the bohemian uprising against the Catholic Habsburgs. After the defeat of the estates, the university lost its autonomy, was handed over to the Jesuits and re-Catholicized.

In 1638 the medical and law faculties were established. Emperor Ferdinand III. in 1654 united the Clementinum with the Charles University. From then until the end of the Habsburg Monarchy in 1918, the university was called Universitas Carolo-Ferdinandea . In 1718 the baroque reconstruction of the Karolinum and in 1724 the astronomical tower , mirror chapel and library room at the Clementinum were completed, under the direction of Franz Maximilian Kaňka .

After the abolition of the Jesuit order, the university became a state institution in 1773. A far-reaching university reform began in 1781 under Emperor Josef II. For the first time since 1622, non-Catholics were allowed to study again. In 1784 the university's own jurisdiction was abolished and German was declared the main language of instruction, although some lectures continued to be given in Latin and some in Czech.

In the course of the revolution of 1848/1849 in the Austrian Empire , the Whitsun uprising in Prague took place . Both German and Czech students and professors took part in the protests. In addition to demands for freedom of research and teaching, the proportion of courses in the Czech language should be increased.

Around 1860, only about a third of Prague's residents spoke German as their mother tongue. In contrast, only about 1% of the courses at Prague University were held in the Czech language. Due to protests, the university was divided by law of February 28, 1882, making it practically two universities:

These represented institutions that were independent of each other, with medical and scientific facilities, the botanical garden and the library being used jointly, which, however, like the medieval insignia, remained in the administration of the German part of the university.

After the dissolution of the Habsburg monarchy Austria-Hungary and the establishment of the Czechoslovak Republic (ČSR) , the “Law on the Relationship between Prague Universities” (Zákon č. 135/1920 Sb. Z. A n., O poměru pražských universit) decided. Through this so-called "Lex Mareš", named after František Mareš , the Czech university was declared the sole legal successor of Charles University and renamed "Univerzita Karlova", renouncing the name of the Habsburg Emperor Ferdinand. The German university, on the other hand, stuck to the name "Karl Ferdinand University". Since the Czech Charles University was designated as the legal successor to the old medieval university, but the medieval insignia remained with the German Karl Ferdinand University, the so-called insignia dispute (Insigniáda) occurred in 1934 .

After the " smashing of the rest of Czechia " and the establishment of the Protectorate of Bohemia and Moravia , the German university was taken over into the Reich administration on August 2, 1939 and renamed the "German Charles University in Prague". After student uprisings, Charles University in the Czech Republic was closed for an initial three years in November 1939. As part of the so-called special action in Prague , nine alleged "ringleaders" were shot dead, several hundred students and 55 professors and lecturers were deported to concentration camps. Some of the Czech students graduated from the University of Oxford .

After the Second World War (1945 to the present day)

When, if not now?
Who, if not we?
On November 17, 1989, on the occasion of the 50th anniversary of the closure of Czech universities in 1939, an approved student demonstration took place in which, according to state security, 15,000 people took part and which was then forcibly disbanded by security forces.

Decree No. 122 of the Czechoslovak President Edvard Beneš of October 18, 1945, decreed the dissolution of the German University in Prague, retroactively to November 17, 1939, the day the Czech university was closed. As part of the takeover by the communists academic freedom has been tweaked and redesigned the University of the Soviet model. This also had an impact on international relations and research opportunities. Nevertheless, research results could be achieved at a high level. A notable example is the research of Jaroslav Heyrovský , who received the Nobel Prize in 1959 for his development of polarography .

A wave of repression against teachers and students from 1969 onwards resulted from the involvement of university members in the events of the Prague Spring . The Velvet Revolution on November 17, 1989, on the other hand, was not only an important event for Czech society as a whole, but the end of state socialism also gave the university a new boost. Far-reaching reforms have started.

As a result of the Bologna Declaration , Charles University in Prague introduced new degrees in 2001 and implemented the European Credit Transfer System . Currently (as of 2015) 270 different degrees can be achieved in the 17 faculties. It is taught in the Czech language; programs are increasingly being offered in English and German.

Since September 2016, Charles University has had her name without a name extension.

The university is spread over the entire urban area of ​​Prague. Other locations are in Hradec Králové and Plzeň . The historical core from the 14th century - the Karolinum, is located in Prague's old town and is also the center of university life. Here is the seat of the Rector and the Senate . Official academic ceremonies such as matriculation and graduation ceremonies are also held here .

The 17 faculties of the Charles University are divided as follows:

Blackboard at the Institute for Languages ​​and Technical Training (UJOP)

With five medical faculties, Charles University is the largest medical educational institution in the Czech Republic. Seven university clinics are attached to the faculties . Five of these clinics are used by the three Prague faculties and one each by the faculties in Pilsen and Hradec Králové .

Five other clinics are located at the Prague Military Central Hospital (Ústřední vojenská nemocnice Praha) . Other medical institutions in Prague are also involved in university medicine.

Since 2004 there has been a cooperation agreement between the 1st Medical Faculty of the Charles University and the Chemnitz Clinic for cooperation on the international course in human medicine.

→ Main article : List of rectors of Charles University in Prague

Asteroids (2288) Karolinum and (4339) Almamater were named after the university .

Public universities in the Czech Republic