Lammershagen is located on the southern shore of Lake Selenter , the second largest lake in Schleswig-Holstein after the Great Lake Plön , and on the federal road 202 from Kiel to Lütjenburg . 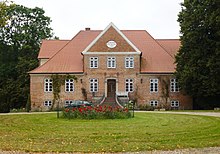 The Lammershagen estate , which gave the place its name, was owned by the Split family in the Middle Ages . The well-preserved gatehouse dates from 1743 and was probably built by the builder Rudolph Matthias Dallin . In the middle of the 18th century a mansion and a monumental stable building were added when Heinrich Christoph Graf von Baudissin was the owner.

During the Second World War, Bellin was home to a sea ​​air base , which was accessible to traffic by the then existing Kirchbarkau – Preetz – Lütjenburg railway. After the Second World War, the air base , which largely consisted of RAD barracks, was used as a refugee camp, which housed around 400 refugees, mainly from Pomerania, Brandenburg, Silesia, and West and East Prussia.

Of the nine seats in the municipal council who since the municipal election 2018 SPD five seats and the voter community FWL 4 seats.

Blazon : “Divided by blue and silver by five battlements. Above a silver fish (whitefish), below a red wicker fence. "

The community is predominantly agricultural. The fishing of the Selenter See is largely carried out by the fishery in Bellin. Because of its great depth, the rare and much sought-after large and small vendace occurs in Lake Selent, fishing for whitefish has always been of great importance to the Belliner fishery. The vendace is sold all the way to Berlin, especially in smoked form.

Municipalities in the Plön district