Stolpe is a municipality in the Plön district in Schleswig-Holstein . The Depenau, Nettelau, Bundhorst and Horst estates are located in the municipality, which has existed in its current form since 1974.

Stolpe is about 16 km east of Neumünster , 22 km south of Kiel and 20 km west of Plön . Stolpe is located on the Stolper See , which is partially owned by the municipality and through which the Alte Schwentine flows. The place is on the federal highway 21 from Kiel to Bad Segeberg . Stolpe can be reached by bus with the VKP line 410 between Kiel and Bad Segeberg. From 1911 to 1961, Stolpe was the station of the Kleinbahn Kiel – Segeberg , whose tracks were removed in 1962.

Archaeological finds show that the area around Stolpe has been inhabited since the Mesolithic .

The name is possibly derived from the old Slavic word stlŭpŭ for column or stand , i.e. from the fish stand in the river, a device for fishing. Other sources derive the word “place protected by palisades”.

The place was in the area of ​​the Limes Saxoniae , the border strip of the Saxons to protect against the Abodrites in eastern Schleswig-Holstein, which was built around 810. Stolpe was first mentioned in a document on February 6, 1316. Until 1815, Stolpe was owned by the Depenau estate.

There is evidence that six people from Depenau were accused of witchcraft and sorcery in the witch hunts from 1678 to 1687 and were executed after witch trials .

In 1835 two small golden bowls with lids were found by chance under a boulder near Stolpe. One contained a gold bracelet. The find is now kept in the State Museum Schloss Gottorf in Schleswig .

On the southeastern edge of the Depenau high moor there is a heaped up hill that is believed to be the location of an earlier tower hill castle . The lands later belonged to Gut Perdoel (now a part of Belau ) and from 1551 onwards they formed a separate estate from Depenau, which was owned by the von Sehestedt family until 1620 . By marriage it passed to the von Brockdorff on Gut Rixdorf . Anna Constantia von Brockdorff was born here in 1680, who became Augustus the Strong's mistress from 1705 and carried the title of Countess von Cosel from 1706 . After the death of her brother she inherited the estate in 1744. Her daughter-in-law Friederike Christiane Countess Cosel, b. von Holtzendorff, sold Gut Depenau in 1783 to the French marshal Count Nikolaus von Luckner . Adam Ferdinand von Luckner sold the property in 1838 to the Kiel merchant Georg Eduard Boehme. It was acquired by Gustav von Löbbecke in 1890 and in 1904 by the secret councilor Rudolf Hammerschmidt from Essen, who had lived in the Villa Hammerschmidt in Bonn since 1899 . The old mansion he converted was demolished in 1979. The residence of the current owners, the Monforts von Hobe, is a centuries-old half-timbered house on the estate. 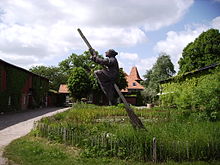 Inner courtyard of the herb park in Stolpe

Of the thirteen seats in the municipal council who since the local elections in 2013 CDU six that Wählergemeinschaft WGS four and the Greens three seats.

Blazon : “Divided diagonally to the left by a silver bar of blue and red. Above, two golden prehistoric bowls in side view, one below the other, the upper one slightly larger than the lower; below the silver holstein nettle leaf. "

The two bowls show the above-mentioned finds from 1835. The sloping bar represents the division of the place by the Autobahn 21. The colors symbolize the affiliation to Schleswig-Holstein and the nettle leaf the location in the Holstein region.

The community was dominated by agriculture until the 1970s. Even today, a courtyard in the local area and several courtyards outside are managed. Due to its central location in the city triangle of Kiel, Neumünster and Plön, the population has increased to around 1300. Most of the Stolper citizens commute to work in the region. In the 1990s, Stolpe established an industrial park on Autobahn 21. This is where the Stolpe road maintenance depot is located. You can also find several craft businesses and various service providers in Stolpe.

A tourist attraction is the herb - Museum with the herbal park and the café re-nature.

Anna Constantia Countess of Cosel , b. from Brockdorff-Depenau (1705)

Municipalities in the Plön district