This is a list of the main sagas and myths of Greek mythology .

The most widespread story of creation is Hesiod's theogony , in which the first attempt was made to create a comprehensive genealogy of the gods from various myths.

Another myth of origin that has found a certain spread is the story of the creation of the Orphics, the Orphic theogony .

The generations of gods

Rebellion of the titan Kronos against his father Uranus 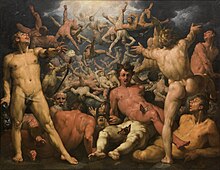 The Titan Kronos emasculates his father Uranos at the instigation of his mother Gaia and frees his siblings.

Revolt of the titan son Zeus against his father Kronos

To prevent him from being overthrown by one of his sons, as predicted, the Titan Kronos devours all of the children born to him by his wife Rhea . Only Zeus can hide Rhea from her husband by handing him a stone tied in bloody diapers in place of the son. The grown-up Zeus then actually challenges his father and wins. The fight of the Titan son Zeus against his father Kronos is known as Titanomachy (Titan Battle). Zeus was supported by the Cyclops , from whom he also received thunder and lightning, the Hekatoncheirs , Styx and his mother Rhea. Kronos was supported by some other titans, namely Iapetos and Koios , who were banished to Tartaros with Kronos after the fall of Kronos by Zeus . Since Okeanos , Tethys and Themis did not take part in the fight against Zeus, Zeus let them rule over their ancestral realms.

The fight of Zeus, his siblings and allies against the giants sent by Gaia to defend the titans, their children, is called Gigantomachie (gigantic battle ). In doing so, they receive particular help from the mortal son of Zeus, Heracles, who later also admitted to Olympus and becomes the husband of Hebe , who was replaced by Ganymede in her function as cupbearer of the nectar food of the gods . But Zeus was victorious in these battles too, and he and his brothers were able to rule. By lot, he had “the sky” , Poseidon “the sea” and Hades “the underworld” .

Ultimately, the Olympians must prevail against the Typhon sent by Gaia . When he rose up into the sky throwing glowing stones and roaring in a deafening manner, the Olympians turned in horror to flee. Thereupon they turned into animals: Zeus into a ram, Apollo into a raven, Dionysus into a billy goat, Artemis into a cat, Hera into a cow, Aphrodite into a fish and the Eos into an ibis. Ares, too, was transformed into a fish, the mighty Heracles into a deer, Leto into a weasel, and Hephaestus into a bull. And so they fled to Egypt, the ancient land of wisdom, before Zeus could tame Typhon.

The legends of the Olympians

The early legends of mankind

The great cycles of Greek sagas

A. The life of Heracles himself

B. The Life of the Sons of Heracles ( Herakleiden )

The Argonauts' search for the golden fleece .

Troy and the Trojan War

The adventures of Odysseus on his way home from Troy and back in Ithaca .

The fate of Agamemnon after his return from Troy and his avenging son Orestes.

The adventures of Aeneas on his flight from Troy and into Italy.

The legends of the Greek landscapes