This article describes the church. For the district see Kaliště u Humpolce .

Podivice (German Podiwitz , formerly Podiewitz ) is a municipality in the Czech Republic . It is located ten kilometers north of Vyškov and belongs to the Okres Vyškov .

Podivice is located eight kilometers west of the geographical center of Moravia, the summit Předina (312 m), in the eastern part of the Drahan mountainous region . The municipality forms an enclave in the area of ​​the Březina military training area . To the east is the valley of the Ferdinandský creek, which joins the Pulkava or Hraniční potok to the north-east of the village to form the Brodečka river. In the north rise the Mravenečný (410 m) and the Perná (396 m), northeast the U Chaloupky (413 m), southeast the Vojenská (442 m). in the southwest of the Věsperk ( Wiesberg , 457 m) and Srnčí ( Rehberg , 537 m) and in the northwest of the Stříbrná ( Silberberg , 551 m). To the north lies the Brodečka drinking water reservoir on the Pulkava. The Pulkava forms the historical border between the Vyškov and Prostějov districts . 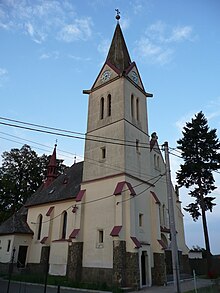 Church of St. Cyril and Method

The village was first mentioned in writing in 1143 as the property of the Olomouc bishopric . The original name Poděvice derives from the pagan goddess Poděva, whose place of worship was on Na Valech square in the woods on Dudín. From 1465 belonged to the smaller estates of the diocese. The bishops used the surrounding large forests to hunt fallow deer, and silver ore was mined on the Silberberg. The first fallow deer enclosure in the Kingdom of Bohemia was built below the Silberberg in the 15th century. In 1755, Bishop Ferdinand Julius von Troyer had the Ferdinandsruhe hunting lodge in the woods west of Podiwitz with one dedicated to St. Create a chapel dedicated to Eustachius. In 1836 16 people died when cholera broke out. The village school was inaugurated in 1838.

After the abolition of patrimonial Podivice formed with the district Skotačky from 1850 a municipality in the district administration Wischau . In 1862 a major fire destroyed the entire village. Because of the increasing number of children to be taught, a new school building was built in 1882. Since 1891, funds have been collected for a church building that was finally built between 1910 and 1911. In 1927 the volunteer fire brigade was founded . In 1935 the municipality acquired the surrounding 3697 hectares of forest, making it one of the largest in terms of area in Moravia. During the German occupation in 1940, the decision was made to expand the Wischau firing range into a large military training area for the Wehrmacht . Podiwitz was one of the 33 villages to be evacuated for the construction of the Wischau military training area , out of a total of 43 in all of Moravia, in the first stage to be completed by October 31, 1941. At that time, 333 people lived in the community's 103 houses. After the end of the Second World War, the community was repopulated from June 1945. 239 of the expellees returned to their dilapidated houses after the end of the war, the others moved to the border areas . At the beginning of 1946 the Podivice commune was officially re-established. On May 1, 1951, the Březina military training area was established, and the local national committee sold the forests belonging to the municipality to the state. This reduced the cadastre to 225.30 hectares and Podivice became one of the smallest municipalities in Moravia. In 1977 classes in Podivice were discontinued and the school location has been Pustiměř ever since. 1986 Podivice was incorporated into Pustiměř, since 1990 the community exists again. 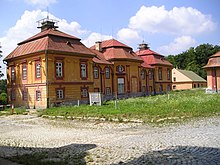