Lysovice (German Lissowitz ) is a municipality in the Czech Republic . It is located seven kilometers south of Vyškov and belongs to the Okres Vyškov . Because of the preserved historical building fabric, Lysovice was declared a rural monument area ( Vesnická památková zóna ).

The street village Lysovice extends in the western foothills of the Litenčické vrchy in the valley basin of the brook Lysovický potok. To the north is the Rostěnický potok valley. The Malý Povětrník (316 m) rises to the southeast, the Větrník ( Windberg , 394 m) and Lysovický kopec (323 m) to the south and the Špice (302 m) to the west. The village is surrounded by numerous avenues .

Church of the Sacred Heart

The first written mention of Lissiwicz took place in 1465 in connection with the performance of contributions in kind to the diocese of Olomouc . The village, which consists of 32 properties, has been the property of the Dominican convent of St. Katharina in Olomouc since 1519 ; However, it is assumed that the village belonged to the monastery even before the introduction of the Moravian land table and was founded by the Lords of Obřany at the end of the 13th century during the German colonization of the Wischauer Land . The names of the residents in the tax books suggest that the place was settled by Germans in the 16th century. Dominik Andreas I. von Kaunitz bought Lissowitz in 1685 from the Dominicans and connected the goods to his Austerlitz rule . In 1718 Lissowitz consisted of 43 properties. In 1775 there were 44 farms of various sizes and seven kötter in the village. In 1822 the village had grown to 54 farms, of which 44 were farmers and eight kötter. In comparison to the surrounding towns, Lissowitz was a poor village and its residents earned extra income from haulage services. In 1834 381 people lived in the 58 houses in Lissowitz. A single-class German school had existed since 1846. The chapel of the Virgin Mary was at the upper end of the village.

After the abolition of patrimonial Lissowitz / Lesovice formed from 1850 a community in the district administration Wischau . In 1880 Lissowitz consisted of 81 houses and had 397 inhabitants, of which 379 were Germans and 18 Czechs. At that time the Czech place name Lisovice was used, the current spelling Lysovice was introduced in 1924. The volunteer fire brigade was founded in 1880. In 1900, 420 people lived in the 88 houses in the village, all of whom belonged to the German ethnic group. In 1918 the German community school was relocated from Wischau to Lissowitz. Together with seven other villages, Lissowitz formed the Wischau language island . The church was built between 1923 and 1924 at the lower end of the village. In the 1929 elections, the German Christian Social People's Party received 123 of 289 votes. In 1930 the village had 438 inhabitants. In 1935, 119 out of 287 voters in Lissowitz voted for the Sudeten German Party . On April 20, 1945 the village was bombed during a Soviet air raid on the Wischau military training area . After the end of the Second World War, a Czech village school was established in Lysovice in 1945 and a kindergarten in 1946. The German population was expelled in 1946 and the place was repopulated with Czechs from the Drahaner Bergland , whose houses had become uninhabitable due to the Wischau military training area. In 1947 Lysovice had 477 inhabitants. Between 1986 and 1990 the village was incorporated into Vyškov . Lysovice is parish after Kučerov .

No districts are shown for the municipality of Lysovice. 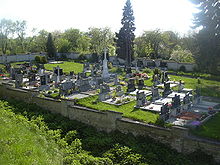 Crossroads on the dirt road to Kučerov