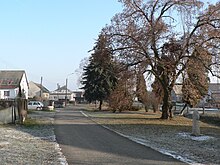 Rájec (German Großrasel ) is a municipality in the Czech Republic . It is located three kilometers southeast of Zábřeh and belongs to the Okres Šumperk .

Rájec is located on the Rájecký potok brook on the northeastern slope of the Mirovská vrchovina ( Mürauer Uplands ) to the Mohelnická brázda ( Müglitzer Furche ). The village lies on the right side of the Moravská Sázava immediately before its confluence with the March . The place is bypassed in the east by the state road 44 between Zábřeh and Mohelnice and the railway line from Olomouc to Zábřeh. The nearest train station is Zábřeh. The hill Hlína (335 m) rises to the south.

According to archaeological finds, there was a settlement site of the Lusatian culture in the corridors of the community . The first written mention of Rájec took place in 1273 in a document issued by the Diocese of Olomouc for the Müglitz judge . The place was given to a lower landed gentry as an episcopal fief in 1320 along with other villages. Subsequently, various small noble families changed as owners of the farm and village, some of which acquired the title of Rájec . In 1408 the episcopal feudal administration was relocated from Müglitz to Mürau Castle . Since the middle of the 15th century there is evidence of a festival in Rájec. The man's back Rájec at that time included the villages Rájec, Ráječek, Jestřebí, Lupěné and Javoří.

During the fighting between Matthias Corvinus and Georg von Podiebrad for the Bohemian Crown , there was a battle between Bohemian and Hungarian troops from September 30th to October 1st, 1468 between Rájec and Zvole . The Hungarians from Olomouc , who were under the command of the Silesian knight Franz von Hag ( František z Háje ), attacked the Bohemians' night camp at Zvole. The next day, the Bohemians were attacked and surrounded by the Rájec fortress on the only open retreat route to Zábřeh . About 600 men died in the bitter fighting on the Bohemian side, some of them drowned in the Moravská Sázava . The Bohemian military leader Zdeněk Kostka von Postupitz was mortally wounded , probably by Johann von Würben , and was brought to the Zábřeh Castle, where he died.

In 1564, the Olomouc bishop Markus Kuen bought back Rájec, which had been pledged in the meantime, and added it to the rule of Mürau. Later, Rájec was temporarily given back as a pledge. During the Thirty Years' War the Swedes devastated the courtyard, the fortress was already extinguished by this time. In the hoof register of 1677 27 properties are shown for Rájec, three of which were in desolation. In the vicinity of the village there were three fish ponds, these were drained in the 19th century. In 1787 the farm Rájec was parceled out and along the road to Müglitz the settlement Theodorow , which adjoins Groß Raasel to the south and named after Archbishop Anton Theodor von Colloredo-Waldsee-Mels , was laid out. After 1800 the mining of iron ore began in the vicinity of the place. A village school was set up in Groß Raasel in 1820. In 1834 Theodorow had 320 inhabitants and consisted of 55 houses; in Groß Raasel there were 51 houses with 318 residents.

After the abolition of patrimonial formed Rájec / United Rasel in 1850 with the hamlet Theodorov a municipality in the district of High City . Between 1867 and 1923 Theodorov formed its own political community and was then rejoined to Rájec. In 1900 Rájec consisted of 58 houses and had 309 inhabitants. At the same time, 287 people lived in Theodorov's 54 houses. In 1930 the municipality of Rájec had 613 inhabitants, including 612 Czechs and one German.

After the Munich Agreement , Großrasel was annexed to the German Reich in 1938 and belonged to the Hohenstadt district until 1945 . In 1939 there were 588 people in the community.

In 1950 Rájec had 505 inhabitants and consisted of 122 houses. At the end of 1960 the Okres Zábřeh was dissolved and the municipality was assigned to the Okres Šumperk. In 1991 the place consisted of 124 residential buildings with 453 residents. The community has a coat of arms.