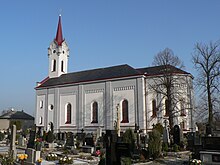 Church of the Immaculate Conception of the Virgin Mary

Zvole (German Schmole ) is a municipality in the Czech Republic . It is located six kilometers southeast of Zábřeh and belongs to the Okres Šumperk .

The village was first mentioned in writing in 1273 in a document issued by the Diocese of Olomouc for the Müglitz judge . The place, together with other villages, was given to a lower land nobility as an episcopal fief. The existence of the subsidiary church of St. Giles has been documented since 1275. The Vladiken von Zvole also owned the surrounding feudal estates and were given the office of Bailiff of Mürau in the middle of the 14th century after the episcopal feudal administration was moved from Müglitz to Mürau Castle .

The church was destroyed during the Hussite Wars and rebuilt in 1444. In the 15th century the Zvolský von Zvole acquired further feudal estates. This included Goldenstein in 1437 , after whom the line was named as von Zwole and Goldenstein . During this time there were armed conflicts between the Catholic lords of Zwole and their neighbors, the Hussite Tunkl from Brníčko on Zábřeh . A brewery and mill belonged to Feste Zvole. There was also a parish and a school in the village.

During the fighting between Matthias Corvinus and Georg von Podiebrad for the Bohemian Crown , there was a battle between Bohemian and Hungarian troops from September 30th to October 1st, 1468 between Rájec and Zvole. The Hungarians from Olomouc , who were under the command of the Silesian knight Franz von Hag ( František z Háje ), attacked the Bohemians' night camp at Zvole. The next day, the Bohemians were attacked and surrounded by the Rájec fortress on the only open retreat route to Zábřeh . About 600 men died in the bitter fighting on the Bohemian side, some of them drowned in Moravská Sázava . The Bohemian military leader Zdeněk Kostka von Postupitz was mortally wounded , probably by Johann von Würben , and was brought to the Zábřeh Castle, where he died.

In 1500 the lords of Zierotin acquired Zvole along with six other villages. After the bishopric of Olomouc bought back the goods in 1561, they were attached to the rule of Mürau. The fortress lost its function and in the 17th century it was converted into a granary and hegery house. During the Thirty Years War, the village was burned down by Swedish troops. The hoof register of 1677 shows 35 farmed properties and four deserts for Zvole; the brewery no longer existed. In 1787 the Zvole farm was parceled out and the Kolloredo settlement, named after Archbishop Anton Theodor von Colloredo-Waldsee-Mels , was built on the southwestern edge of the village. Kolloredo consisted of two long rows of houses on either side of a street. After 1800 the mining of iron ore began in the vicinity of the place. In 1834 554 people lived in the 77 houses of Zvole; in Kolloredo there were 60 houses with 409 residents.

After the abolition of patrimonial , Zvole / Schmole and the district of Kolloredo / Kolorédov formed a community in the Hohenstadt district from 1850 . In 1854 the church burned down. Kolloredo formed its own political municipality from 1869. In 1876 the Czech volunteer fire brigade Zvole was founded. In 1884 two schools started teaching in Zvole and Kolloredo. The one in Kolloredo was a German school; in Zvole, classes were initially given in Czech and German. Since the Germans finally all registered their children in Kolloredo, the school in Zvole became a purely Czech one. In 1900 there were 84 houses in Zvole with 590 residents, 46 of them Germans. 395 people lived in the 63 houses of Kolloredo, 189 of them Czechs. In 1918 the German school in Kolloredo was closed and since 1919 the village has been part of Zvole again.

In 1930 the community had 938 inhabitants, 824 of them Czechs and 113 Germans. After the Munich Agreement , the place was annexed to the German Reich in 1938 and belonged to the Hohenstadt district until 1945 . During the occupation, only the German minority was promoted. In 1939, 965 people lived in Schmole. After the end of the Second World War , the German minority was expelled . As a result, the number of residents decreased and in 1950 there were 750 people living in the 170 houses. At the end of 1960 the Okres Zábřeh was dissolved and the municipality was assigned to the Okres Šumperk. In 1991 the place consisted of 192 residential buildings with 704 residents.