This article describes the church. For the desertification see Boletice Training Area .

Hořičky (German Horschitzka , also Kleinhorschitz ) is a municipality in the Czech Republic . It is located 13 kilometers east of Dvůr Králové nad Labem and belongs to the Okres Náchod .

Hořičky is located southeast of the Kingdom Forest on the left side above the valley of the Válovický creek . 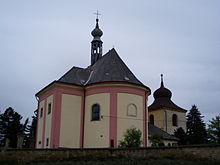 Hořičky was first mentioned in 1357 as the property of the knight Ludger von Hořiček. Another mention was made in 1359, when the then Chwalkowitz pastor Jan was appointed pastor of Hořičky. The goods in Hořičky were attached to the Litoboř estate at the beginning of the 15th century . They then became part of the Riesenburg rule and, at the end of the 16th century, the Nachod rule .

The parish village of Hořičky formed the center for the surrounding small villages and a parish school existed since the 17th century. From 1714 a new church was built, which became the goal of a two-day pilgrimage to the Holy Spirit every year. During the 19th century, Hořičky became a popular summer resort. The alternative practitioner Antonín Pich successfully treated fractures.

After the abolition of patrimonial Hořičky formed a municipality in the Nové Město nad Metují district from 1850. At the end of the 19th century a five-class school was established. At that time, Hořičky came to the Náchod district. In the sanatoriums of the doctors Alois Kutík and Kašpar Rosa, bone and joint ailments were cured at the beginning of the 20th century. In 1920 a citizen school opened. There were also shops that lived primarily from the spa business. In Hořičky there was a post office and a gendarmerie station.

Cities and towns in Okres Náchod