Otovice ( German  Ottendorf ) is a municipality in the Czech Republic . It is located four kilometers southeast of Broumov on the border with Poland and belongs to the Okres Náchod .

The Waldhufendorf extends over four kilometers in the wide valley on both sides of the Steine river . To the north rises the Černý vrch ( Schwarzberg , 437 m) and to the east the Otovický vrch (424 m), over which the border runs. The Przepiórka (490 m) is already on Polish territory in the southeast. Otovice was the terminus of the railway line from Meziměstí and had two stations with Otovice and the terminus Otovice zastávka . However , traffic on the section between Broumov and Otovice was stopped in 2005. After Tłumaczów in Poland there is a road link. There is a sports airfield east of Otovice. 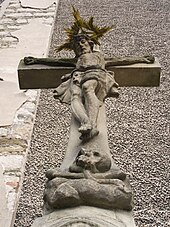 Cross on the church

In the course of the reclamation of the area by the Břevnov monastery , the place was created around 1253 by German colonists along the stones. There was already a Slavic fortress on the Hoprich hill above the confluence of Martínkovský potok with the stones.

The village, named after its locator Otto, was first mentioned in records in 1300. Ottendorf was one of the villages belonging to Broumov Abbey .

In 1724 the church was built, which was a branch of Märzdorf . In 1789 the village school started teaching. After the abolition of patrimonial Ottendorf formed with the hamlet Lederhose from 1850 a community in the judicial district of Braunau or in the later district of Braunau . In 1885, 1,155 people lived in the community. With the extension of the railway between Halbstadt and Braunau to Mittelsteine in Silesia , Ottendorf received a railway connection on April 5, 1889. The residents of Ottendorf lived from agriculture. A limestone quarry was operated in Lederhose. Otherwise there was still a brick factory. After the Munich Agreement in 1938, Ottendorf, which was mostly inhabited by Germans, was added to the German Reich and until 1945 belonged to the Braunau district . In 1945 and 1946 the German residents were expelled. In 1945 the railway connection in Polish Tłumaczów ( Tuntschendorf ) was set, so that the trains ended in Otovice zastávka. In the course of the dissolution of the Okres Broumov, Otovice was assigned to the Okres Náchod in 1961. On June 18, 1979, a flood of stones flooded the village. On July 7, 1997, the village was hit by another severe flood. The České dráhy stopped the train service on December 11, 2005 on the section between Broumov and Otovice.

Cities and towns in Okres Náchod