The title of this article is ambiguous. Further meanings are listed under Bollendorf (disambiguation) .

Bollendorf in the valley of the Sauer

Bollendorf is located in the German-Luxembourg Nature Park , right on the border with Luxembourg . The Sauer is the border river between the two states. In Bollendorf there is a border crossing to Bollendorferbrück / Bollendorf-Pont (municipality of Berdorf ).

View over Bollendorf, Bollendorf-Pont and the Sauer

Between the end of the 18th century and the end of the Second World War , large parts of the able-bodied population were employed in the nearby Weilerbach in connection with iron mining, smelting and processing. After the hut was closed, many residents became commuters to Luxembourg. Today tourism is the main source of income for the residents.

The development of the population of Bollendorf, the values ​​from 1871 to 1987 are based on censuses:

The municipal council in Bollendorf consists of 16 council members, who were elected in the local elections on May 26, 2019Template: future / in 3 years in a personalized proportional representation, and the honorary local mayor as chairman. In 2009 there was a majority election. 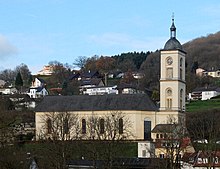