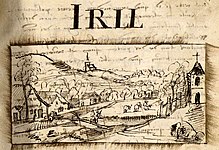 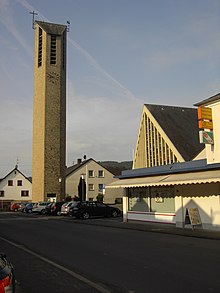 Irrel ( dialect Eardel ) in the western Eifel is a municipality in the Eifelkreis Bitburg-Prüm in Rhineland-Palatinate . It has been a member of the Südeifel community since July 1, 2014 . Until then, Irrel was the administrative seat of the disbanded community of Irrel .

Irrel is a state-approved climatic health resort and designated as a basic center according to state planning .

Irrel is located in the Südeifel Nature Park on the Prüm on the southeastern edge of the Ferschweiler plateau . Below Irrel, the Nims flows into the Prüm.

The first written mention of the place Irrel dates back to the year 714. In the deed of donation of a mill and 7½ mansion land (approx. 750 hectares) to St. Willibrord the place is called "Alder". As a result, the place belonged to the Duchy of Luxembourg as the property of the Echternach Abbey , thus since 1555 to the Spanish Netherlands and from 1714 to the Austrian Netherlands . From 1795 to 1814 Irrel was part of the French Forests Department , after the Congress of Vienna the nearby Sauer river became the border river of the newly established Grand Duchy of Luxembourg , and Irrel became Prussian . In the 19th century, agriculture and forestry, the extraction of tanneries and the quarries in the area gained in importance. However, the area was characterized by poverty until well after the Second World War , due to the sparse settlement, moderately fertile soil and low industrial development, but also the peripheral location on the western border that emerged in 1815.

At the beginning of the 20th century, the establishment of a savings and loan fund (founded in 1900 by the then Catholic pastor Follert, still existing today as "Raiffeisenbank Irrel eG", the smallest cooperative bank in the Eifel region) promoted that of a dairy cooperative in the twenties ( founded in 1929 by the then Catholic pastor Ewerhart) the economic development. With the construction of the Nims-Sauertalbahn in 1912 in the direction of Bitburg-Erdorf and in 1915 in the direction of Trier, the railway network opened up, which gave the entire region a certain economic upturn. During this time, Irrel was mainly influenced by agriculture and handicrafts. Passenger traffic on this route was discontinued in 1968 and freight traffic in 1988. The railway made it possible for the first time to export the typical products of the region, agricultural products, wood and sandstone, on a larger scale. Tourism also developed through the railroad in the scenic Eifel region.

The construction of the West Wall in 1938 brought further decisive changes . Due to the workers on the western wall, the population increased enormously at times, and the construction work also offered additional jobs for the local population in a traditionally structurally weak region. Since Irrel is very close to the western border with Luxembourg, a large number of bunkers were built in the municipality, including two of the largest bunkers on the Western Wall: the Katzenkopfbunker, which is now a museum , and the Nimsbunker, both with armored domes and several underground floors. Irrel was affected by World War II from 1939. Due to its location in the immediate vicinity of the western border, within the so-called “ red zone ”, Irrel was evacuated for several weeks and the population was moved to the Harz and the Westerwald. In 1944 and 1945, around 70% of the area was destroyed by artillery shelling, aerial bombs and detonations by the retreating troops. The residents held out from autumn 1944 until the liberation in February 1945 by the US Army in neighboring towns or the surrounding forests. The place Irrel lost approx. 10% of the population. In addition to fallen or missing soldiers, there were also many civilian deaths.

As a result of the Nazi era, there is no longer a Jewish population in Irrel. Several families of Jewish faith resided in Irrel until the 1930s. In addition to professions such as cattle traders and saddlers, there were also landlords and a butcher. Only the Jewish cemetery in Talstrasse still tells of a shared history.

The post-war period is characterized by the development of the place into a basic center of the region, for example through the building of schools and the settlement of shops. Tourism in the southern Eifel reached its heyday in the 1950s and 1960s, many hotels, guest houses and the Irrel campsites date from this time. Today the region is more of a travel destination for local recreation and short trips. The railway systems that had dominated the townscape up to that point were completely removed in the center of the town in the 1990s.

Today agriculture, which was one of the main branches of business until the post-war period, is of very little importance; most employees commute to the Bitburg area, to nearby Luxembourg or to Trier.

The development of the population of Irrel, the values ​​from 1871 to 1987 are based on censuses:

The municipal council in Irrel consists of 16 council members, who were elected in the local elections on May 26, 2019Template: future / in 3 years in a majority vote, and the local mayor as chairman. In 2014, a personalized proportional representation took place. The 16 seats in the local council are divided between four different groups of voters .

Agriculture in the village is of little importance. Most employees commute to work in the Bitburg area, nearby Luxembourg or Trier.

The community is accessible through the district road K 20 , the state roads L 4 and L 40 and the federal road 257 .