Keith Matthew Tkachuk (born March 28, 1972 in Melrose , Massachusetts ) is a former American ice hockey player and current scout , who played 1290 games for the Winnipeg Jets , Phoenix Coyotes , St. Louis Blues and Atlanta Thrashers in the National Hockey League on the position of the left winger and scored over 1000 points . Tkachuk won the Maurice Richard Trophy as the NHL's top scorer in 1997 . With the national team of the United States , he won the gold medal at the 1996 World Cup of Hockey and the silver medal at the 2002 Winter Olympics . 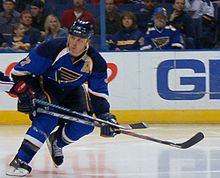 Tkachuk in the dress of the St. Louis Blues

Tkachuk, who has a German grandfather, played for Malden Catholic High School until 1990 and was then elected 17th in the first round of the 1990 NHL Entry Draft by the Winnipeg Jets . He played another year for the Boston University team before making the leap to the NHL.

In the NHL 1991/92 he came to only 17 games in the NHL, but from the following season he was an integral part of the Jets. Tkachuk was not only dangerous for goals, he also used his physical strength and was always at the forefront of the penalty minutes. Together with Teemu Selänne and Alexei Schamnow , he formed one of the best young assault ranks in the NHL. From the mid-1990s he was the captain of the team that, after its best season in 1995/96 with 98 scorer points, moved from central Canada to sunny Arizona . Here Tkachuk was the face of the team in the first few years. After five years in Winnipeg and another four with the Phoenix Coyotes , he was given to the St. Louis Blues towards the end of the fifth season .

Tkachuk was also one of the most successful players in St. Louis. But year after year he was criticized for lack of fitness and overweight. In February 2007 he was transferred to the Atlanta Thrashers , but only returned to St. Louis four months later. In April 2010, Tkachuk announced that he would retire at the end of the 2009-10 season. In 2011 he was honored with induction into the United States Hockey Hall of Fame . Tkachuk has been working as a scout for his ex-team St. Louis Blues since the 2014/15 season .