Lanny King McDonald (born February 16, 1953 in Hanna , Alberta ) is a former Canadian ice hockey player who played for the Toronto Maple Leafs , the Colorado Rockies and the Calgary Flames in the National Hockey League (NHL) from 1973 to 1989 .

Lanny McDonald grew up on a farm in Hanna, Alberta, the youngest of four children and learned to skate at the age of seven. He was enthusiastic about ice hockey when he accompanied his sisters to games of their friends and tried to develop and improve skills for the game on his own. At the age of 16, McDonald decided to leave his hometown to play for the Lethbridge Sugar Kings in the Alberta Junior Hockey League. During the 1970/71 season he moved to Calgary in the West Coast Junior Hockey League (WCJHL) and stayed in that league for the next two seasons to play for the Medicine Hat Tigers .

Scouts recognized Lanny's hard shot, his outstanding skating skills and his toughness as particular strengths, which is why he was fourth in the 1973 NHL Amateur Draft of the Toronto Maple Leafs and in the World Hockey Association (DP: 10, Team: Cleveland ) was pulled to a low position. He scored two assists in his first game for Toronto. However, early in his NHL career, Lanny McDonald struggled with balance on his skates, which kept him below expectations in his first two seasons. He was then given custom-made skates with the blades at a special angle, which was clearly reflected in his performance when he doubled his score in the 1975/76 season. As a result, he was appointed to Canada's national team for the Canada Cup in 1976 and played five games for the host country, which ultimately won the tournament. In 1977 Lanny McDonald was appointed to the Second All-Star Team. He reached the peak of his years in Toronto in 1978 when he scored the winning goal of the playoff series against the New York Islanders and shot the Maple Leafs in the final of the Prince of Wales Conference .

On December 28, 1979 Lanny McDonald was transferred to the Colorado Rockies together with Joel Quenneville in exchange for Pat Hickey and Wilf Paiement . The trade was controversial as it also persuaded Darryl Sittler , who already played in a row with McDonald's in Lethbridge, to leave the Maple Leafs. Lanny McDonald was named captain of the Rockies in early 1981. Although he continued to perform well in Colorado, he could not record any successes worth mentioning with the Rockies and was transferred to the Calgary Flames on November 25, 1981 together with a draft pick . Don Lever and Bob MacMillan made their way from Calgary to Denver. 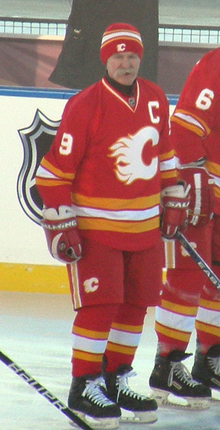 Lanny McDonald at the Heritage Classic 2011

In Calgary, McDonald's undoubtedly had its most glorious years when he returned to his native Alberta in year 2 of the Calgary Flames' history. In his second season in Calgary 1982/83 he set the still intact club record of the Flames for goals by a player in one season, which is a proud 66 pieces and even competed with "The Great One" Wayne Gretzky . This season he was called up for the second time in his career to the Second All-Star Team and received the Bill Masterton Memorial Trophy at the end of the season for his perseverance and enthusiasm . This made Lanny the most valuable player in the Flames, with whom he reached the Stanley Cup final in 1986. However, his team lost the final series 1: 4 against the Montréal Canadiens . 1987/88 managed the Flames, with McDonald as their captain, for the first time the Edmonton Oilers , who had dominated the NHL for years, to dethrone and to win the Presidents' Trophy as the best team of the regular season. The following year he scored his 500th career goal in March 1989 against the Winnipeg Jets , which would also be the last regular season goal of his career. The Flames not only achieved another President's Trophy win this season under McDonald's team leadership, but also took the Stanley Cup home with them when they won the final series (again against Montreal) 4-2 and Lanny McDonald scored the only goal this postseason in the decisive game against the Canadiens. After winning the Stanley Cup, he declared his glorious career over after 16 years in the NHL. With that he had scored both his first and last career goals in the Montreal Forum. At the end of his career, he received the King Clancy Memorial Trophy in 1989 and his jersey number 9 was the first number to be banned by the Flames. In 1,111 games in the NHL, he scored 500 goals and a total of 1006 points.

After his playing career

Lanny McDonald stayed with the Flames even after his career as an active player. In August 1989 he was appointed business vice president of the Flames and held this and similar positions until 2001. In 1992, he was inducted into the Hockey Hall of Fame , making him the first Calgary Flames player to receive this honor. In the 2001/02 season he was an executive advisor for sports at the Flames and now works for Team Canada . He is particularly committed to the Special Olympics . He once said: "Seeing their faces is like scoring 66 goals again." At the 2004 NHL player ceremony, Lanny McDonald presented the Flames captain Jarome Iginla with the King Clancy Memorial Trophy for his commitment and work charitable organizations.

Captain of the Kansas City Scouts and Colorado Rockies

Crew captains of the Calgary Flames