Olaf Koelzig (born April 6, 1970 in Johannesburg , South Africa ) is a former German ice hockey goalkeeper who played for the Washington Capitals , Tampa Bay Lightning and Toronto Maple Leafs in the National Hockey League from 1990 to 2009 . Kölzig is one of the few players in NHL history to be born south of the equator .

Born in South Africa to German parents, the Kölzig family moved to Canada in 1973 . Olaf Kölzig began his career there in 1986 in the lower class junior league British Columbia Junior Hockey League , before he was used for the first time for the New Westminster Bruins in the first-class Western Hockey League in the 1987/88 season . The team relocated in the summer of 1988 and renamed themselves Tri-City Americans . Kölzig shared the post as regular goalkeeper with Frank Furlan , who was two years older than him , but was able to show better performances, whereupon he was selected in the first round in the NHL Entry Draft in 1989 by the Washington Capitals in 19th position.

He also came at the beginning of the 1989/90 season to his first two NHL missions, but suffered two defeats and a total of twelve goals against, whereupon he was sent back to the Tri-City Americans for the time being. In the summer of 1990 he left the WHL for good and played in the following two seasons with the Hampton Roads Admirals in the East Coast Hockey League and the Baltimore Skipjacks in the American Hockey League , both of which served as farm teams of the Capitals.

In 1992/93 Kölzig was used again in the NHL, but only for 20 minutes. Instead, he took over the position of regular goalkeeper in the AHL at Rochester Americans , with whom he moved into the final of the playoffs for the Calder Cup , but failed there because of the Cape Breton Oilers .

At the beginning of the 1993/94 season , Kölzig was part of Washington's regular squad, but shortly afterwards he suffered a knee injury and was out for over a month. After his return he played again in the AHL for the new farm team of the Capitals, the Portland Pirates . Together with Byron Dafoe , he made sure that the Pirates were the team with the fewest goals in the league. Both received the Harry "Hap" Holmes Memorial Award for this . Kölzig was the second German goalkeeper to receive this award after Karl Friesen in the 1985/86 season. In the playoffs, Kölzig led the team to the final and while he lost with the Rochester Americans last year, this time he won the Calder Cup with the Pirates and was also awarded the Jack A. Butterfield Trophy as the most valuable player in the final.

Due to his good performance, Kölzig was brought back to the Capitals NHL squad for the 1994/95 season , but the start of the season had to be postponed by three months due to the lockout . Together with the 20-year-old goalkeeper Jim Carey, Kölzig formed the team's goalkeeper team and made 14 appearances in the season shortened to 48 games. In the playoffs Carey showed weaknesses in the first round, so Kölzig got the chance, but could not avert the first-round defeat.

In the following season Jim Carey was again the undisputed number one of the Capitals and was awarded the Vezina Trophy as the best goalkeeper in the NHL . Kölzig was used as a backup only 18 times. But as in the previous year, the younger Carey could not meet expectations in the playoffs and Kölzig replaced him again. Despite good performances, he could not prevent the elimination in the first round. Even so, Carey remained the Capitals goalkeeper in the following season before he was transferred to the Boston Bruins in March 1997 . But instead of making Kölzig number one, the team relied on the more experienced Bill Ranford , who had come from Boston for Carey, for the rest of the season .

Olaf Kölzig in the gate of the Washington Capitals

In the 1997/98 season , Kölzig was able to establish himself as a regular goalkeeper in Washington, also due to several injury breaks from Ranford, and led the Capitals back to the playoffs after the unsuccessful preseason. There he became an important source of support for the team, playing twice in a row against the Ottawa Senators in the second round and paving the way for the final with another shutout against the Buffalo Sabers , giving the Capitals a 3–1 lead, which they no longer gave away. In the Stanley Cup final , however, they could not win a game against the Detroit Red Wings . Although Kölzig only conceded two goals in two games, the Capitals offensive could not use this opportunity and the Red Wings were able to defend their title.

After the most successful year in the history of the franchise , the team was unable to build on the performance in the following season. Although Kölzig played a solid season again, his 26 wins in 64 missions were not enough to qualify for the playoffs. In the 1999/2000 season , the Capitals returned to the road to success and Olaf Kölzig played the best season of his career. He was able to win 41 of 73 league games and was also at the top of the league with an average goal conceded of 2.24. After the season, he was awarded the Vezina Trophy as the best goalkeeper in the NHL for his achievements.

Kölzig developed into a star in Washington and was able to close the following season with a similarly good result, but in the 2001/02 season the Capitals missed the playoffs. The following year they returned to the finals, but as in the last two appearances, they did not get past the first round. The 2003/04 season turned out to be a disaster for the Capitals. Kölzig could only win 19 of its 63 games and the management transferred top performers such as Robert Lang , Jaromír Jágr , Peter Bondra and Sergei Gontschar to other teams, so that the team was weakened even more. At the end of the season, the Capitals were third from last in the NHL with their worst season result in 25 years.

Olaf Kölzig, who played for the German national team in several international tournaments but had never played in a German league, used the failure of the 2004/05 NHL season to play for the first time for a team in his parents' home country. In February 2005, Kölzig signed a contract with the Eisbären Berlin from the DEL and won the German championship with them , but was not used in the final series due to an injury. 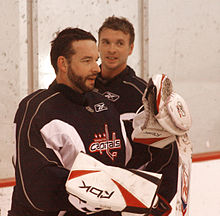 In the summer of 2005 he returned to North America and together with Brent Johnson formed the goalkeeping team of the Capitals, which were reinforced by the young star Alexander Ovetschkin . Kölzig was still the team's regular goalkeeper, but played one of the worst seasons of his career and achieved the worst conceding average since he became number one in Washington. In addition, the team conceded the second most goals in the regular season. Even in 2006/07 Kölzig did not find its way back to old constancy and Washington again provided one of the worst defensive departments in the league.

In 2007/08 he had another better season, winning 25 of his 54 games, but was replaced in Washington on two counts. While Kölzig was considered the “face” of the franchise in recent years, Alexander Ovetschkin, who was the season's best scorer and goalscorer, took this place. In addition, at the end of February 2008, a new goalkeeper, Cristobal Huet, was hired , who led the Washington Capitals back into the playoffs for the first time in five years. After all, Kölzig was able to achieve an important milestone during the few missions that he only got since Huet was signed, when he celebrated his 300th victory on March 12, 2008 as the 23rd goalkeeper in NHL history .

After Kölzig was no longer used during the playoffs, he announced in early May 2008 that he would not return to the Capitals for the 2008/09 season and left a decision on the continuation of his career open for the time being. On July 1, he decided to continue his career with the Tampa Bay Lightning , where he signed a contract. There he could not prevail against his younger competitor Mike Smith and was only used in eight games, in which he fell short of expectations. At the end of January 2009 a tendon rupture in his biceps was found, so that Kölzig was out for the rest of the season. Even so, he was sent to the Toronto Maple Leafs in a transfer deal in early March . At the end of the season, the native South African received no new contract, whereupon the players 'union National Hockey League Players' Association announced his resignation from active sport on 23 September 2009 on his behalf.

Since 2005, Olaf Kölzig, together with the former ice hockey player Stu Barnes and the entrepreneur Dennis Loman, has owned the Tri-City Americans , his team from junior times, from the Canadian junior league WHL . After the end of his career, he wants to be more involved in the work of the association. B. as a goalkeeper coach.

In 1989, Kölzig was a member of the Canadian junior national team , but he was denied participation in the Junior World Championship shortly before the start of the tournament because he had a German and not a Canadian passport. Olaf Kölzig was born in South Africa and grew up in Canada, but he retained his German citizenship . It was only through a conversation between Kölzig and the German national player Stefan Ustorf during their time together in the organization of the Washington Capitals in the mid-1990s that the German Ice Hockey Association became aware of Kölzig. This enabled him to play for the German national team and at the 1996 World Cup of Hockey he made his debut in the national jersey. In addition to appearances at the World Championships in 1997 and 2004 , he also took part in the Winter Olympics in 1998 and 2006 . In total, Kölzig played 18 international matches for Germany in international tournaments.

Kölzig received recognition in the Washington Capitals as well as in the NHL mainly because of his social commitment. Due to his son's autism disease, he founded the Carson Kolzig Foundation for Youth Autism and co-founded Athletes Against Autism alongside his former teammate and friend Byron Dafoe and former NHL player Scott Mellanby . Both institutions are committed to research into autism and the treatment of autistic children.

During his time in Washington, Kölzig also supported the local children's hospital through the Ollie & Elliot's Great Save Program , created in collaboration with DJ Elliot Segal , which organized golf and tennis tournaments for celebrities, the proceeds of which went to the children's hospital. In addition, Kölzig donated one dollar for every shot held, $ 50 for every win, $ 100 for every shutout and $ 25 for every point the Washington Capitals reached. The team owner of the Capitals, Ted Leonsis , doubled the amount raised.

For his charitable work, Kölzig was awarded the NHL Foundation Player Award in 2001 and received the King Clancy Memorial Trophy from the NHL in 2006 for his social commitment and leadership skills .