The 68th World Ice Hockey Championships the men in 2004 the IIHF took place on the following dates and at the following locations.

A total of 45 teams took part in these world championships, which meant a new participation record.

Only two teams took part in the qualification this year, alongside Japan the representation of South Korea, while the ice hockey team of China decided not to participate. The venue for the only qualifier was Tokyo .

The 2004 World Cup was the last where a place was reserved for a team from the Far East. Japan celebrated its best placement with 15th place, but has not been promoted to the top division so far (as of 2020). South Korea, on the other hand, was able to qualify for the top division 2018 on its own .

The tournament of the men's top division in the Czech Republic lasted from April 24 to May 9, 2004 . The venues were the Sazka Arena in Prague and the ČEZ Aréna in Ostrava . The 2004 tournament was of particular importance, as the teams that were ranked 1-8 in the IIHF world rankings after the tournament were directly qualified for the 2006 Olympic ice hockey tournament. Canada became world champion again and successfully defended its title and achieved its 23rd title win in history. 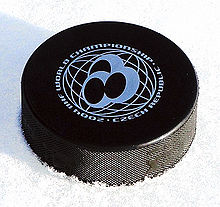 16 teams took part. In addition to the host Czech Republic , the remaining 12 best teams from the last World Cup , the two promoted teams from Division I (Kazakhstan, France) and the Asian representative who played in an extra qualification (see above). The mode of competition was almost the same as in the previous year ; The game was played in four preliminary round groups A – D, each with four teams. The first three then played in the intermediate round groups E and F, the last group played in the relegation round (group G). The results of the qualified teams among each other in the preliminary rounds were transferred to the intermediate round. This was followed by the play-offs with the quarter, half and final games as well as the game for 3rd place. There was a slight change in the promotion and relegation rules. The possibility of a Far East representative to qualify for the respective world championship through an extra qualification has been abolished. The last two of the relegation round had to be relegated to Division I in 2005, this also applies to the Japanese team, the runner-up in the relegation round was allowed to remain in the World Cup group, unlike in previous years.

In the point games, the 2-point rule (2 points for a win, 1 point for a draw, 0 points for a defeat) was scored. As usual in ice hockey, if there is a tie, the direct comparison first decides and only then the goal difference. (If a decision had not yet been made, the next criterion would be the number of goals scored. If these were also the same, there would be a decisive penalty shootout.)

In the play-offs, except for the final, in the event of a tie after 60 minutes, all games were extended 1 × 10 minutes, with the number of field players per team reduced to four. In the final, the extension would have lasted a maximum of 20 minutes. If a goal is scored, the game is over ( sudden death ), if no goal is scored, a penalty shoot-out occurs.

In Group A: the Czech Republic, Germany, Latvia and Kazakhstan played. The games took place in Prague .

In Group B: Slovakia, Finland, Ukraine and the USA played. The games took place in Ostrava .

Relegation round for places 13–16, group G

Group G matches, with the exception of the Ukraine-Japan match, took place in Prague .

The games took place in Prague . The direct comparison from the preliminary round has been adopted.

With the exception of the USA-Denmark game, the Group F games took place in Ostrava . The direct comparison from the preliminary round has been adopted.

The play-off games all took place in Prague .

After the Swedes took the lead in the third minute through Jonas Höglund and increased to 2-0 in the 8th minute through Daniel Alfredsson, the match seemed almost over. After the 2-1 goal by Ryan Smith (14th), the Swedes were able to restore the 2-goal lead by Andreas Salomonsson in the 25th minute with a double strike in the 35th / 36th. Minute through Dany Heatley and Rob Niedermayer , however, the Canadians were able to equalize and subsequently found their way into the game. For the first time since 1958/59, the Canadians managed to successfully defend the world championship title.

Final placement of the World Cup

Division I, Group A

The Group A games of Division I took place from April 12th to 18th in Oslo , Norway . In Group A played: Belarus (A group relegated), Great Britain, Hungary, the Netherlands, Norway, Belgium (promoted division II)

Division I, Group B

The games of Group B of Division I took place from April 12th to 18th in Gdansk , Poland . In group B: Slovenia (A group relegated), Italy, Romania, Estonia, Poland, South Korea (promoted division II)

The games of the Division III took place from 16th bis 21st March in Reykjavik on Iceland instead. In Division III, Iceland, Mexico (both relegated to Division I), Turkey, Ireland and Armenia played.