Quirós is a Spanish municipality ( concejo in Asturias, corresponds to the municipio in the rest of Spain) in the autonomous region of Asturias . It borders on Santo Adriano and Morcín to the north, Lena and the province of León to the south, Proaza and Teverga to the west, and Riosa to the east . The main town and seat of the municipal administration is Bárzana .

Numerous finds from the Neolithic Age attest to the early settlement of the community. Dolmens and ramparts near La Cobertoria and the copper mine near Aramo also bear witness to the economic importance of the Neolithic.

During the occupation of Iberia by the Roman Empire , the region around Quiros was also important, as many place names still show. Only the invasion of the Visigoths and the conquest of Spain by the Moors let this region disappear from the visual field of time.

During the time of the Kingdom of Asturias , Quiros was subordinated to the Archdiocese of Oviedo by decree of Ordoño I. In the 16th century Quiros was by Philip II in agreement with Pope Gregory XIII. the parish law conferred and thus released from the secular administration of the archdiocese . 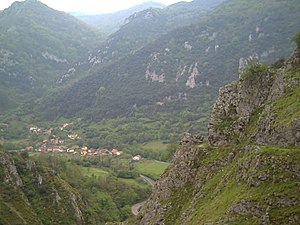 Population development of the municipality

Quiros is divided into 13 parroquias .

A large number of architectural monuments from partly Romanesque times as well as necropolises and ramparts can be found throughout the municipality. Particularly noteworthy is the Ethnographic Museum , which shows an overview of the history and folk art of the community.

Municipalities in the Comarca of Oviedo