Schöngleina is a municipality in the east of the Saale-Holzland district in Thuringia . The fulfilling municipality is Bad Klosterlausnitz .

Schöngleina is located on the LIO75 state road between Jena - Bad Klosterlausnitz, southeast of the Wöllmisse ridge .

The place is first mentioned in 1190 as Gleina (also Glyne or Glina) (other sources report that it was first mentioned in 1228). Also in 1190 an Otto von Glina, presumably the progenitor of the noble family of the same name, is called the Lords of Glina . The estate in Glyne was a fief of the lords of Lobdaburg- Burgau . Around 1341 the Lords of Lichtenhayn are named as owners. Between 1580 and 1594 they built a castle that looked more like a fortified castle . The complex consisted of five towers, a rampart and a moat, of which only a few remains are preserved today. Other owners were the Barons von Brand around 1655 . In 1796 Schöngleina became a ducal chamber property . After the Second World War , the chamber property was transferred to "public property". The main focus of production was on sow farming with piglet rearing. Later one went over to fruit growing and apprenticeship training. After the fall of the Wall, they reoriented themselves.

To distinguish it from other villages of the same name, Gleina became Schöngleina.

In the village there is the “Rappelkiste” daycare center , which was reopened in April 2000.

Tower of the airfield 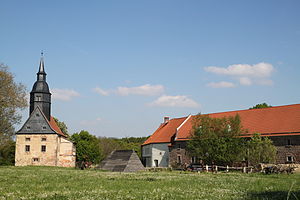 A large number of small businesses are based in the village: the Heideland Gutsverwaltung, a large pig production company, a fruit farm and on the outskirts, "auf der Zinna", a recycling company.

Cities and communities in the Saale-Holzland district