The parish church of St. Florian

Bogen is a town in the Lower Bavarian district of Straubing-Bogen .

The city is located in the Danube Forest region on the Danube , on the Bogenbach and at the foot of the Bavarian Forest .

There are 77 parish parts:

Memorial plaque at the town hall on the history of Bogen

Bogen is first mentioned under the name Villa Pogana around the middle of the 8th century. Initially, the Babenbergs were the owners of the county rights here. Then it was the seat of the Counts of Bogen , whose white and blue diamond coat of arms is now part of the Bavarian state coat of arms . As early as 1220, Bogen was known as a "forum" (market).

After the death of the last count of Bogen, their territory fell to the Wittelsbach family in 1242 . In 1341, Bogen received market rights . In the 15th century, Bogen experienced a heyday in connection with the Bogenberg pilgrimage. In the Thirty Years' War the market suffered a considerable loss of population. The important pilgrimage to the Bogenberg pilgrimage church once again provided an upswing for the whole town .

Bogen belonged to the Straubing Rent Office and the Mitterfels Regional Court in the Electorate of Bavaria . It had a market court with its own magistrate rights. The Oberalteich monastery had an open court market here . Fires devastated the place in 1719 and 1837.

In 1839, Bogen became the seat of a regional court . In 1860 the market had 1,350 inhabitants and no fewer than twelve breweries. From 1862, Bogen continued to gain importance because the district office and the notary's office were separated from the regional court as separate authorities. A little later, the legal part of the regional court became the Royal Bavarian District Court . On December 9, 1895, Bogen received a railway connection with the completion of the first section of the Straubing – Miltach railway line .

The city elevation of Bogen took place in 1952. With the construction of the Graf-Aswin barracks in 1958, a grammar school, secondary school and eight industrial companies as well as incorporations, the size and importance of Bogen increased significantly after the Second World War.

In 2012, the Europa Park Bayern-Böhmen recreational park was inaugurated. 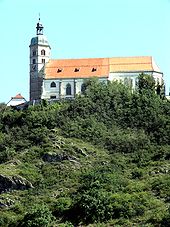 The former station building of Bogen

Since 1958, Bogen has been a major Bundeswehr location with the Graf Aswin barracks .

The Straubing – Miltach railway was shut down from Bogen in May 1994.

In the Hofweinzier district there is a slaughterhouse owned by Donautal Geflügelspezialitäten, which belongs to the Lohmann subgroup of the PHW Group (known under the Wiesenhof brand). The plant, with a capacity of up to 250,000 slaughterings per day, one of the largest in southern Germany, burned down in February 2015, but it was rebuilt in a similar size and has already started operations again.

Several large companies are located in the Bogener industrial areas, for example hydraulic and welding companies.

Districts of the city of Bogen

Municipalities in the district of Straubing-Bogen