O-Töne is a literature festival on contemporary Austrian literature that has been held annually since 2004 in the MuseumsQuartier in Vienna . The readings take place under the open sky at dusk at various locations within the museum complex. 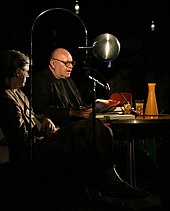 Since the first event in 2004, the O-Töne program has been to present “a new generation of Austrian authors who have a major impact on the current literary discourse in this country” and to make “the broad spectrum of contemporary spelling visible” . Gabriela Hegedüs and Christoph Möderndorfer are responsible for the festival management, concept and implementation . Curator of the series is Thomas Keul , editor of the literary magazine " FULL TEXT ".

In contrast to major literary festivals elsewhere, the authors and the texts they have presented should be the focus of O-Töne. Both already published and unpublished texts will be presented at the readings.

Since 2005, the individual readings have been introduced by well-known literary scholars and critics, who are intended to bring the audience closer to the classification of the text in the overall works of the lecturer and the literary life of Austria as a whole.

In contrast to previous years, the o-töne 2011 present both Austrian authors and authors from other European countries as part of “Austrian-European double features”. The compilation was carried out by curator Thomas Keul in cooperation with Pro Helvetia and the Vienna branches of the Istituto Italiano di Cultura , the Institut français and the Romanian Cultural Institute , as well as the Czech Center Vienna , the Polish Institute Vienna , the Slovak Institute in Vienna and the Embassy of Finland .

A preview on June 20 in cooperation with the Collegium Hungaricum and the Embassy of Estonia presented the Hungarian writer Péter Esterházy , musically accompanied by László Dés and followed by a concert by the Estonian singer Siiri Sisask .

As the organizers declared, due to the large number of visitors, the 2012 quotes no longer comprised eight, but nine evenings. The first excerpts from current book publications were presented at six of the readings.

Opening concert: The Nino from Vienna with Ernst Molden , before that a serenade for the 10th anniversary of the o-töne of Willi Resetarits and Molden