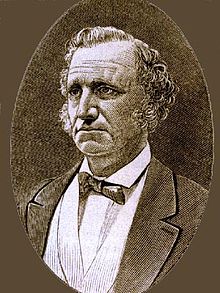 Flanders attended New Hampton Academy and then Dartmouth College until 1842 . The following year he moved to New Orleans , Louisiana, where he studied law. But he never worked as a lawyer. Instead, he worked as a teacher. He also published the New Orleans Tropic newspaper.

Flanders was a councilor in New Orleans between 1847 and 1852. In 1850 he was also a school councilor ( Superintendent of public schools ) in this city. Between 1852 and 1861 he was on the board of directors of the Opelousas and Great Western Railroad . Since he did not want to join the Louisiana secession , he had to flee New Orleans at the beginning of the civil war . In 1862 he returned to this city after the conquest of New Orleans by the Union forces. Between July and December 1862 he was a chamberlain there and between December 3, 1862 and March 3, 1863 he represented the Union-occupied Louisiana in the US House of Representatives in Washington .

In July and August 1863 he was for a short time captain of a regiment subordinated to the Union from Louisiana. From 1863 to 1866 he was on behalf of the Federal Treasury special agent for the southern district, which included the areas occupied by the Union in Louisiana, Texas , Mississippi , Alabama and western Florida . In this capacity he sold, among other things, the confiscated cotton. In 1864 he had run unsuccessfully for governor of Louisiana. During this time Flanders was also one of the founders of the Republican Party in Louisiana. He campaigned for blacks to vote. He was also the first president of the First National Bank of New Orleans .

Governor of Louisiana and Mayor of New Orleans

After serious differences in 1867 between the Louisiana Military Commander General Philip Sheridan and Governor James Madison Wells , the general dismissed the governor and appointed Benjamin Flanders as his successor on June 3. He held this office for only six months until January 8, 1868. The reason for his resignation was the removal of all radical Republican officials from the government by the new military commander, General Winfield Scott Hancock . The general appointed Joshua Baker to succeed Flanders.

In 1870, Flanders was named mayor of New Orleans by then Governor Henry C. Warmoth and was then officially elected to this office, which he then held between 1870 and 1872. From 1873 to 1882 he was Deputy Head of the US Treasury in New Orleans ( Assistant Treasurer of the United States at New Orleans ). In 1888 he unsuccessfully applied for the office of Treasury Secretary of Louisiana. Benjamin Flanders died in 1896. He had six children with his wife, Susan H. Sawyer.

Members of the United States House of Representatives for Louisiana