Burgebrach [ bʊrkˈeːbrax ] is a market in the Upper Franconian district of Bamberg and the seat of the Burgebrach administrative community .

Burgebrach is considered the eastern gateway to the Steigerwald at the confluence of the Middle Ebrach and the Rauhe Ebrach . It is located on federal road 22 halfway between Bamberg and Ebrach .

Burgebrach is divided into 27 officially named districts (population figures from June 30, 2019 in brackets):

The first name of the place in 1023 was Urbs Ebraha . Emperor Heinrich II gave it to the diocese of Würzburg , which Burgebrach sold to the Bamberg monastery in 1377 . Burgebrach was the original parish for over 40 places in the area. It was granted market rights on August 21, 1472 by the Bamberg Bishop Georg von Schaumburg .

In 1499, at the request of the bishop, three defensive towers had to be built, for which he exempted the town from taxes. Walls were not needed because the swampy meadows and the two Ebrach arms prevented enemy attacks for a long time. Burgebrach was spared in the Hussite War and the Peasants' War . It was not attacked by the notorious Margrave Albrecht Alcibiades until 1550 and plundered and pillaged by the Swedes on February 16, 1632 during the Thirty Years' War . In 1706, extensive contributions in cash and in kind had to be paid to the French .

With the Reichsdeputationshauptschluss of 1803, the place came from the bishopric of Bamberg, which was from 1500 in the Franconian Reichskreis , to Bavaria.

The former community of Herrnsdorf had already been renamed Mönchherrnsdorf on December 25, 1868 .

According to the census on May 9, 2011, 78.8% of the population are Roman Catholic and 11.6% Evangelical Lutheran. 9.6% have another religion or are non-denominational.

First mentioned in 1451, the Burgebrach Jewish community ceased to exist in 1926.

The market council consists of 20 members and the first mayor. The distribution of seats in the 2020/2026 electoral period is as follows:

There is a partnership with the municipality of Kapsweyer in Rhineland-Palatinate.

The coat of arms was awarded by Philipp von Henneberg in 1480 , with the castle and a wavy blue bar representing the place name. The coat of arms is emblazoned as follows : A silver castle with a stepped gable above the open gate, a silver crenellated tower with a blue pointed roof on each side, standing in red over a green shield base on a wavy, blue beam.

Gatehouse of the Upper Gate from 1720; it serves as the town hall 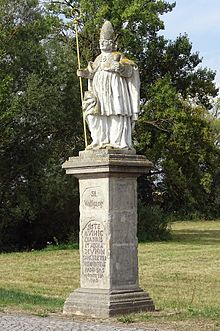 Sandstone figure of St. Wolfgang on the Nikolaibrücke near Grasmannsdorf

Burgebrach has been a middle center since 2018 and has its own hospital, the Steigerwaldklinik Burgebrach. There is also a lot of retail trade. There is also an automotive supplier and a musical instrument and sound technology retailer ( Musikhaus Thomann ), which it claims to be the largest music house in Europe.

State road St 2262 (Schlüsselfeld - Unterhaid) and federal road 22 (Bamberg - Würzburg) run through Burgebrach . The federal motorway 3 can be reached via the Schlüsselfeld or Pommersfelden junctions. Furthermore, the St 2263 begins in the Untereueses district, which leads via Höchstadt an der Aisch to the independent city of Fürth . The St 2279 from Lower Franconia to Bamberg also leads through the municipality as well as the St 2779, a branch. Several district roads cross the community, the BA 29 from Untereuses to Bamberg-Bug with a connection at Pettstadt to the federal highway 505 as well as the BA 33 from Treppendorf to Küstersgeuth, i.e. located entirely within the municipality and the BA 45 from Oberköst to Steppach (Pommersfelden) . Many GVS run through the community. From Oberköst to Decheldorf (municipality of Mühlhausen) the district border is crossed to Middle Franconia .

The Burgebrach station was on the Strullendorf – Ebrach railway line . The line was closed in 2003 and dismantled in 2006. In 2009, the cycle path between Frensdorf and Ebrach was built on the former railway line.

Sons and Daughters of the Market

Municipalities in the Bamberg district