The DeSoto County is a county in the US -amerikanischen State Mississippi . In 2010 , the county had 161,252 people and a population density of 130.3 people per square kilometer. The county seat is Hernando .

DeSoto County is part of the Memphis metropolitan area . It includes part of the southern suburb of the immediately adjacent city of Memphis in Tennessee . 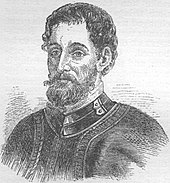 DeSoto County was formed on February 9, 1836 from Indian Territory. It was named, like the district capital, after the "discoverer" Hernando de Soto , a Spanish navigator and conquistador .

Counties in the US state of Mississippi