The Lowndes County is a county in the US state of Mississippi . The county seat is Columbus , named after Christopher Columbus , an Italian seafarer in Spanish service who is commonly credited with discovering America .

The county is located in northeast Mississippi, borders Alabama to the east and has an area of ​​1,338 square kilometers, of which 37 square kilometers are water. It borders on the following counties:

Lowndes County was formed on January 30, 1830 from parts of Monroe County. It was named after the US Congressman William Lowndes .

The historic SD Lee House is located in Columbus , a house built around 1847. The owner was the former General Stephen Dill Lee . The building was listed as a Historic Monument on May 6, 1971 by the National Register of Historic Places under number 71000456.

One building has National Historic Landmark status , the Charles McLaran House . 33 buildings and sites in the county are registered in the National Register of Historic Places (as of February 2, 2018).

Cox-Uithoven House , listed in the NRHP 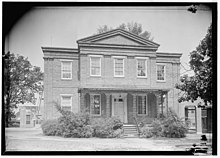 Columbus Bridge , listed in the NRHP

According to the 2000 census , Lowndes County had 61,586 people in 22,849 households and 16,405 families. The population density was 47 people per square kilometer. The racial the population was composed of 56.47 percent white, 41.56 percent African American, 0.17 percent Native American, 0.54 percent Asian, 0.03 percent of residents from the Pacific island area and 0.39 percent from other ethnic groups Groups; 0.85 percent were descended from two or more races. Hispanic or Latino of any of the above mentioned groups were 1.11 percent of the population.

Counties in the US state of Mississippi