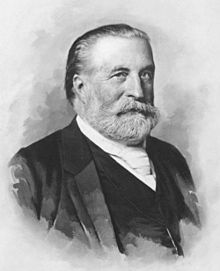 His main merits are the co-founding of brain surgery and the introduction of asepsis in wound treatment .

His first marriage was on March 16, 1866 in Dorpat Hildegard von Adelmann (* July 17, 1846, in Dorpat; † May 30, 1868, ibid), the daughter of the Imperial Russian Real Councilor of State Georg von Adelmann (from Russian ( German- Baltic ) nobility), professor at the University of Dorpat , and Marie Barkhausen.

In his second marriage he married on April 24, 1871 in Karlsruhe Pauline Asbrand called Porbeck (born August 3, 1842 in Rastatt , † July 17, 1917, in Marburg ), daughter of the Grand Duke of Baden upper bailiff to Gernsbach August Asbrand called by Porbeck and Louise Thilo. A son from this second marriage was the internist and medicine professor Gustav von Bergmann (1878–1955).

After completing secondary education at the humanistic college in Birkenruh near Wenden (Livonia), Bergmann studied medicine in Dorpat between 1854 and 1860. Following the graduation (1860) he worked as an assistant at the Department of Surgery Dorpats, where he joined in 1864 by his future father-Georg von Adelmann, who later in the Prussian nobility was raised, and Georg von Oettingen habilitated .

He stayed in Dorpat until 1878, interrupted by a long study trip ( Königsberg , Breslau , Vienna , Hanover , Munich , Heidelberg , Leipzig and Berlin ), initially as a private lecturer in surgery, and from 1871 - in succession to his teacher Adelmann - as a professor of surgery . After he had initially accepted a call to Würzburg in 1878 , where he helped the Würzburg University Surgical Clinic to gain a great reputation over the next four years (since Carl Caspar von Siebold ) and in August of the same year he joined the Bavarian university as a full professor at the university there In 1882 he took over the chair of Bernhard von Langenbeck and the directorate of the surgical university clinic in Ziegelstrasse, which he headed until 1907.

Bergmann must undoubtedly be counted among the greatest surgeons of his time. Especially in war surgery, he had gained extensive experience as a participant in the Prussian-Austrian (1866), the German-French (1870/1871) and the Russo-Turkish war (1877). His method of strictly conservative treatment of injuries to the knee joint was groundbreaking, which he no longer treated surgically, but instead immobilized in a plaster cast (Pirogoff) after being bandaged with Lister's wound dressing . In this way, the fatal course of this injury could be significantly reduced. Initially turning to Lister's method of antisepsis by spraying with carbolic acid, which he had been practicing at his Dorpater Clinic since 1875, he soon replaced this dangerous process with the use of dry sublimate gauze, and finally abandoned chemical antisepsis in 1886. Instead, together with his Berlin student Curt Schimmelbusch , he turned to the use of steam-sterilized bandages.

E. von Bergmann during the amputation of a lower leg with diabetic gangrene

Bergmann developed many new or further surgical methods, including those of appendectomy and surgical treatment of the esophagus and hydrocele . Bergmann's most important publications include his work on The Treatment of Gunshot Wounds of the Knee Joint in War (1878), The Doctrine of Head Injuries (1880) and The Surgical Treatment of Brain Diseases (1888).

The surgeon was involved in the malignant larynx disease of Emperor Friedrich III. , on which his student Friedrich Gustav von Bramann performed a tracheostomy . Bergmann's most important student was the surgeon Erich Lexer .

On November 7, 1884 he became a member of the Leopoldina . Ernst von Bergmann was President of the German Society for Surgery for several years . In 1893 he was chairman of the Society of German Natural Scientists and Doctors . He was a member of the Royal Science and Literature Society in Gothenburg from 1895. In 1904 von Bergmann co-founded the magazine for medical advanced training , which continues to this day under the name of the magazine for medical advanced training and quality in health care (ZaeFQ).

Von Bergmann died in 1907 at the age of 70 and was buried in the old cemetery in Potsdam (Heinrich-Mann-Allee).

Tomb in the old cemetery in Potsdam

President of the German Society for Surgery