Hagen am Teutoburger Wald is a municipality in the southwest of the Osnabrück district in Lower Saxony .

Hagen is located in the western Teutoburg Forest in a basin that is protected on all sides by forests. Nature still shapes large parts of Hagen.

The Goldbach flows through the middle of the Hagen valley basin with numerous small tributaries that contribute to the drainage of the basin.

At Silver Mountain was mined for silver-bearing ore in the 18th century, the growing calamine Hellerkraut . It is on the Red List of Endangered Species . The Silberberg has been a nature reserve since 1937 ; 36.6 hectares of which are protected under the Fauna-Flora-Habitat Directive .

The community borders Hasbergen in the north and Georgsmarienhütte and Bad Iburg in the east . The other neighboring communities belong to the North Rhine-Westphalian Tecklenburger Land ( Steinfurt district ): Lienen and Lengerich in the south and Tecklenburg in the west .

Parts of the community are:

Hagen was mentioned for the first time in 1097 in a document from aristocrat Ruothward to Bishop Wido von Osnabrück . This document speaks of the "parrochia Hagen" ( Parish Hagen). This indicates that a community in Hagen with church structures existed well before the documentary mention in 1097, which is congruent with the present-day Hagen borders. In the deed, the Osnabrück landowner and aristocrat Ruothward transfers two farms in the parish of Hagen and one in the parish of Bramsche to the Osnabrück bishop Wido , which is located in the northern part of the Osnabrück region .

As early as December 8, 852, a farm from the Hagen district of Mentrup was mentioned by name in a transfer from King Ludwig the German to the newly founded Herford Abbey. The Beckerode peasantry , which later forms a district of Hagen, was also mentioned between 1082 and 1096 in the course of the income register of the Herzebrock Benedictine convent . The exact date of the revenue register and which farm belonging to the Beckerode farming community is involved remains unclear.

On April 12, 1723, almost the entire town center burned down. Due to a carelessness of the sexton's son, his kotten caught fire. Due to the half-timbered construction of the buildings, the thatched roofs and the dense development in the Hagener Dorfstrasse, the fire could spread very quickly from house to house and destroyed eleven apartments, two bakery houses and two stables as well as the pastorate , the school and the wooden church tower roof including the two bells. The nave remained largely undamaged thanks to the tiled roof, but red traces in the church masonry still indicate the fire. Due to a lack of financial means, all visible fire damage was not repaired until 1736.

Another fire of comparable magnitude occurred on August 17, 1892, when a young boy dropped a match in the straw in the barn of the Gibbenhof. The Gibbenhof was first mentioned in 1402. The Hagen fire engine , which was quickly fetched, failed, which is why a chain of buckets was made from the village well to the Gibbenhof. When the "Schnapskeller" exploded in the Gibbenhof, which was already completely on fire, sparks jumped onto nearby buildings and set them on fire too. A further spread of the flames could not be prevented by sending workers from Hagen from the nearby ironworks Georgs-Marien-Bergwerks- und Hüttenverein in Georgsmarienhütte and the support of the surrounding fire brigades, so that 18 houses including their outbuildings burned down. But in contrast to the fire of 1723, this fire had far fewer consequences, as public buildings such as church and school were spared and the homeowners affected were all covered by fire insurance. The fire had an impact on the appearance of the town center, which is now being built on with modern buildings. In addition, Hagen was guaranteed a new, modern fire engine which still exists today. The street name Gibbenhoff reminds of the Gibbenhof with a sign pointing to the former Gibben farm.

The municipality of Hagen am Teutoburg Forest was called Hagen-Beckerode until 1954 . On July 1, 1968 Altenhagen and Mentrup were incorporated.

Today's municipality of Hagen am Teutoburger Wald was formed from the former municipalities of Hagen am Teutoburger Wald and Niedermark through the regional reform that came into force on July 1, 1972 . The community of Niedermark was only newly formed on January 1, 1971 through the merger of the communities of Gellenbeck, Natrup-Hagen and Sudenfeld.

The following overview shows the population of Hagen in the respective territories and on December 31st.

The numbers are updates by the State Office for Statistics and Communication Technology Lower Saxony based on the census of May 9, 2011 .

The parish council currently has 30 members from four parties or groups. The mayor is also the chairman of the council with voting rights.

The following table shows the local election results since 1996.

The coat of arms of Hagen consists on the one hand of the six-lobed oak leaf , which is supposed to remind of the six original communities, and the half wheel, which expresses the affiliation to the Osnabrück region.

The Natrup-Hagen train station is located on the Wanne-Eickel – Hamburg railway line near the western municipal boundary . The trains of the Eurobahn stop here every hour in the direction of Münster or Osnabrück . In December 2019, the timetable was supplemented by the Rhein-Haard-Express , which offers a direct connection to Düsseldorf every two hours .

There are also regular bus routes operated by the Verkehrsgemeinschaft Osnabrück from Hagen to Osnabrück on three routes: via Holzhausen , Alt-Georgsmarienhütte and Hasbergen.

Hagen is about 30 kilometers from the Münster-Osnabrück Airport (FMO) in Greven .

Hagen can be reached by car via the federal autobahn 1 , junction Lengerich , or via the A 30 , junction Sutthausen . Hagen is also in the area of federal highway 51 .

Marktauftrommler , sculpture by the sculptor Werner Klenk from Oelde , donated in 1999 by the citizens of Hagen 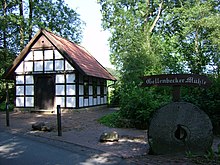 Cherry blossom in the trout valley 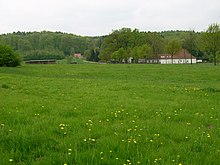 The landmark of Hagen is the former St. Martinus Church. It was built between 1492 and 1523 as the successor to a presumably Romanesque church. In the 1970s, the new Roman Catholic St. Martinus Church was built nearby. Since then, the old church has been used for concerts and exhibitions.

The Hagener Kirmes takes place every autumn in the entire town center. The traditional cattle market ("piglet market") always takes place on the Monday after Michaelmas (29 September). In 2014 it took place for the 400th time and on this occasion the Osnabrück Bishop Bode formally granted the community market rights for another 100 years.

While the volunteer fire brigade Niedermark has been organizing a "Dance in May" as a big tent party on April 30th every year in the Gellenbeck district for over 40 years , the volunteer fire brigade Hagen has been organizing the "Hagener Wiesn", which takes place every year at the beginning of September, based on Bavarian tent festivals. Nearly 95% of the 2000 visitors come in typical Alpine costumes .

In addition, every two years the Musikzug in the Wiesental Music Association organizes a three-day international music festival in spring, in which up to 2000 musicians take part.

Also every two years, an open-air festival was held in the center of the community for several years . The festival had around 6000 visitors in the summer of 2007. The organizer was the Hagen a. T. W. In 2009 the motto of the event was “ New Deutsche Welle Revival”, at which well-known NDW artists such as Markus and Hubert Kah performed. Due to a new tourism marketing strategy ("Kirsch-Gemeinde", "Kirschhagen"), the festival was realigned and has since taken place every two years as a two-day "Hagener Kirschfest". As the highlight of the cherry festival, the Hagen cherry queen is proclaimed on Sunday afternoon (see also the separate chapter "Hagen cherry queen").

In Hagen there are two larger sports clubs, the Hagener Sportverein (HSV) and the game association Niedermark .

In her youth, the former national soccer player Nicole Brandebusemeyer played in the soccer department of Hagener SV. She played a total of eight international matches. a. was a member of the German national team for the 1999 World Cup in the USA and for the Sydney Olympic Games (2000).

The Hagen Huskies women's basketball team played in the second national basketball league from 2003 to 2009 . In the 2006/2007 season, the playoffs were about promotion to the 1st Bundesliga. Only in the semifinals did they have to admit defeat to the Herner TC. At the beginning of the 2009/2010 season, the team withdrew voluntarily from the second division and is now playing in the 2. Regionalliga West (4th division).

In the 1980s, the men's table tennis team of Spvg. Niedermark celebrated successes in the second division . Bad Iburger Dieter Lippelt , who played in the club and was among other things table tennis senior world champion in the individual competition (2008; age group 70+) and in the men's doubles (2006; age group 65+), achieved international titles . Until 2010, Lippelt took part in all fifteen senior world championships held up to then.

Hagen has six shooting clubs and one archery club. The best-known member is the recurve archer Michael Frankenberg , who took part in the 2004 Olympic Games .

The most successful athlete in town is Nicole Hehemann . The trained judoka has already won a gold medal (2004) with the team as well as a silver (2007) and a bronze medal (2008) at the world championships in sumo wrestling for women. In 2007 she took second place and in 2010 third place in the individual and team competition of the European Championship. In March 2013, Nicole Hehemann won the gold medal in the individual and team competition at the EM sumo wrestler in Pönitz, Holstein . 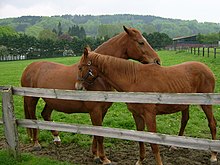 International equestrian competitions (u. A. " Horses & Dreams ") and equestrian competitions, there are regular on the grounds of "court Kasselmann" whose owner Ulrich Kasselmann together with the German jumping legend Paul Schockemöhle in the municipality Ankum annually, the largest international horse auction ( "PSI Auction ") Organized. In August 2005 the European Dressage Championships were held at the "Hof Kasselmann", where the German team won the gold medal.

Well-known and equally successful equestrian athletes in the area are father and son Jürgen and Christoph Koschel , who have lived in Hagen a. T. W. live and run the “Hof Beckerode” right next to the “Hof Kasselmann”. Christoph Koschel is currently one of the most successful German dressage riders.

After young rider Max Haunhorst had already won several important regional and national youth and junior titles in show jumping, he became German junior champion in show jumping in 2017 in Aachen and 2018 in Munich.

It is documented as early as the 16th century that sweet cherries were grown on a large scale in the municipality of Hagen . Around 1900 Hagen was one of the most important cherry-growing areas in Germany. The economic importance of cherry cultivation, which was carried out on large-crowned fruit trees, declined steadily, as intensive plantation fruit growing developed and established itself in Germany.

The municipality of Hagen participated in a BLE model project on the topic of sweet cherry diversity that was completed in 2010. As part of this project, 41 cherry varieties were pomologically identified in the old stock , 7 of which were previously missing. Hagen is a collection partner of the German Fruit Genebank .

To support the tourist orientation as a community in a traditional cultivation area for cherries , an honorary cherry queen has been proclaimed every two years since 2003 , who as the community's ambassador does representative tasks in community life , but also at national events (e.g. tourism fairs, " Green Week ") , Events of the German Queen Association).

Municipalities in the district of Osnabrück